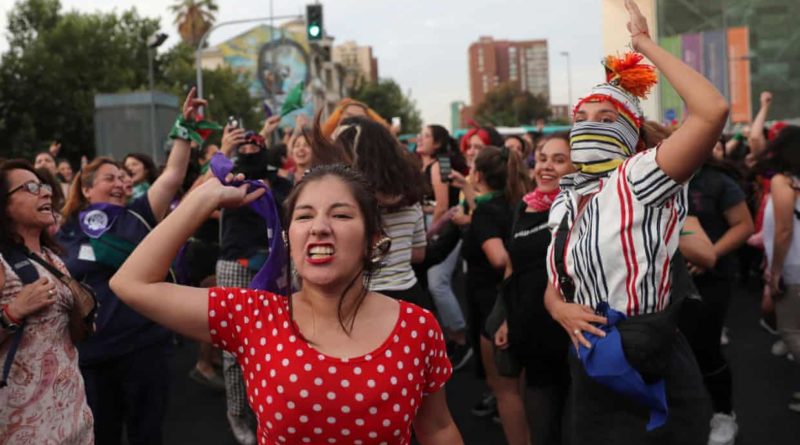 Sunday march expected to reignite wave of unrest that began in October over inequality, social injustice and high cost of living

More than a million women in Chile are preparing to join a massive protest this Sunday to mark International Women’s Day, in a march expected to reignite the wave of social unrest that began four months ago.

Anger over rising metro fares erupted in October into a series of nationwide protests against inequality, social injustice and the high cost of living. Violent clashes between protesters and police have resulted in more than 30 dead, thousands injured and 445 with eye injuries caused by police weapons – leaving 34 people blinded.

After a summer lull, Sunday’s march will be the first mass demonstration since New Year’s Eve. It is expected to be the first of several protests in the run-up to a historic referendum in April, when Chileans will vote on reforming the country’s Pinochet-era constitution.

“Social movements in Chile have always been pushed by women. Decades ago, during the dictatorship, women led the resistance – from organizing soup kitchens to fighting for human rights,” said Belén Calcagno, who is coordinating a group marching on Sunday in Concepción, a city in southern Chile. “Today our role continues to be central.”

The slogan “Nunca más sin nosotras” – Never again without us women – is often heard at protests, as female activists demand that women’s call for justice and equity should be as important as those for social and economic reforms.

Alondra Carrillo, spokesperson for the country’s largest feminist advocacy group, La Coordinadora Feminista 8M, said that as well as sharing the demands of the wider movement, Chile’s women are fighting for specific gender-related issues, such as legal abortion, an end to domestic violence, and for greater equality in the workplace.

“Women are permanently subjected to various forms of patriarchal violence, which is an integral part of the way in which Chile is organized,” she said.

That idea is also reflected in the anti-rape song by a Chilean feminist collective, which has become an anthem for protesters around the world. First performed last November, the song A Rapist in Your Path depicts a world in which state oppression mirrors sexual violence, and singles out police, judges and the president as accomplice in the aggression.

In Chile, as in other parts of Latin America, gender-based violence has reached epidemic proportions.

The Chilean Network Against Violence Towards Women calculates that an average of 130,000 cases of domestic violence are reported in Chile each year, making it one of the country’s “most reported crimes”. Each day, 42 cases of sexual abuse are reported to the police – only 25.7% of which result in judicial rulings. Last year, 46 women were murdered by their partners.

On Tuesday, during the inauguration of a new law to tackle femicide, Chile’s president, Sebastian Piñera, caused outrage by saying: “Sometimes it’s not just that men want to commit abuse, but also that women put themselves in a position where they are abused.”

Camila Vallejo, the former student protest leader who is now a member of the chamber of deputies, responded in a tweet: “Piñera continues to justify sexist violence. It is an offense for the families of the victims.”

Feminists say that Piñera’s rightwing government has done little to address women’s rights issues and has even further limited access for women to abort under the current restricted circumstances.

“I march because I want to feel safe. I’ve had friends that have been raped, or have had illegal abortions; they were so scared,” said Macarena Cortés, who runs a queer bar located next to Plaza Italia in Santiago, which has become a hotspot for feminist gatherings.

“We will all march for our own reasons. I’m a lesbian, so I march for a culture where they don’t kill us for being gay, or punch us for holding hands with someone we love” she said, referring to a spate of attacks on gay women in the past decade.

“But every woman will march for her own reasons, and on 8 March we will unite with a common demand: to be respected.”