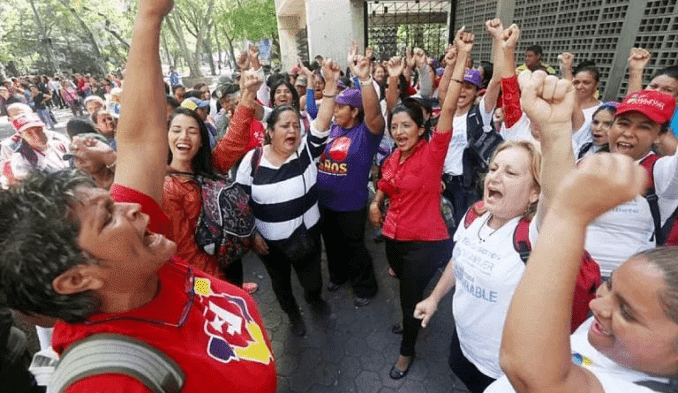 Editorial note: this is a transcript of a speech given by Venezuelan activist Laula Franco last year. It is still very relevant, specially because of the International Month of Women.

We believe that Venezuelan women have a lot to say to the women of the world. Thanks to this revolutionary process, we have gone from being invisible to being protagonists of the Revolution.

When we analyze this blockade and its effects, we always conclude that these actions are precisely aimed at attacking the significant achievements of the Bolivarian Revolution in the area of human rights, which have been materialized through laws and public policies of massive inclusion for all of the people, and in a strong popular organization around them in the exercise of participatory and protagonist democracy. They have had a radical impact on improving the quality of life for the Venezuelan population, and especially for women. That is why the criminal right and US imperialism have primarily attacked these great advances during the presidency of President Nicolas Maduro.

Those who attack the revolutionary process, the enemies of the Venezuelan people, are very clear that women in Venezuela represent a fundamental engine of this Revolution and of this struggle for socialism. In almost all community spaces the leadership is female. It is a reality, it is there, palpable. That is why women’s rights have been one of the main points of attack in this unconventional war in our country. The blockade has hurt our fundamental rights; the right to life, the right to a life free of violence, to health, to food, our economic rights. It is a war—an unconventional type of war but a war nonetheless—and wars always have women as spoils, as trophies of the invading troops, as cannon fodder of the adversary.

RELATED CONTENT: Right-wing Mayor of Chacao Withdraws Event Banalizing International Women’s Day After Strong Criticism
This has always been a besieged revolution, from the beginning when President Chávez assumed political power and won the presidency, and at the moment of his death; it has intensified in a forceful and accelerated way from 2013 onwards. The economic war began because the capitalists, the bourgeoisie was given the task of hiding and hoarding basic goods: food, medicines and personal hygiene products. The first products that disappeared were contraceptive pills, sanitary towels, milk for children. Venezuelan women suffered first-hand, especially in a country where 4 out of 10 households are run by single mothers.

Women as social leaders of the communities, of the communes and communal councils, have also suffered the opposition’s political violence. This violence was unleashed onto the streets in their terrorist acts that we call “guarimbas,” which occurred in 2013 when Maduro won the elections, again in 2014 during the entire first semester of the year, and in 2017 when they were defeated in the Constituent Assembly elections. The objective was to sow terror. In these violent actions, they murdered grassroots women leaders; women died as victims of this fascist violence imposed by the leaders of the Venezuelan opposition.

All of this takes place in this context of war, where the violence reaches homes and relationships because of the roles imposed by patriarchy. We have seen how femicides, hate crimes against women, have increased. The blockade has also affected our right to food, of course, like all Venezuelan people, but women generally have the culturally imposed responsibility of providing food to their daughters and sons, and other relatives. It is an attack that aims to demoralize women, that wants women to lose hope in their possibility of emancipation with the Revolution.

There was a time when the public health network provided free contraceptives for more than 40% of the women of childbearing age—a program which has been stopped, thanks to the blockade. It is directly affecting our sexual and reproductive rights due to the issue of women not being able to have access to family planning, because they do not have contraceptive methods at their disposal. In the most difficult years, like 2016, you definitely could not get—even having the money—you could not buy birth control pills or condoms. They disappeared from the shelves. Today the situation is different, that even if they have provisions, poor women cannot afford contraceptives due to speculative prices, and they have to prioritize the fundamental issue of buying food.

This of course has increased unwanted pregnancies in Venezuela. And also unsafe abortions, as in our country abortion is criminalized. It can only be decriminalised when the life of the mother is at risk. Of course, there is no woman imprisoned for having a clandestine abortion in Venezuela, but there is no public policy to attend to women who have been penalized for deciding to have an abortion. This is not justified in our context today. We must advance with these issues of interest to us; it is a struggle in the Venezuelan popular feminist movement. Now we are in a constituent process to legalize our rights. To leave behind conservative, religious postures, and attend to a reality that is the health and lives of women.

Almost 50% of the medicines that are imported come from hostile countries that are following the line of the blockade, and this affects the health of Venezuelan women. For example, in diseases such as cancer, where one of the main causes of deaths in Venezuela from cancer are breast cancer and cervical cancer, we see that we women are the main victims when we do not have access to this type of medicine.

This blockade also affects our labor and economic rights. Here we talk about the fact that Venezuelan women have a double, a triple, and even a quadruple hourly work day: salaried work, domestic work, community work—which is voluntary—and today there is a fourth type of work linked to the search to solve the economic problem that cannot be solved with wages alone. That work may involve waiting in line to buy a regulated product, or making food to sell—all of this occupies women with more work, it puts more weight on their shoulders.

So since we are at the center of the attack, we women are also at the forefront of our great mobilizations, of the defense of our Revolution, I believe that up until now they have not succeeded, nor will they succeed in demoralizing the Venezuelan feminist and feminine forces. This is a socialist and feminist Revolution. And we revolutionary feminists, socialists and Chavistas are not ashamed to say that it was thanks to Chávez that we took this route.

We are defenders of Hugo Chavez’s feminist legacy, and we continue in battle. We have great challenges: the constituent process is a challenge. Within our agenda there is also the struggle for a law of political parity, a 50-50 for the political participation of women, which does not exist in Venezuela. We do not even have a quota policy, so we are at a disadvantage. We are the leaders at the base, mobilizers of the revolutionary and Chavista vote, but we are not the ones in the decision-making spaces, we have not broken the glass ceiling, we have not surpassed a 30% political participation in positions of popular election as mayors, governors and in positions in the ministerial cabinet.

We want to expand sexual and reproductive rights and decriminalize abortion in our country. We are also fighting for the reform of the organic law on women’s right to a life free of violence. We want to incorporate some crimes that are not recognized right now, such as political violence; there is a reality in the neighborhoods that female leaders are being murdered. We also want to incorporate feminicide, which is different from femicide because it recognizes that the state, through inobservance, through not accompanying women, through not receiving a complaint, through not attending to the complaint, is a part of the process of victimization of women, including their deaths.

So in conclusion, we have advanced a lot thanks to the Revolution, and we are not willing to give up our rights. But we still have a lot to do because it is a revolution and we have great challenges ahead of us and only through the Revolution we are going to be able to achieve them. That is why we go all the way in defense of our Revolution. We will live and we will overcome. Long live Chávez!

Transcribed and translated by Jenny Bekenstein