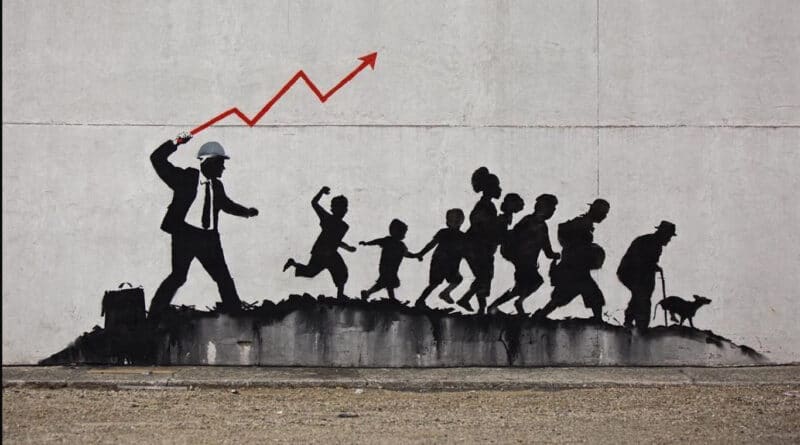 Within hours of a move which saw Small Street making money to the detriment of Wall Street, authorities rushed in to shut the system down, with free marketeers in the financial world suddenly demanding overnight.

There was widespread outrage as panicked authorities introduced a host of emergency measures to stop the continued financial rebellion started by Redditors on the Wall Street Bets subreddit. “Capitalism has no problem when the working class plays. But has an issue when the working class starts winning. The system is rigged,” wrote congressman Jamal Bowman. “Wall Street manipulates the market and rips off the public year in and year out, nobody bats an eyelash. The public manipulates the market and scores a little victory over Wall Street, there’s a freakout among the oligarchs nationwide. Tells you everything, really,” added Lebanese political analyst Sarah Abdallah.

Earlier, stock trading app Robinhood had not only announced it was blocking users from buying shares of GameStop, AMC, and other well-performing companies but also began forcing users to sell their shares en masse, without their permission. Messaging platform Discord shut down its Wall Street Bets community, citing a violation of “hate speech” laws. Meanwhile, Google wiped nearly 100,000 negative reviews of Robinhood left in their app store, restoring its good reputation.

“Just to recap: They locked everything down, bankrupted a video game store, forced everyone to stay home, and bailed out only the rich. Then the rich tried to make more money off the bankrupt video game store, but broke people stuck at home tried to stop them, so they shut them down,” wrote entrepreneur Dan Price.

Despite these measures, GameStop’s share price continued to rise, rallying from $197 at the end of trading on Thursday to $380 upon reopening today. Other “meme” stocks like AMC also spiked, increasing from $8.68 per share yesterday afternoon to $14.32 by Friday morning.

The events began when users of the financial subreddit r/wallstreetbets noticed that a number of hedge funds were short-selling the stock of video game store GameStop. Short selling is where an investor borrows shares and immediately sells them in the expectation that the price will go down in the future, enabling them to buy them and give them back at a lower price and pocket the difference. It is a common tactic on Wall Street and can be used as a tactic to drive down companies’ values.

Collectively, Redditors decided to buy the stock en masse, causing its price to soar and for hedge funds, who were legally obliged to buy back the stock, to lose billions of dollars. As more people began noticing what was going on, the temptation to collectively punish some of the largest Wall Street firms became too much for many, and GameStop’s prices continued to soar, causing untold pain to many of America’s richest traders.

Media call for clamp down after “attempted coup”

Former SEC Commissioner Laura Unger appeared to advocate for an even more widespread clamp down on the uprising. “What is the right thing to do to control this or to stop this?

Not unlike what we saw on January 6th, if you don’t have the police in there at the right time, things go crazy,” she told CNBC, comparing buying stocks to a possible attempted coup. CNN columnists Chris Cillizza and Frida Ghitis also both compared the two events.

Intimidating barriers have been placed around the Capitol, with its police chief calling for it to be permanently fenced off, in effect, for it to become a walled citadel. The nation’s capital is currently also under military occupation, with thousands of national guardsmen stationed there until at least the end of March. Both the financial rebellion and the Capitol storming suggest that 2021 will likely be as volatile a year for American society as 2020 was.

Many of the hasty measures taken against the traders have been justified on the grounds that they are keeping the public safe and to prevent the proliferation of false information. “We cannot control…the lightning fast spread of information and misinformation that takes place on social media,” said Vlad Tenev, cofounder of Robinhood.

Yet much of the misinformation is coming from establishment sources. Only last month Robinhood itself was hit with a $65 million fine for misleading its users as to the cost of trading stocks on its platform. It is now facing a class-action lawsuit over its conduct this week.

Meanwhile, a number of corporate media outlets, including the New York Post, the Daily Caller, and Fox News, published articles claiming that 22-year-old Indiana native Jack West had remortgaged his parents’ house (without their knowledge or permission) to buy $70,000 worth of GameStop and AMC stock. “LMFAOOOOO THEY BELIEVED ME,” reacted West. The organizations pulled the outlandish story after West’s deception went viral, garnering over 180,000 likes on Twitter alone. However, MintPress archived the Post’s article.

The redditors should take down a health insurance company every week until we get M4A.

Good for the Goose but not the Gander

While the story of organized individuals on Reddit banding together to game the system has made worldwide headlines, politicians doing the same thing for their own ends garnered less attention. Last year, just before the pandemic hit the United States, Senators of all persuasions began furiously dumping stock just before lockdown was announced. After being briefed on the ramifications of the new deadly disease, it appears the first thing they did was not ensuring their states were prepared, but placing calls to their brokers. More recently, Speaker of the House Nancy Pelosi bought at least $500,000 worth of Tesla shares just before President Biden announced his new plan to support electric vehicles. The shares have increased in value by over 40% since Pelosi’s decision.

While insider trading is illegal, being party to important information that others do not have is perhaps the only sure fire way to make money on the stock market. As a result, for decades, politicians’ portfolios have far outperformed those of even the most storied speculators. Using the financial disclosures of politicians from between 1985 and 2001, Professor Alan Ziobrowski of Georgia State University found that members of the House earn “abnormal returns” on their stocks, outperforming the market by six percentage points. Senators, in higher office than House members, performed even better, “showing some of the highest excess returns ever recorded over a long period of time, significantly outperforming even hedge fund managers,” in Ziobrowski’s study’s words. “It’s not rational to assume that they are just plain dumb-lucky,” he concluded. Between 1993 and 1998, senators’ stock portfolios beat the market by an average of 12% a year.

Very cool to name your app 'Robinhood' and then shut everything down immediately the one time people try to rob from the rich and give to the poor. https://t.co/1BWFGoLWin

One key individual in deciding what, if anything, to do about the stock market today is new Treasury Secretary and former Federal Reserve Chairman Janet Yellen. However, she herself is an actor in this, having received over $800,000 from Citadel Group, the hedge fund losing billions in the GameStop saga. Yellen was paid $810,000 between 2019 and 2020 for a handful of speaking fees. Despite this conflict of interest, she appears completely unwilling to recuse herself from advising the president on this issue.

Yellen appears to have the full backing of the White House. “Separate from the GameStop issue, the secretary of Treasury is one of the world renowned experts on markets, on the economy. It shouldn’t be a surprise to anyone she was paid to give her perspective and advice before she came into office,” said new White House Press Secretary Jen Psaki.

Others remained unconvinced. “Literally the world’s dumbest fucking people — the absolute dumbest, can’t get dumber — are those who don’t just claim but really believe Wall Street firms pay powerful politicians gigantic sums for banal 45 minute speeches because they want their wisdom rather than their servitude,” replied journalist Glenn Greenwald.

The GameStop rebellion and the panicked response appears to be convincing many that capitalism is a system where society is controlled for the benefit of those with capital. While the 2008 financial crash sank the world’s economy, regulation was few and far between, and, in some cases, took years to be implemented. Yet within hours of a move which saw Small Street making money to the detriment of Wall Street, authorities rushed in to shut the system down, with free marketeers in the financial world suddenly demanding overnight and government reform. “When hedge fund billionaires move markets, they get huge bonuses. When ordinary Americans move markets, they get shut down by Wall Street. The system is rigged,” said former Secretary of Labor Robert Reich.

Featured image:  A photo of a Banksy art piece in Brooklyn, New York. @Banksy via Instagram