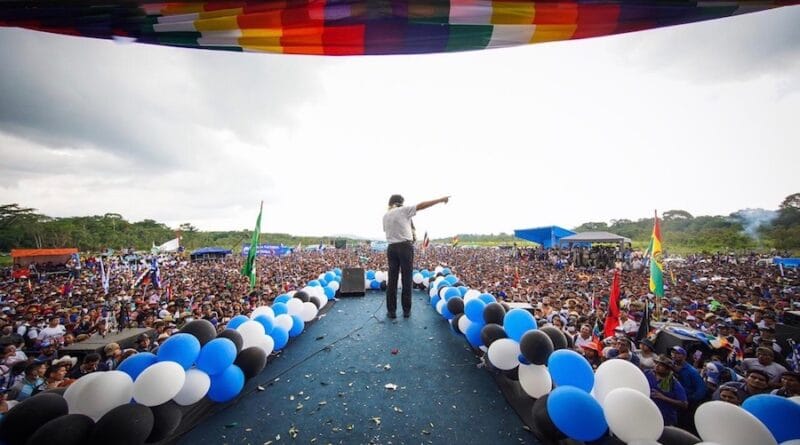 Evo Morales was welcomed by a rally with over a million Bolivians from across the country in the Chimoré municipality, in the Cochabamba department, on November 11. The grand rally was held to receive former Bolivian president Evo Morales in the place from where he was forced to leave Bolivia exactly one year ago after the US-backed civic-military coup against him.

Citizens, members of several Indigenous movements, peasant organizations and trade unions as well as international delegations and government officials came to Chimoré to attend the rally. A sea of national flags, Wiphala Indigenous flags and the blue flags of Morales’ party, the Movement Towards Socialism – Political Instrument for People’s Sovereignty (MAS-IPSP) was seen at the rally. The event was organized by the Six Federations of the Tropic of Cochabamba.

RELATED CONTENT: “We are in Power Now”: Evo Morales Makes Gleeful Return to Town He Fled

Morales arrived in Chimoré after a 3-day-long journey, traveling for over 1,100 kilometers and passing through the departments of Potosí, Oruro and Cochabamba. He began the journey on November 9, the day he returned to Bolivia from Argentina. Along with Morales, former vice president Álvaro García Linera also returned to his country and joined the rally in Chimoré.

“A year ago we left from the Chimoré airport and we said that we would return in millions. Here we are, millions, today. On behalf of the victims of the massacres, the persecuted and exiled, on behalf of all those who suffered, we thank you sisters and brothers for not abandoning us,” Morales wrote in a tweet.

While addressing the crowd at the rally, Morales thanked the citizens for their persistent support, for fighting the right-wing coup and defeating imperialism with democracy. He also thanked the governments of Mexico and Argentina for providing asylum to several former Bolivian officials and their families.

He also talked about continuing the struggle against imperialism and fascism and strengthening national and regional unity. He also called to relaunch the Union of South American Nations (UNASUR) to face the Organization of American States (OAS).

Morales reaffirmed that the democratically elected government of Luis Arce and David Choquehuanca of the MASwill return the dignity, sovereignty, independence and stability of all Bolivians.

The former president will settle in the Tropic of Cochabamba, resume union work and continue to support the MAS’ transformation process from there with his experience.

Featured image: Over a million Bolivians joined the massive rally held in the Chimoré municipality to receive former Bolivian president Evo Morales in the place from where he was forced to leave the country exactly one year ago.