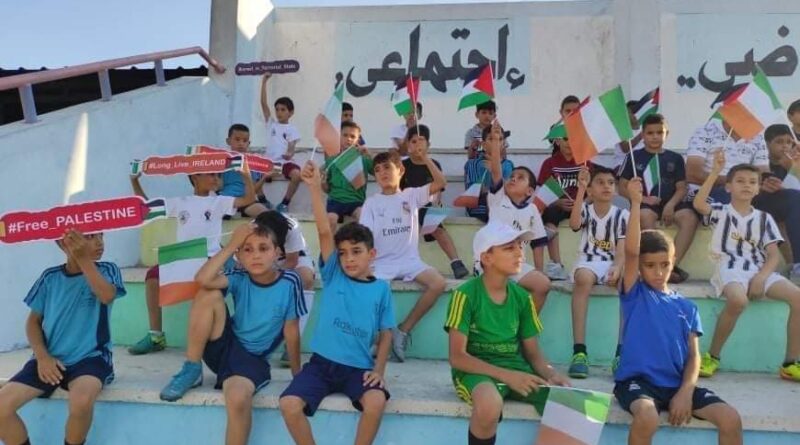 In 2010 a group of international activists joined Mr. George Galloway on his Viva Palestina 5 medical aid convoy to Gaza.

Their aim was to break the illegal siege, bring much-needed aid, medical equipment, and supplies to the people in distress. To bring hope, help, solidarity, and compassion to those living under a brutal medieval siege illegally imposed upon them by the apartheid state of Israel.

Nearly 2 million souls hemmed into a piece of land the size of the Ards peninsula 26 miles by 6 miles surrounded by land, sea, and air by the Zionist army, navy, and air force. Subjected to regular attacks.

Operation Cast Lead was carried out by Israel over the Christmas and new year period from December 27- 2008 to January 18 -2009. It killed an estimated 1,391 Palestinians to include 344 children.

The vast majority of those murdered by Israel were unarmed civilians.

According to btselem.org 759 were unarmed civilians including 110 women. 111 of those killed were over 50 with only three of them attested to have been combatants .251 police training cadets died in the first bombing raid including the Chief of Police with over 700 injured.

While figures may vary slightly what is not in doubt is the barbaric, brutal, inhumane targeting of civilians and the civic structures of society in Gaza.

Police officers are never viewed in war as combatants. They are part of the civilian government.

No Israeli civilians were killed by Palestinians. Five IDF soldiered were killed in the conflict.

The Mavi Marmara was a flotilla of ships that was organized by a Turkish Charity to bring wheelchairs and medicine to Gaza in response to this attack and break the illegal siege.

The ‘Gaza Freedom Flotilla’ was boarded by Israel commandos in international waters and nine humanitarian activists were murdered as the Zionist army landing on the ships from attack helicopters stormed the peaceful flotilla.

One young Turkish American citizen, Furkin Dogan, a medical student in America dreamed of curing blindness in Africa. His vision died that day at the end of an Israeli gun on May 31, 2010.

This unprovoked brutal assault in international waters seen by many as an act of piracy by Israel galvanized Galloway and others to respond with a land convoy.

After 15 days of waiting in Syria for permission to enter Egypt and onwards to Gaza the convoy arrived at the Rafah border crossing entering Gaza on October 21, 2010, leaving October 24, 2010.

250 vehicles representing the best of humanity from Malaysia to New Zealand, from Lebanon to Qatar were joined by eight Irishmen with four vehicles.

The Belfast crew brought a 13 seated wheelchair-accessible minibus to donate to the Al Awda hospital in Gaza city.

Upon our return to Ireland, some of the international convoy members set up a group called Palestine Aid.

While the membership has fluctuated with time it remains a registered charity.

With the latest Israeli attack upon Gaza causing untold suffering death and despair to include massive homelessness due to the targeting of civilian properties in an unprecedented act of collective punishment, Palestine Aid is once again trying to help those most in need on the ground in Gaza.

Having previously raised 10,000 pounds for a solar panel project for an orphanage and having supported 3 scholarships at the Islamic University in Gaza, we recently sent donations totaling 5,442 dollars.

These monies have helped families, individuals, and groups on the ground.

We funded a day at the beach for 60 children to include organised games, lunch, and souvenirs. Money to a  medical clinic that needed funds to service vital equipment, food for families in need, rent, and financial assistance.

Children are bearing the brunt of the psychological trauma evidenced by Israel’s continued aggression. Any child over 13 has been subject to 4, yes 4 wars on Gaza since 2008.

Our representatives on the ground have recently held a sports day for over 80 children to include a football and Karate tournament. Their families attended as did the local Mayor and civic leaders.

These events are designed to uplift the morale of the children who want nothing more than to have a childhood free from violence, free from bombings, and free from fear.

Isn’t that what every parent wants?

If you could help with a fundraiser, a monthly standing order, please contact us or donate to Palestine Aid Danske Bank 95-06-79 account number 90022365

We are currently fundraising to buy 5,000 copybooks for school children. We hope to give 500 kids a ruler, pencil, erasure, and ten copybooks at the beginning of the new school term on August 15, 2021.

Everyone connected to Palestine Aid both here and in Gaza is an unpaid volunteer.