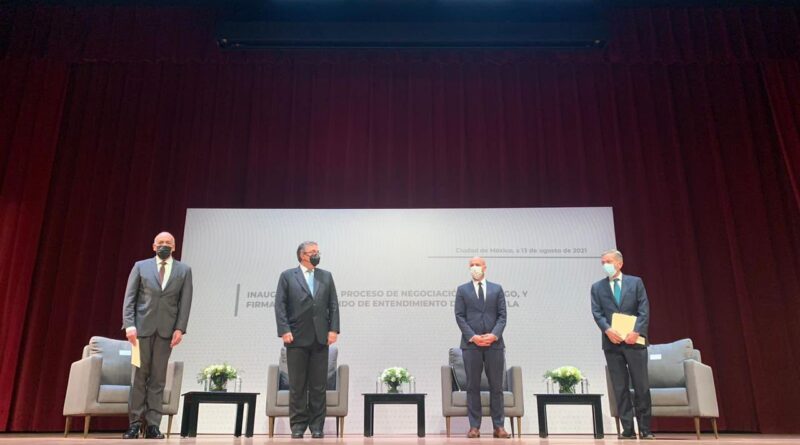 Caracas, August 13, 2021 (OrinocoTribune.com)—The president of Venezuela’s National Assembly and representative of the national government for the Mexico Talks, Jorge Rodríguez, arrived in Mexico City this Friday, August 13, to start the negotiation process with the Venezuelan extreme-right opposition.

Rodríguez, who will be in charge of directing the dialogue between both political sectors, arrived at Toluca International Airport at noon (local time). During the inauguration Rodríguez celebrated the realization of the Talks and stressed that it has been shown that Venezuelans do not yield to any kind of pressure.

“We have shown that Venezuela is not managed based on pressure,” said Rodríguez during his speech to launch the dialogue process in Mexico City. “With us the word [a promise] works, the frontal lobe [of the brain], that is the lobe of agreement, of dialogue, of negotiation.”

After his arrival, Mexico’s Secretary of Foreign Relations, Marcelo Ebrard, welcomed both delegations (government and opposition):

“I give the warmest welcome from Mexico to the delegations that will participate in the inauguration of the negotiation and dialogue process, and the signing of the memorandum of understanding of Venezuela. We receive them with all appreciation and gratitude,” Ebrard wrote in a message on Twitter.

The first  and inaugural meeting of this day of dialogue took place at the Museum of Anthropology, located in the Bosque de Chapultepec area, Mexico City. The rest of the members of each delegation continued to arrive during the afternoon. From the government side the governor of Miranda state, Héctor Rodríguez, and the deputy to the National Assembly, Nicolás Maduro Guerra, were among the attendees.

For its part, the Venezuelan opposition was represented by former deputy Stalin González, the head of Primero Justicia, Tomás Guanipa, the political leader Gerardo Blyde, and a representative of former deputy Juan Guaidó, Carlos Vecchio.

The Ministry of Foreign Relations of Mexico reported that the dialogue table was expected to be installed at 4:30 p.m. local time. For this meeting, strict biosafety and health protocols were followed by the representatives of the media present in order to prevent the spread of COVID-19.

The Venezuelan government sits down for the fifth time with the extreme-right opposition to debate and agree on at least seven points, which are established on the agenda.

This is the second time that Norway has been the mediator of the dialogue between both sectors, in a scenario of political stability on the part of the Venezuelan government, while the opposition is in a state of clear internal confrontation and pronounced weakness.

The talks that began this Friday and will last for the next three days will include the active participation of Russia and the Netherlands at the table. However, the US will also be there, in addition to Canada, Germany, Turkey, and Bolivia as companion countries.

In the afternoon, during the inauguration ceremony hosted by the Mexican chancellor Marcelo Ebrard, all representatives signed an agreement consisting of seven key issues:

1. Political rights for all.
2. Electoral guarantees for all, electoral schedule for observable elections.
3. Lifting of sanctions and restoration of the right to Venezuelan assets.
4. Respect for the Constitutional State of Law.
5. Political and social coexistence, renunciation of violence and reparation for victims of violence.
6. Protection of the national economy and social protection measures for the Venezuelan people.
7. Guarantees of implementation, monitoring, and verification of what has been agreed to.

On repeated occasions the President of Venezuela, Nicolás Maduro, has detailed that for this dialogue the list of requests from the national government are:

• The immediate lifting of sanctions and economic blockade.
• The recognition of State institutions.
• The renunciation of violence and conspiracy.
• The incorporation of all the oppositions into the talks.

Meanwhile, the opposition requests improvements in the conditions for the elections and presidential elections.

Alleged controversy over Vecchio
During the afternoon, social media platforms in Venezuela tried to spoil the significance of the meeting with unconfirmed reports of an alleged disagreement of the government delegation with Carlos Vecchio’s participation. Right-wing activists, influencers, and media spread the rumor, without providing any evidence of the claim, in an attempt to create unnecessary controversy. Vecchio’s name was already in the list of possible candidates several days before the Talks.

It is important to highlight that many extreme right-opposition activists and sympathizers see the participation of their political leaders in the Mexico Talks as a sign of weakness and—according to them—a capitulation to the strength of Maduro’s government. For this reason, many analysts have stressed the importance of as many international companions as possible to accurately document a negotiation likely to be bombarded with rumors and manufactured controversy from the very beginning.