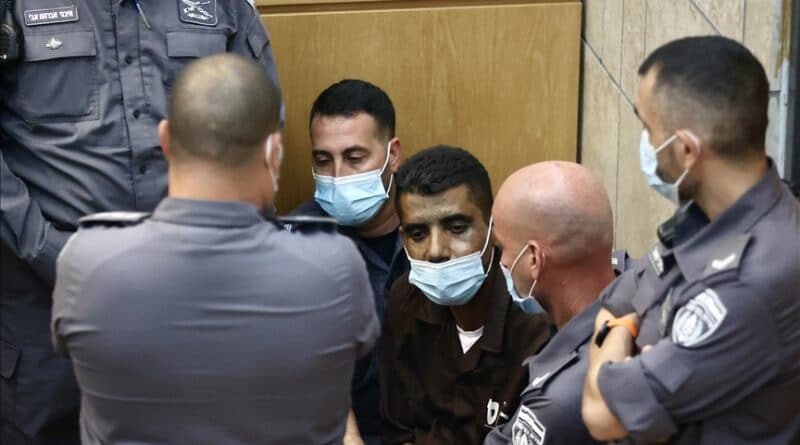 Editorial note 1: Orinoco Tribune takes its sources and fact-checking very seriously. This article is based on a report published by The Cradle, and we updated it with another news piece posted by Iranian outlet HispanTV. After several complaints on our social media accounts we initiated a fact-checking analysis to get deeper into this statement regarding Al-Zubaidi’s “brain death” and there are confirmations in this regard by Prime Time Zone along with Telesur English. Sadly there are no official statements at this time regarding the health condition of Zakaria al-Zubaidi, but taking into consideration IDF’s record we prefer to keep this article active until further details are announced. MintPress News also reported about the contradictory details of this case. They opted for taking down a piece in which they had reported Zubaidi’s death, out of respect for relatives and activists, but we have decided to keep this post online until proof of Zakaria’s well being is presented from reliable sources. (UPDATED Saturday, September 18 at 12:26 am, EST).

Editorial note 2: On Sunday, September 19, new photos of a video-conference hearing have been posted online by a few outlets with four of the escapees in court. Zakaria Zubeidi is in one of them. We are in the process of updating this same post and changing the headline leaving visible all of our editorial notes for transparency’s sake. This is disregarding the fact that only a few photos have been posted, these photos are not absolute evidence on Zubeidi’s well-being, and we did not see a clear date on the TV screen. We are adjusting this news piece because it was reported on a very respectable IG account, Eye on Palestine, (https://www.instagram.com/p/CT_03mltyZu). Our one and only interest is to be in solidarity with the Palestinian people and to be alert on abuses against the Palestinian people, exposing, at the same time, the constant violation of human rights by Israeli occupation forces. (UPDATED Sunday, September 19 at 7:02 pm EST).

On Monday, September 13, Zakaria al-Zubaidi, one of the six Palestinian detainees who had escaped an Israeli maximum security prison last week, allegedly suffered brain death in hospital, reported Palestinian media. He allegedly was transferred to the intensive care unit of a hospital on Monday after being severely tortured by Israeli occupation forces.

After contradictory reports and claims from Zubaidi’s lawyer and his brother, along with some complaints from our readers, Orinoco Tribune wrote several editorial notes (above) clarifying the sources used for publishing this piece. On Sunday, September 19, photos of the escapees were made public as they were presented in a Nazareth court, and they seem to show Zakaria al-Zubaidi alive and conscious, so the claim of him having suffered “brain death” was proved false.

The news came just two days after his capture, at which time he was reportedly beaten by Israeli security forces. On Sunday, September 12, Zubaidi’s brother Jibril al-Zubaidi took to social media to report that since the re-arrest, Zakaria had been “subjected to the most extreme forms of torture,” adding that the Israelis “beat him, electrocuted him, and broke his leg.” He also reported that his brother had not been allowed to sleep by prison authorities.

Palestinians have been gathering in Jenin city, hometown of al-Zubaidi, in occupied West Bank, to show their support for Zubaidi and other Palestinian prisoners and to condemn the acts of occupation authorities.

Earlier, Palestinian resistance movement Hamas had announced that occupation authorities would be held responsible for any harm done to the captured escapees.

Zakaria al-Zubaidi, along with five other Palestinian prisoners, escaped from the maximum security Gilboa prison near Nazareth in northern occupied Palestine on September 6. Last weekend, however, he and three other inmates were found and rearrested by Israeli forces.

Zubaidi’s defense lawyer, Avigdor Feldman, had also asked the court to transfer Zubaidi to a hospital for treatment, denouncing that Israeli police officers hid Zubaidi’s face from cameras during Saturday’s court session to prevent his injuries from being seen.

According to an exclusive report by The Cradle, Zubaidi, former commander of the Al-Aqsa Martyrs Brigades, had a long history of armed resistance and had been a political prisoner earlier. In 2002, he was given amnesty at the close of the second intifada after Operation Defensive Wall was concluded, and was then forced to undergo a “rehabilitation process.” In 2019 he was re-arrested for shooting at illegal Israeli settlements in the West Bank.

Since last week’s daring escape, Palestinians across the occupied territories have conducted marches to show their support for the detainees and to condemn Israeli violence. In response, occupation authorities have bombed the Gaza Strip multiple times over the past few days and raided dozens of homes in the occupied territories and arrested relatives of the escapees.

The latest news of Zubaidi came at a time when almost 1,400 Palestinian prisoners in Israeli jails are to begin an indefinite hunger strike this Friday, demanding an end to mistreatment, relocations and administrative detention policy, according to WAFA News.

Note: This post was updated and corrected on Sunday, September 19 at 7:11 pm (Caracas time).