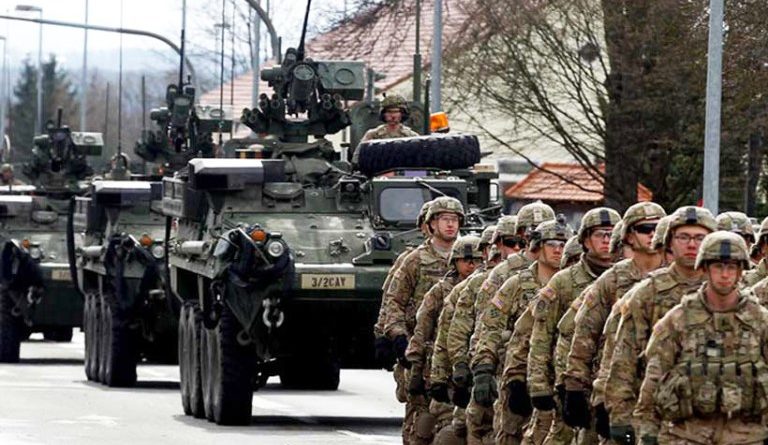 The coronavirus, a new strain of the already existing one, whose mutation is being investigated has put the world between the solidarity and the misery of a dying system, capable of using the effects of a pandemic to impose a state of terror at a global level and to justify a stock market crisis in the United States, Japan, Europe, and others. Meanwhile, they are contradictory concentrating 37 thousand soldiers to conduct a maneuver in European territory, violating quarantines and any measure of control of the pandemic recognized by the World Health Organization (WHO).

In addition to the serious accusations about the possibility that this virus has been produced in laboratories and disseminated precisely in the center of China – to irradiate the whole country- by this time in Iran or Italy 20 thousand American soldiers are arriving in several European countries. They will join the ten thousand stationed in the US military bases in Europe and another seven thousand provided by that region for a great maneuver destined to “show muscle” to Russia and China.

This arrival of troops for the ‘Defend Europe 20′ maneuvers casts doubt on the effectiveness of the worldwide quarantine and it is surprising that these exercises involving the transfer of soldiers to the European front have not been canceled considering the magnitude of the circumstances.

From the point of view of the use of biological warfare, to which the United States has resorted to several times -not forgetting hemorrhagic dengue, swine fever and others used against Cuba- and which is supported by its Israeli partner, this could be the perfect test of how the Chinese giant obsessed with imperial power would react and how the world would act in the face of this situation, which is characterized by an “uncontrollable” virus but less lethal than the common epidemics of flu and pneumonia.

For now, the powerful are blaming the pandemic for their economic woes, but, “the economy was already sick. The coronavirus is further proof that it is only sustained by continuous doping,” says Eric Toussaint, a political scientist, and professor at the universities of Liège and Paris who heads the Committee for the Abolition of Illegitimate Debt (CADTM).

Toussaint punctiliously analyzed everything that has happened in the stock market falls of these big countries, especially since the last week of February 2020, the worst week since the crisis of October 2008.

“All the factors for a new financial crisis were and are present and together for several years, at least since 2017-2018. When the atmosphere is saturated with flammable materials, at any moment, a spark can cause a financial explosion. It is difficult to predict where the spark may occur. The spark is like a detonator but it is not the root cause of the crisis. We do not yet know whether the sharp stock market crash of late February 2020 will “degenerate” into a huge financial crisis. But it is a real possibility,” Toussaint says.

He also warns “that it is important to see where the crisis really comes from and not be fooled by explanations that constitute a smokescreen for the real causes”.

While what is being seen in Europe is nothing more and nothing less than the unmasking of the destruction of the welfare system, which, with its casualties and its upsurges, had managed to settle in those countries. There was a certainty – which never existed in our region – that this had been acquired forever.

No one comments on the enormous embezzlement that the expenses of the colonial wars in this 21st century meant for each of the European countries. From the beginning, the United States was clear with its partners in the North Atlantic Organization (NATO); “we have the necessary weapons, but you must pay for them.”

How much did Europe sacrifice to take on a war with invasions and occupation of countries with which it could negotiate and obtain products such as oil paid for in euros, convenient for both sides and in peace?

The wars of colonial occupation against Afghanistan, Iraq, Libya, Syria, Yemen (both still ongoing) and others in preparation, have not only destroyed countries with the loss of millions of lives, humanitarian disasters but also destroyed historical sites, cities that were heritage of humanity, cradles of civilization, violating all the rights of victimized nations and international laws, protected by scandalous impunity.

These unilateral colonial wars have been a tragedy for the people of Europe, who have been victims in addition to neo-liberal impositions. In order to pay for the sophisticated weapons and equipment of the latest technology, European governments may have used up the almost 290 billion euros that they stole from the Libyan state as jackals, since they were placed in European banks in the face of the US blockade.

The biggest “beneficiaries” in these high crime colonial wars are the arms and equipment manufacturers in the U.S. and Israel.

Even American economists had warned that these wars, whose strategies were mapped out in the halls of the Pentagon, were also destined to wipe out the competitive capitalist bloc that could be the European Union. In addition to meaning war against the euro that has been defended by the top of her lungs by Germany’s Angela Merkel, Europe’s most political capitalist ruler.

In the end, the humanitarian disaster that the invasions and occupations has meant that these wars left at the gates of Europe millions of immigrants, desperate, hungry, and homeless, without a country, without a homeland. One only has to look at the figures of international organizations before these brutal invasions to understand that, as in Libya or Syria, these populations had a standard of living that was sometimes higher than that of an ordinary European citizen.

Fleeing from war, helpless international bodies, thousands of desperate people were swallowed up by the sea or destined to live as abused beggars on the borders of horror. What did Europe gain from all this? Who is leading the occupation of these countries? Who appropriated the oil and other territorial wealth?

The Virus that paralyzed the world

Since the beginning of March, the Chinese Foreign Ministry has maintained that the U.S. Army could have taken the coronavirus to the city of Wuhan, the one most affected by the outbreak, where in October 2019 these soldiers carried out military maneuvers.

“When did patient zero start in the United States? How many people are infected? What are the names of the hospitals? It could be the U.S. Army that brought the epidemic to Wuhan,” says a message written on Twitter on March 9 by Chinese Foreign Ministry spokesman Zhao Lijian.

For his part, Philip Giraldi, a former agent of the Central Intelligence Agency (CIA) interviewed by Hispan TV, stated that his country could have created this virus as a weapon of war to harm China and Iran. In the case of Italy, several analysts pointed out that this is the first European country to sign so many important agreements with China, which angered Washington.

The Iranian military also denounced that several studies show, “that it is possible that the COVID-19 virus is a new strategy and form of a war of the United States and allies against their enemies, to generate deaths, destabilization, and instability”.

The international analyst Jose Jofré Leal also warned that it is not a question of “new strategies and new forms of war” since according to the research and studies in this area, “elements of conventional warfare, irregular warfare, biological warfare and cyber warfare” are combined.

He also referred to statements made by the leader of Iran’s Islamic revolution, Ayatollah Seyed Ali Khamenei, who ordered a mobilization to face biological warfare on the hypothesis that the COVID-19 outbreak is such an attack, arguing that the United States would be using the new coronavirus as a biological weapon. “Above all, the Chinese themselves have admitted the possibility that U.S. troops have incorporated the coronavirus into China,” he said, referring to the maneuvers they conducted in Wuhan.

Robert Redfield, director of the U.S. Centers for Disease Control and Prevention (CDC), publicly admitted on March 11 that some Americans, who apparently died of influenza, tested positive for the new coronavirus in the final diagnosis.

Similarly, Russian Foreign Ministry spokeswoman Maria Zarajova considered the U.S. accusations against Russia for the virus to be “deliberately false,” recalling that U.S. Commerce Secretary Wilbur Ross told the Chinese newspaper Global Times in February that he saw the virus as “an opportunity” that could help the recovery of U.S. jobs in the midst of the trade war between Washington and Beijing.

In this same context, the World Health Organization warned that the time to eradicate the coronavirus, which has become a pandemic, is getting shorter – not so much because of the lower mortality figures than the seasonal flu and pneumonia – but because of the number of countries affected, expressing special concern for the cases that occurred in Italy, which do not have a “clear epidemiological link” with what happened in China.

In this context of multiple situations, the system’s resources hide truths and, faced with a humanitarian tragedy, they do not hesitate to manipulate information and use it as a weapon of blind warfare.

In the midst of so many shadows from a small island in the Caribbean, blocked by the world’s greatest power, Cuba, the medicines that have made it possible to control this disease in China, associated with the Cuban government to produce medicines in a large Chinese laboratory, have gained prominence.

While the ultra-right-wing and coup governments in Latin America have deprived their populations of the only medical treatment they have received throughout their lives from the hands of the sacrificed Cuban doctors, as has happened in Brazil, Bolivia, and other places, condemning their own people to abandonment in health, Italy asked the Cuban government for its medical help. These are the lights and shadows of a moment of extreme fragility that the world is experiencing and of which it is clear that solidarity is the greatest antidote, but also the certainty that we cannot allow war to continue to be played out, which we know means the end for humanity.

Featured image: 20,000 US troops arriving in Europe in the midst of COVID-19