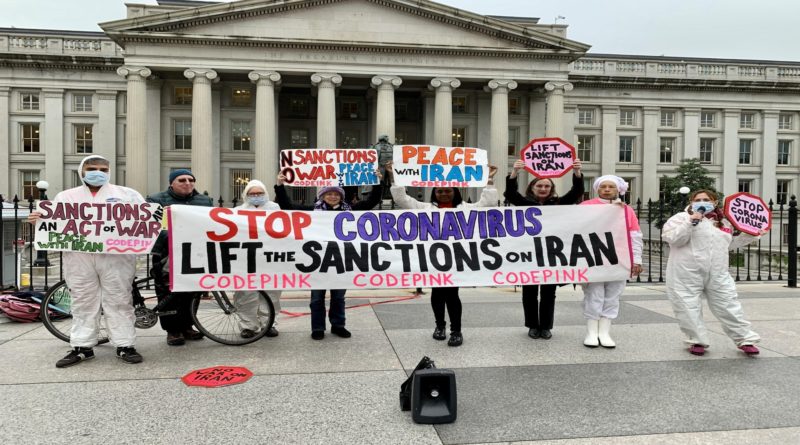 Is this not the time for the imperialist bloc, led by the United States of America, to end the sanctions against Cuba, Iran, Venezuela, and a series of other countries?

Swiftly moves the Coronavirus disease (COVID-19), dashing across continents, skipping over oceans, terrifying populations in every country. The numbers of those infected rises, as do the numbers of those who have died. Hands are being washed, tests are being done, social distancing has become a new phrase. It is unclear how devastating this pandemic will be; certainly, the experience of the 1918-1920 Spanish Flu hangs heavily, when one in three people (500 million) contracted the flu and 150 million people died. If those proportions remain in our time, then 2.5 billion people would contract the disease and three-quarters of a billion people would die. These numbers are horrifying.

In the midst of a pandemic, one would expect that all countries would collaborate in every way to mitigate the spread of the virus and its impact on human society. One would expect that a humanitarian crisis of this magnitude would provide the opportunity to suspend or end all inhumane economic sanctions and political blockades against certain countries. We are dancing around the main point: is this not the time for the imperialist bloc, led by the United States of America, to end the sanctions against Cuba, Iran, Venezuela, and a series of other countries?

Medical shortages
Venezuela’s Foreign Minister Jorge Arreaza told us recently that the “illegal and unilateral coercive measures that the United States has imposed on Venezuela are a form of collective punishment.” The use of the phrase “collective punishment” is significant; under the 1949 Geneva Conventions, any policy that inflicts damage on an entire population is a war crime. The US policy, Arreaza told us, has “resulted in difficulties for the timely acquisition of medicines.”

On paper, the unilateral US sanctions say that medical supplies are exempt. But this is an illusion. Neither Venezuela nor Iran can easily buy medical supplies, nor can they easily transport it into their countries, nor can they use them in their largely public sector health systems. The embargo against these countries—in this time of COVID-19—is not only a war crime by the standards of the Geneva Conventions (1949) but is a crime against humanity as defined by the United Nations International Law Commission (1947).

In 2017, US President Donald Trump enacted tight restrictions on Venezuela’s ability to access financial markets. Two years later, the US government blacklisted Venezuela’s Central Bank and put a general embargo on Venezuelan state institutions. If any firm trades with Venezuela’s public sector, it could face secondary sanctions. The US Congress passed the Countering America’s Adversaries Through Sanctions Act (CAATSA) in 2017, which tightened sanctions against Iran, Russia and North Korea. The next year, Trump imposed a raft of new sanctions against Iran which suffocated Iran’s economy. Once more, access to the world banking system and threats to companies that traded with Iran made it almost impossible for Iran to do business with the world.

In particular, the US government made it clear that any business with the public sector of Iran and Venezuela was forbidden. The health infrastructure that provides for the mass of the populations in both Iran and Venezuela is run by the state, which means it faces disproportionate difficulty in accessing equipment and supplies, including testing kits and medicines.

Breaking the embargo
Arreaza, the Venezuelan foreign minister, told us that his government is alert to its dangers. Vice-president Delcy Rodríguez is leading a presidential commission to manage whatever resources are available. “We are breaking the blockade,” Arreaza said, “through the World Health Organisation, through which we have obtained medicine and the tests to detect the illness.” The WHO, despite its own crisis of funds, has played a key role in both Venezuela and Iran.

Nonetheless, the WHO faces its own challenges with sanctions, particularly when it comes to transportation. These harsh sanctions forced transportation companies to reconsider servicing both Iran and Venezuela. Some airlines stopped flying there, many shipping companies decided not to anger Washington. When the World Health Organisation tried to get testing kits for COVID-19 from the United Arab Emirates (UAE) into Iran, it faced difficulty—as the WHO’s Christoph Hamelmann put it—“due to flight restrictions”; the UAE sent the equipment via a military transport plane.

Likewise, Arreaza told us, Venezuela has “received solidarity from governments of countries such as China and Cuba.” This is a key issue. China, despite its own challenges from COVID-19, has been supplying testing kits and medical equipment to Iran and to Venezuela; it was China’s vigorous reaction to the virus that has now slowed down its spread within the country itself. In late February, a team from the Red Cross Society of China arrived in Tehran to exchange information with the Iranian Red Cross and with WHO officials. China also donated testing kits and supplies. The sanctions, Chinese officials told us, should be of no consequence during a humanitarian crisis such as this; they are not going to honor them.

Meanwhile, the Iranians developed an app to help their population during the COVID-19 outbreak. Google decided to remove it from its app store, a consequence of the US sanctions.

End the Sanctions
Yolimar Mejías Escorcha, an industrial engineer, tells us that the sanctions regime has put a lot of pressure on everyday life in Venezuela. She says that the government “continues to make an effort to ensure that people who most need it get health care, education, and food.” The opposition has tried to say that the crisis is a consequence of the government’s inefficiency rather than a result of the imperialist blockade on Venezuela. Last week, she tells us, a new campaign was launched in the country called “Sanctions Are a Crime.” She hopes that this campaign will explain clearly to people why there are shortages in her country—the sanctions being the core reason.

In 2019, a group of countries met at the United Nations in New York to discuss the US unilateral sanctions that violated the UN Charter. The intent was to work through the Non-Aligned Movement to create a formal group that would respond to these sanctions. Foreign minister Arreaza told us that Venezuela supports this initiative but also the declaration of principles drafted by Iran against unilateralism and the Russian formal complaint about denial of visas for officials to visit the UN building in New York. “We hope to resume meetings this year once the difficulties presented by COVID-19 are overcome,” he said. They want to meet again, Arreaza said, to “advance joint, concrete actions.”

What Arreaza told us are initiatives at the inter-state level. At the same time, there are ongoing initiatives led by popular movements and political organizations. In November 2019, an anti-imperialist solidarity meeting was held in Havana (Cuba) with representatives from 86 countries. At this meeting, it was decided that attention must be focused on the inhumane use of power in our time. A call was sent out to hold a week of anti-imperialist struggle between May 25 and May 31. The aim of the week is to alert the world’s public about imperialism and—in this context—about the murderous sanctions regime driven by the United States, more murderous in this time of COVID-19.

The question that a week of activities such as this poses is quite simple: what kind of moral fiber holds together an international system where a handful of countries can act in a way that goes against all the highest aspirations of humanity? When the United States continues its embargoes against over fifty countries — but mostly against Cuba, Iran, and Venezuela — when there is a global pandemic afoot, what does this say about the nature of power and authority in our world? Sensitive people should be offended by such behavior, its mean spiritedness evident in the unnatural deaths that it provokes. When the US Secretary of State Madeleine Albright was asked about the half million Iraqi children who died because of US sanctions, she said that those deaths were “a price worth paying.” They were certainly not a price that the Iraqis wanted to pay, nor now the Iranians or the Venezuelans, or indeed the majority of humankind. We march in May against this desiccated worldview; we march for humanity.

Paola Estrada is in the Secretariat of the International Peoples Assembly and is a member of the Brazilian chapter of ALBA Movements (Continental Coordination of Social Movements towards the Bolivarian Alliance for the Peoples of Our America).

Featured image: Activists from Code Pink stage a protest in front of the US treasury department demanding the lifting of sanctions on Iran.