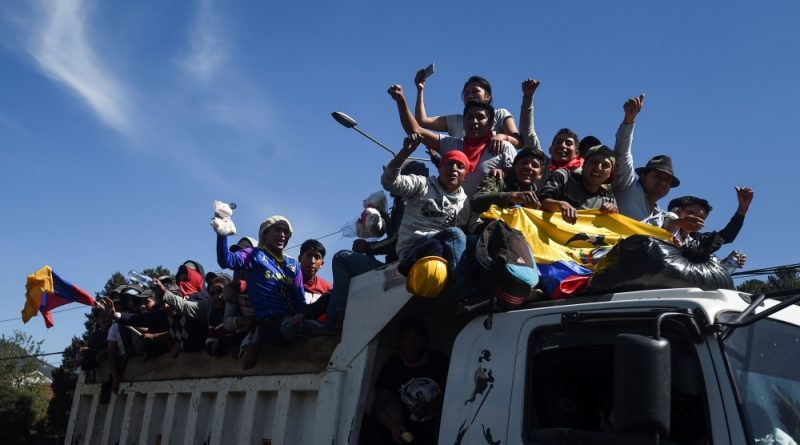 After ten people were reported killed on the streets of Ecuador, together with about 2,000 people injured and a large number imprisoned, an agreement was reached between the Lenin Moreno government and protesters against a controversial Decree 883 that had the footprint of the neoliberal austerity policies of the IMF.

For the time being the “dialogue” that lead to the derogation of the decree has defused the danger of an escalation of the general strike that was looming over the Moreno administration. But for how long?

It was a matter of time before the situation in Ecuador reached the point of political tension experienced in the last few weeks. The people of Ecuador have massively organized protests in rejection of the economic policies taken by the Lenin Moreno government at the beginning of October; protests that have been met by government imposed military curfew and repression.

The tipping point has been decree 883 that forced a series of measures such as removal of subsidies for gasoline and diesel fuels deregulating their price, which caused a price increase of 20 percent up to more than 100 percent. Other costs were in turn affected together with everything that relies on transportation like food. Additional aspects of the decree included the elimination of import duties and the lay-off of thousands of public employees. This was viewed as part of a set of austerity measures imposed on the country by the IMF, which Ecuadoreans referred to as “paquetazo” (big package). In exchange, the Moreno government was to receive more than $4 billion from the IMF at the same time that it exonerated corporations from paying a similar amount in overdue taxation.

The reaction has been immediate led by thousands of indigenous people from all provinces of Ecuador represented, among other groups, by the Confederación de Nacionalidades Indígenas del Ecuador, CONAIE (Confederation of Indigenous Nationalities of Ecuador). This is important to emphasize because there has been an obvious attempt to discredit this genuine movement suggesting that Rafael Correa was behind it with the intention of triggering a coup. CONAIE made it a point to distance themselves from Correa.

Support for Moreno came promptly and more directly from US Secretary of State Mike Pompeo and a group of former Latin American presidents who issued a declaration denouncing “foreign-induced acts of people’s violence” naming specifically Venezuela’s “dictatorship” and its “ally” the FARC. All in the attempt to politicize a genuine popular reaction and, in so doing, defend the sole culprits, the Lenin Moreno administration plus the IMF.

Lenin Moreno won the presidential elections of 2017 for the centre-left PAIS Alliance Party. He was Correa’s vice president and was considered the natural choice for the continuation of what was mostly a progressive government with a considerable support by Ecuadoreans.

However, after he became president Lenin Moreno soon started showing signs of straying from the previous administration, which was seen by many as a betrayal of everything he was elected for. It is not clear if his was a planned deceit or if there were any contributing circumstances including political pressure. But his quick turn around that initially came as a surprise, showed an aggressive motive with accusations of corruption of former president Rafael Correa. He appointed several judges in the judiciary that would have ensured a prosecution. Consequently, Correa opted to leave the country becoming an opposition voice against his former vice president. Moreno’s appointments would also guarantee that he could not be prosecuted since after all he was part of the Correa administration for ten years. He soon established close ties with Washington that included purchases of military equipment and granting rights to “U.S. anti-drug overflights to land in the environmentally sensitive Galapagos Islands.”

The deal reached last October 13 between Lenin Moreno’s government and leaders of the indigenous people, represented by CONAIE’s president Jaime Vargas, was mediated by the UN and the Catholic church. Decree 883 was revoked and a commission to include indigenous reps will write a new proposal to replace it. This was quite a change of position from the embattled Moreno of a few days prior who had emphatically announced that he would not withdraw the decree. But the deepest moral divide was noted when Moreno shockingly stated in an interview: “with all respect for human life, but I believe that the dignity of a state is much more than that.” The lack of sensitivity for indigenous people’s dignity was not ignored by the protesters who stated that the lost lives would rest on his conscience.

Street celebrations followed the announcement of the deal that was seen as a major victory not only for indigenous people but also for all Ecuadoreans. It was certainly a victory for peace. But this needs to be a cautious celebration. Has trust been restored? Can Ecuadoreans rely on a government that betrayed them since the elections of 2017? Only time will tell.