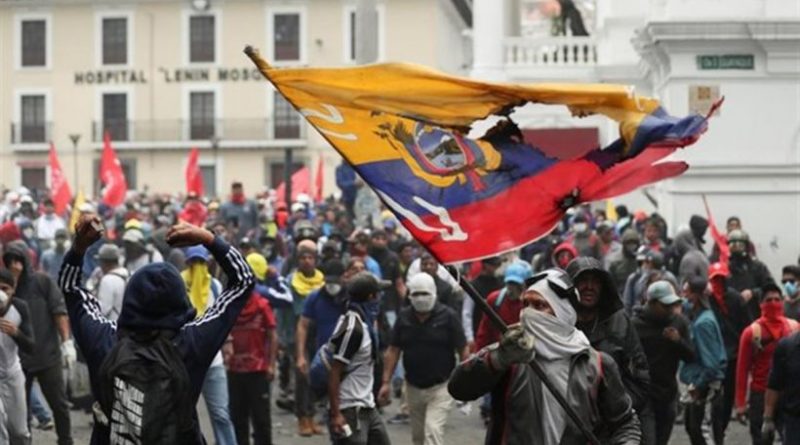 After six days of protest, on October 7, the government of Lenín Moreno moved the Ecuadorian capital from Quito to Guayaquil, declaring a state of emergency throughout the country.

The measure, one day after the national strike, tended to protect the key institutions of the State, such as the executive branch, to avoid a technical closure that resulted in the demolition of the government, as happened in similar events in the history of Ecuador.

That same day, Moreno accused President Nicolas Maduro of being behind the activation, with Rafael Correa, of a plan to destabilize his government, as his Security Minister, María Paula Romo, had said at the beginning of the national strike. In anticipation of the official decision, the Ecuadorian journalist Andersson Boscán, one of the directors of the “La Posta” outlet, with a strong anti-Correa tendency, on October 7 made a complaint against the intelligence agencies of Ecuador for not having noticed the “arrival of Cuban and Venezuelan intelligence agents for destabilizing purposes.”

The distribution of this opinion trend was completed on October 8 at 10:52 in the morning, when the journalist Casto Ocando, resident in Miami, leaked that former President Correa organized the “operation” from Venezuela.

A few hours later, Correa posted a video from his apartment on the outskirts of Brussels, Belgium, completely denying this claim. That same day, Assemblyman Yofre Poma, the first leader close to Correa arrested, was brought to court for allegedly paralyzing the operation of the Trans-Ecuadorian Pipeline.

The accusation, made by the Prosecutor’s Office, was a day before Minister Romo accused the governor of Pichincha, Paola Pabón, of wanting to cause “terror and chaos” in the country. The word “terror”, as the days go by, would be repeated over and over again by government spokespersons. From this moment on, there was a clear point of acceleration in public and communication spokespersons where the protest was divided between the “legitimate” one, carried out by the indigenous movement, and the violent destabilizing one, carried out by “infiltrated Correistic elements, financed by Venezuela”.

One of the central elements of this argument rested on October 8 in the complaint of the Comptroller of the republic, Pablo Celi, against “organized groups that attacked the headquarters of the agency in order to destroy documents that support criminal responsibilities in ongoing investigations. ” According to Celi’s opinion, these types of actions showed that in the country there was “a conspiracy process in place to subvert the democratic order.”

Quickly the complaint of this official, appointed by Moreno, was used to accuse Correa’s followers of “destroying evidence of corruption against him.”

Another of the central elements, to gain even more weight on the “supported” conspiracy dossier against Venezuela and Cuba, was the arrest of 17 Venezuelan Uber drivers outside the Quito airport.

According to Andersson Boscán and his suspicious clairvoyance, the detainees had the route of the vice president in their possession and would have been posing as Uber drivers to carry out an attack against the second in command in Ecuador. A day later, 15 of them were totally cleared because there was no evidence against them. All this climate of opinion, without a doubt, solidified on Saturday, October 12, when it was known in advance that the Moreno government would apply a curfew in Quito within the framework of a call for dialogue, according to the journalist from La Posta, Juan Eduardo Vivanco. Who, in addition, denounced that Quito was “under a plan orchestrated by mafias to take control of the State.”

The former president of the Confederation of Indigenous Nationalities of Ecuador (CONAIE), Salvador Quispe, collaborated in this thesis by affirming that Saturday that “Correísmo had taken control of the mobilization” to prevent the indigenous from negotiating with the government. This advance to the facts resulted in, once the beginning of a negotiation between the government and the indigenous movement was announced, a curfe being finally ordered in Quito.

Immediately, the protesters left on the street in this context were blamed for a new fire at the Comptroller’s Office and an attack on the private channel Teleamazonas, owned by the Ecuadorian banker Fidel Egas.

Both actions were considered “terrorist acts” and were attributed to violent mobs of “Correismo.” Teleamazonas, on the other hand, like the rest of the private media, rated the cacerolazo against Lenín Moreno as one carried out by the citizens of Quito in favor of “peace” in Ecuador (and hence the curfew).

On the other hand, once the state of exception was applied, the indigenous movement took refuge in the House of Culture in Quito, where it was repeatedly repressed, while the former president of the National Assembly, Gabriela Rivadeneira, took asylum in the embassy of Mexico before the danger of being arrested under the accusation of terrorism and instigation of the rebellion, as a day later would happen to the former mayor of Durán, Alexandra Arce.

In this context, the dialogue on Sunday 13 began with a statement by CONAIE President Jaime Vargas, recommending an investigation on visible politicians linked to Correa for the violence recorded in recent days.

Colombian media such as RCN reviewed, along the same lines, alleged guerrilla tactics used by protesters, and the existence of shields bought by the Ecuadorian former president to generate violence in the streets of Quito. On Monday, October 14, under these arguments, the governor of Pichincha, Paola Pabón, and one of her collaborators, both accused of participating in a “destabilization plan financed from abroad”, were arrested.

The same charges weighed against the secretary of the Citizen Revolution party, Virgilio Hernández, after his home and the headquarters of the party in Quito were raided. From the raids, the existence of shields, safes with money, protest material, and a sum of cash embedded in the mattress of a bed was taken as evidence of an insurrectionary plan.

Featured image: Ecuador, after the protests, lives a climate of repression against the followers of Correa (Photo: Misiones Online)