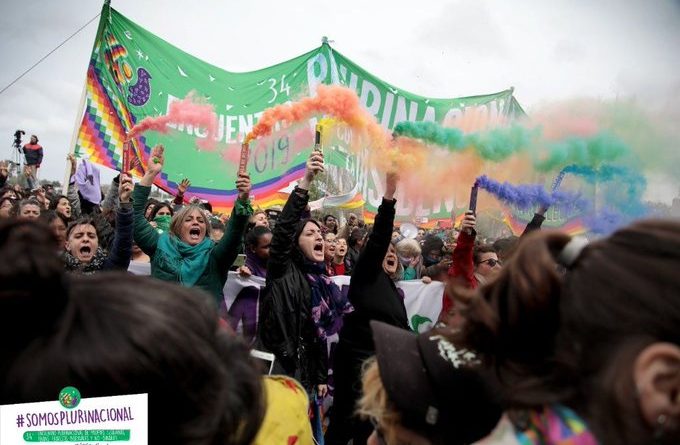 There was a delegation of Salvadorans who traveled to denounce the re-militarization of the territory and the persecution young and poor women by the criminal justice system. The next stop of feminism without borders will be in the Central American country. And we will meet there.

There is a connection that does not recognize borders but convictions to continue the struggle. Even in the most adverse conditions, feminisms grow from the foot and are organized around empathy and twinning causes. For the first time in an Encounter, a group of Salvadoran feminist activists participated, consolidating with their voices what migrants from that territory had already been doing within the movement in Argentina. The fact is that El Salvador was declared a “femicidal state” in the “Ni Una menos” stages of 2018 and 2019 and in the last 8M, “Global Women’s Strike”.

The delegation of Salvadoran feminists was made up of almost a dozen members of the Steering Committee of the XV Feminist Meeting of Latin America and the Caribbean (EFLAC), which will be based in El Salvador in November 2020. It was a participation that constituted a historic milestone in building a feminism that knows itself to be without borders.

After 26 years, the EFLAC returns to Central America and is a fundamental political fact to strengthen the feminist organization in the region in times of green tide. Therefore, those who traveled to # 34Encounter are those who are part of the logistics, content and communication commissions. All organized, members of the Citizen Group for the Decriminalization of Abortion, the ecofeminist movement, the Salvadoran Network of Human Rights Defenders, the Feminist Collective, the Association of Young Feminists and those that are part of the Network of Young Feminists.

El Salvador is one of the three countries in Central America that penalizes abortion absolutely, together with Honduras and Nicaragua, denying the right to health and life for women and people with the ability to gestate. This is what feminist activists say who came to La Plata have to announce: “the Central American reality is marked by re-militarization and state repression, the criminalization of Human Rights Defenders and activists, with states servile to racist policies and (Donald) Trump’s xenophobia,” and reported, “they persecute, stigmatize, criminalize and murder us for defending rights and even for decisions on our body-territory.”

Therefore, some of the activists
participated in the workshops related to the legalization of abortion; although they were also interested in those related to the history of the Encounters, to get to know the debates, positioning themselves next to the demand that it be “plurinational” and of and with “women, lesbians, transvestites, trans and non-binaries”.

Salvadorans participated with Marcela López, for the first time, at the Sunday table at noon in the Plaza San Martín, of “Feministas del Abya Yala”, communicating what happens in the Central American region; especially there and in Honduras, Nicaragua and Guatemala.

In El Salvador there are 16 women in jail due to laws that criminalize abortion, all poor, young and sometimes victims of sexual violence, all locked up after arriving at the hospital and sentenced to 40 years in prison. “Today we call on sorority and feminist solidarity with Evelyn Hernández, who since 2016 is persecuted by the Salvadoran State,” they said. “She did not have access to comprehensive education in sexuality, faced sexual violence and after an obstetric emergency, was sentenced to 30 years,” they said. The Attorney General’s Office, in an act of hatred against women, intends to condemn her again. “Let’s unite our feminist voice to demand justice for Evelyn,” they said, “we repudiate the prosecution as sexist and criminal. Live and free we love each other,” and they concluded, abortion must be law in all Latin America and the Caribbean.”

“Las bichas” marched in the “We are plurinational” campaign block, raising the demand of being feminists from a perspective that questions the logic of nation-states, without borders; since they understand that feminist solidarity and sorority are the main thing. And they came for that, to knit and weave themselves with all the Compas of the south. So that networks can be strong among us and in this particular case, demand justice for Evelyn.