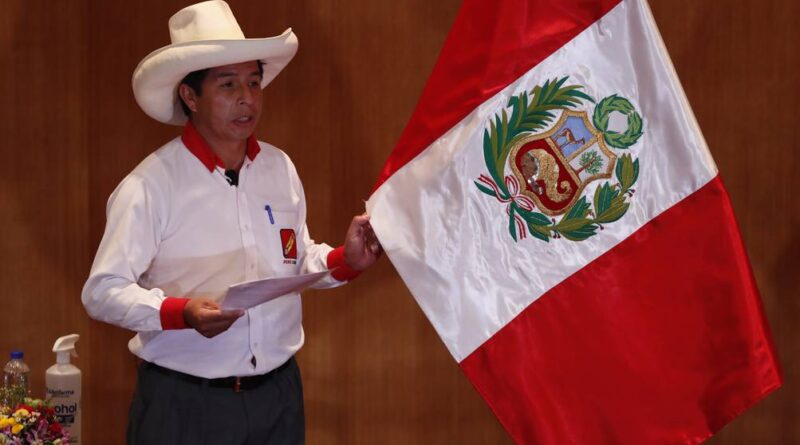 In what stands out as the second progressive wave of this century for Latin America, Peru of rural teacher Pedro Castillo, who assumed the presidency on the bicentennial of independence, promises to do its part. The long and complicated wait for the ratification of the result and the aggressiveness of the conservative forces that support fujimorismo show, however, that it will not be easy for him to implement his projects.

The oligarchy and the large multinational interests, represented by the elites of the urban areas, have formed a ring around the Fuerza Popular party. A party that is a bastion of the South American radical right, represented by Keiko Fujimori, daughter of the former Peruvian dictator who was in power from 1990 to 2000, and who obtained 49.87% of the votes in the second round of the presidential elections.

Primary school teacher Pedro Castillo, a trade unionist, at the head of a party such as Peru Libre, with his main reserve of votes in the rural areas of the country that are inhabited mainly by poor peasants, mestizos and indigenous people, obtained 50.2% of the votes. In Congress, that has been elected for the next 5 years, his party has only 37 seats out of 130, plus the 5 of Verónika Mendoza’s Juntos por el Perú.

Therefore, he does not have a majority that could allow him to easily implement the government’s program, summarized around the promise “no more poor people in a rich country,” and that of a National Constituent Assembly, which could repeal the 1993 Fujimori Constitution, drafting a Magna Carta “that has the color, smell and taste of the people.”

Since 2018, from the resignation of Pedro Pablo Kuczynski to the impeachment of Martín Vizcarra in 2020 and the resignation of his successor Manuel Merino de Lama to the compromise of Francisco Sagasti who led the country to elections, the large power groups that divided the country have settled their accounts through lawfare and institutional coups.

After thirty years of unbridled neoliberalism, 19% of the young people between 15 and 24 years of age in Peru neither study nor work, while the profits of the multinationals that exploit the resources of the world’s third largest producer of copper, zinc and tin and sixth largest producer of gold, have increased drastically. In a country that is among the most affected by the COVID-19 and which, according to the International Monetary Fund itself, had an increase of almost 2 million poor people, the people responded with struggle and then with the vote. And now, it has no intention of letting the imposition of artificial rules and institutions that close the doors to change.

A first tug of war with the oligarchy was seen after the appointments made by Castillo, starting with that of Prime Minister Guido Bellido. The right wing demonstrated violently in front of the president’s house, but the people ran to defend it. And, meanwhile, as in the most classic CIA script, implemented from the time of Allende to today’s Venezuela, came the price hike and the media attack on the new government: as if the merchants and the big economic groups were not fixing prices to increase their own profits…

The main issue that is stirring up fujimorismo is that of the “fight against terrorism”, given that some government officials are accused of sympathizing with former communist guerrillas of Sendero Luminoso, the militants of which organization have been in prison for thirty years. Sendero Luminoso’s top leader, nearly ninety-year-old Abimael Guzmán, is dying in prison after 29 years of solitary confinement and torture and was recently rushed to the hospital.

Another popular theme on the right is the fear of “communism,” translated to “Castro-Chavismo.” Many deputies took their oath in Congress raising their fist and declaring their position in favor of Latin American integration and a second independence.

Also, Peru Libre is a party that defines itself as “Marxist-Leninist-Mariateguist,” which is part of the São Paulo Forum, and its members and leaders have participated in the world congresses organized in Caracas in recent years. In foreign policy, it calls itself “internationalist and anti-imperialist,” and supports the revolutionary processes in Cuba, Venezuela, Nicaragua and Bolivia.

For this reason, the declarations of the Peruvian Foreign Minister, Héctor Béjar, regarding a change of attitude in favor of multilateralism and non-interference in the internal issues of other countries, and for the resumption of UNASUR, aroused great hope. Béjar, an 85 year-old former guerrilla who knew Che Guevara, also expressed his gratitude to the President of Mexico, Andrés Manuel López Obrador, for his speech criticizing Almagro’s role in the OAS, delivered before the foreign ministers of the Community of Latin American and Caribbean States (CELAC), where AMLO also condemned the US policy of “sanctions.”

As anticipated by the spokesperson of Peru Libre, Vladimir Cerrón, Peru may leave the Lima Group, as Mexico, Bolivia and Argentina, three nations to the left, have already done. However, the decision is not yet official, for, in Peru, the positions within the government alliance regarding the main objective for which the infamous Lima Group was founded—to undermine the legitimacy of Venezuelan institutions after the election of President Nicolás Maduro, are not unequivocal. Given the current internal balance and the weight of those pushing for a “social democratic path” in economy that may be accompanied by a moderate position also in foreign policy, it would be a great step forward if Peru were to follow the steps of Mexico and Argentina.

Meanwhile, Castillo has been recognized as head of the Armed Forces by the military high command, in front of whom he honored the women and men who won the country its independence. “I urge you to keep alive the mystique that has characterized the women and men who forged the history of our country to achieve a more inclusive and tolerant Peru,” he said at that event.

The President of the Council of Ministers, Guido Bellido, said, “For more than 200 years there has been an official Peru and an unofficial Peru; a Peru that has everything and another that has nothing; a Peru that is forgotten and discriminated against and another that had all the authority. We are not against anyone; we are here to support the 33 million Peruvians, so that everyone has better conditions and opportunities.”

Featured image: Pedro Castillo, president of Peru, has a difficult task ahead of him in implementing his government’s promises in a country taken to the brink by neoliberalism and the extreme right. Photo: EFE