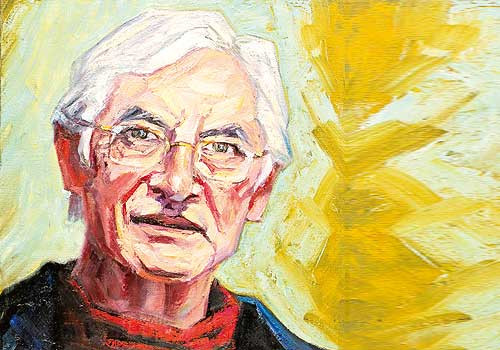 Héctor Béjar was born on September 2, 1935, in Ricardo Palma district, Huarochirí province, Lima department, in Peru. His father, Mariano Béjar Pacheco, was a musician and member of the American Popular Revolutionary Alliance (APRA) party who was not in total agreement with the party leadership. His mother, Zoila Rivera Rodríguez, was a teacher. She studied law at The National University of San Marcos (UNMSM) and was never a student leader there, but rather a press secretary at the Centro Federado de Letras.

From the age of 16 Béjar worked as a news anchor and presenter for national and international artists on Radio Central de Lima. With this half-time job, he was able to make a living and worked at the radio station until 1960.

In 1953 Béjar joined the Peruvian Communist Party (PCP), which back then was still a clandestine organization. Béjar was press secretary and member of its Central Provisional Committee from 1954 to 1959. In 1956 he founded Unidad, the PCP newspaper. His pseudonym in the party was Alayza. In 1956 he was arrested, for the first time, for organizing a celebration in honor of the iconic Peruvian communist, José Carlos Mariátegui. He was arrested a second time in May 1958, in the context of the mobilizations organized by the left to “welcome” the United States Vice President Richard Nixon to Peru. The Peruvian State responded by arresting dozens of people, including Béjar.

In 1959 he was expelled from the PCP, along with Juan Pablo Chang (who would be assassinated alongside Ernesto Che Guevara in October 1967). While they had been members of the party, Béjar and Chang had strong criticism of the party’s leadership and political course. Together with Chang, Guillermo Mercado León and Luis Zapata Bodero (the latter two died as “Javier Heraud” guerrilla members of the National Liberation Army (ELN) in December 1965), and others, Béjar formed the Leninist Committee of the Department of Lima. It had the objective of founding a communist party, since they did not consider the PCP as a true communist one. In the period that Béjar was part of the Committee, until 1961, its written publication was called Peru Popular.

In 1961 Béjar traveled to Cuba to train politically and militarily with the aim of organizing a guerrilla war in Peru. In September 1962, in Cuba, the ELN was founded. Béjar was one of its leaders. The organization grew out of the desire of young Peruvians to follow the example of the Cuban Revolution and was led through a collective leadership.

The ELN base was made up of a group of seven Peruvians who had traveled to Cuba at the end of 1961. Although it was a politically heterogeneous group, some of them were former members of the communist party. Subsequently, the group of seven was accompanied by other former members of the Moscow-oriented communist party, independent revolutionaries, and a group of around forty Peruvian students who had received scholarships to study in Cuba who, impressed by the Cuban Revolution, wanted to organize a guerrilla struggle in Peru.

The ELN went through three phases. Béjar actively participated in the first two. The first began from its foundation until its first defeat in May 1963 in the Peruvian city of Puerto Maldonado. Poet Javier Heraud died in that combat. The second phase of the ELN began with a restructuring process and an evaluation of the first guerrilla experience. In this phase, in September 1965, the ELN created the guerrilla front “Javier Heraud” in the department of Ayacucho, in La Mar province. This period ended in December 1965 with the defeat of the ELN and the death of almost all of its militants. There were only two survivors, one of them Héctor Béjar. Sick with Leishmaniasis and with a decimated guerrilla, Béjar returned to Lima on February 27, 1966, only to be arrested the next day in the home of economics professor Virgilio Roel.

In the guerrilla, Béjar’s pseudonym was Calixto. Although he did not command the ELN, he nonetheless was a guerrilla leader. The ELN did not use ranks; however, there was some form of military discipline in the organization. Béjar had the longest political career of all those who were part of the ELN guerrilla in the Ayacucho Department.

Béjar was not sentenced because there was no concrete evidence of his participation in the guerrillas. The peasants of Hacienda Chapi, one of the haciendas attacked by the guerrillas in September 25, 1965, where its two owners had died, did not identify him as one of the guerrillas.  The then government of Peru asked for a 17 year prison sentence, but Béjar was sent to jail without a sentence.

His first book, Peru 1965: Notes on a Guerrilla Experience, which won the Casa de las Américas Latin American Essay Prize in 1969, was the result of an extension of a field report he prepared, in 1965, for the ELN. This text was called The 1965 Report and was published in mimeograph by said organization. Béjar had expanded the initial report because Desirée Lieven, a Franco-Russian leader of a Peruvian political prisoners support committee in France, offered to publish Béjar’s analysis and experiences through the renowned Maspero publishing house. However, Hildebrando Pérez Grande, a member of the ELN, suggested that Béjar should compete for the essay prize at the Casa de las Américas.

In addition to the aforementioned book, Béjar published various works regarding the guerrilla experience, while he was still in prison. In 1967, the ELN itself published Revolution: Present and Future. This work is an explanatory synthesis of the objectives, precedents and main experiences of the 1965 guerrilla movement. A year later, the Chilean magazine Punto Final published the essay “The Lesson of Errors,” and in 1969 Cuba’s OCLAE magazine published “Ernesto Guevara and the Latin American Revolution” and “Two Continental Guerrilla Fighters,” the last an article on Che Guevara and Juan Pablo Chang.

On December 24, 1970, Béjar and other political prisoners who had been arrested in regard to the events of 1965 and the previous years were granted amnesties. His release was unconditional. Conversations with the military representatives of the government of Juan Velasco Alvarado (1968-1975), who had taken power after a military coup against President Fernando Beláunde on October 3, 1968, led Béjar to work in the “founding group” of the National Support System for Social Mobilization (SINAMOS). Béjar had contact with Jorge Fernández Maldonado and Leónidas Rodríguez Figueroa, as well as civilian Carlos Delgado Olivera, secretary of President Velasco, and with President Velasco himself.

The objective of SINAMOS was to work towards a transfer of power since the military had planned to withdraw. On withdrawing, they were not to hand over power to political parties, but to organize a kind of popular government with workers and peasants representation. The mission of SINAMOS was particularly to organize the peasants who had received land through the 1969 Agrarian Reform, and the workers belonging to the industrial communities who, together with the business sector, ran their companies.

Béjar was in charge of the General Directorate of Youth Organizations. This directorate grouped youth volunteers who helped organize the agrarian leagues, but they also had technical tasks. In addition, the Directorate developed revolutionary outreach activities among young people. Béjar worked at SINAMOS from 1971 until the fall of Velasco on August 29, 1975.

After his work at SINAMOS, Béjar collaborated for a few months as deputy editor of the newspaper El Comercio, which had been expropriated by the military government of Velasco. Béjar was invited by its director Helan Jaworski. In May 1976, when the correlation of forces in the government was definitely against Velasco, Béjar was fired. Since the new military government led by Francisco Morales Bermúdez thought Béjar would organize the guerrilla again, he was persecuted for a year and a warrant had been issued for his arrest.

In December 1976 his second book entitled The Revolution in the Trap was published. This work deals with the political processes of the 1968-1975 period.

In 1977, under Jaworski’s leadership, the Center for Development and Participation Studies (CEDEP) was founded. CEDEP’s mission was to maintain relations with the peasant beneficiaries of the agrarian reform and offer technical assistance to rural communities. Béjar joined CEDEP and had the task of developing liaisons with the agrarian leagues and with the peasant federations. He became director of the CEDEP in 1989 and continued until 2000.

In support of the National Association of Centers of Peru, Béjar participated in the organization of 13 National Conferences on Social Development (CONADES), which brought together Peruvian organizations working on social development during 1995 to 2007. Béjar was in charge of choosing the texts that would go into the Central Reports that proposed the social policies meant to overcome the poverty which affected a large part of the population. All this work influenced the National Agreement (2002) signed by former President Alejandro Toledo, which incorporated a set of social demands as public policies.

In 1994, after the approval of the 1993 constitution, Béjar joined the anti-Fujimori dictatorship opposition, through a Civic Committee led by Gustavo Mohme Llona, director of the newspaper La República, and participated in the organization of DEMOS, Movement for Democracy and Society, which coordinated and centralized this anti-dictatorial movement. All the effort to mobilize thousands of people culminated in Fujimori’s flight and Peru’s return to democracy.

Béjar worked at CEDEP until 2009. It was in this period that he published his third book, Social Policy, Social Justice (2001). Béjar left CEDEP because, on the one hand, there was no more funding for the type of projects that Béjar was proposing and, on the other, he started working as a professor. Socialismo y Participación was discontinued due to a lack of funding. The last issue (107) was published in October 2009.

After the fall of the Fujimori dictatorship in 2000, Béjar returned to organized left politics. For a time, he was the coordinator of a movement that aimed to unite the left in Peru. Later, some of these organizations created the platform Frente Amplio that participated in the 2016 parliamentary elections. These elections marked the return of the left in an organized movement, after a 20 year absence in the Peruvian Congress.

During the 2009-2020 period, Béjar devoted himself to teaching, and writing academic books such as Myths and Millennium Goals: Poverty According to the Sophists (2010), Myth and Utopia: An Alternative Account of the Republican Origins of Peru (2012), Return to the Guerrilla (2016) and Old Chronicles and Bad Government. History of Peru for the Discontented (2019). Since 2005, Béjar has been an honorary member of the School of Sociologists of Peru.

Héctor Béjar is still a communist. Apart from his dedication to teaching and academic research, he is a political analyst who lectures on political issues in Peru and Latin America, and who writes articles and gives presentations at events related to the guerrillas of the 1960s and the Velasco government.