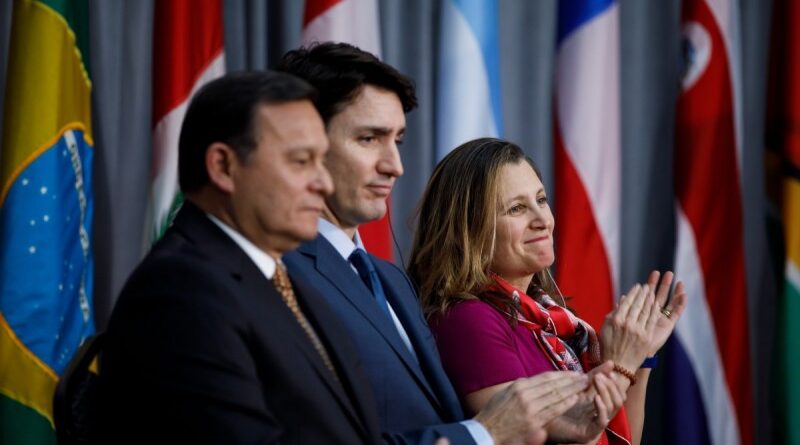 The Lima Group, a multilateral body formed in the Peruvian capital in 2017 with the goal of instigating regime change in Venezuela through a “peaceful and negotiated solution,” has been dealt a likely fatal blow that ought to elicit serious discussion about Canadian foreign policy in Latin America. Just don’t expect the media or politicians to even mention it.

In what could be a death knell to a coalition including Brazil, Canada, Chile, Colombia and Peru (along with several other smaller Latin American nations), Peru’s newly appointed Minister of Foreign Affairs, Héctor Béjar, called the Lima Group the “most disastrous thing we have done in international politics in the history of Perú.”

Prior to Baptiste and Béjar’s statements, the Lima Group had lost members and its support for Venezuelan opposition leader Juan Guaidó’s bid to declare himself president had failed. Considering its name, the Peruvian government’s abrupt turn against the Lima Group may mark the end of the regional alliance. In the words of Peruvian Congressman Guillermo Bermejo Rojas, “the Lima Group has been left without Lima. The Peruvian Foreign Ministry will never again be the table for parties of imperialism.”

The Lima Group has been left without Lima pic.twitter.com/ni1mvOIz3H

The Lima Group’s demise would be a major blow to the Trudeau government’s foreign policy agenda. The regional bloc was formed in August 2017 during the run-up to Venezuela’s May 2018 presidential election, and former Minister of Foreign Affairs Chrystia Freeland was a leading figurein its founding—described as an “embarrassing” decision by Halifax-based professors Stephen Kimber and John Kirk.

Amidst discussions between the foreign ministers of Canada and Peru in Spring 2017, Prime Minister Justin Trudeau called his Peruvian counterpart, Pedro Pablo Kuczynski, to “stress the need for dialogue and respect for the democratic rights of Venezuelan citizens, as enshrined in the charter of the Organization of American States and the Inter-American Democratic Charter.” But the Lima Group was established in August 2017 as a structure outside of the OAS, largely because that organization’s members refused to back Washington and Ottawa’s bid to interfere in Venezuelan affairs, which they believed defied the OAS charter.

Canada has been among the most active members of the coalition. Freeland participated in a half-dozen Lima Group meetings and its second official gathering was held on Canadian soil in Toronto. That October 2017 meeting urged regional governments to take steps to “further isolate” Venezuela.

At the second Lima Group meeting in Canada, a few weeks after Guaidó proclaimed himself president, Trudeau announced that “the international community must immediately unite behind the interim president.” The final declaration of the February 2019 meeting called on Venezuela’s armed forces “to demonstrate their loyalty to the interim president,” an implicit suggestion to remove the elected president.

Freeland repeatedly prodded Caribbean and Central American countries (including some of the worst human rights abusers in the hemisphere) to join the Lima Group and its anti-Venezuela initiatives. In May 2019 Trudeau called Cuban president Miguel Díaz-Canel to pressure him to join Ottawa’s effort to oust President Nicolás Maduro. The release noted, “the Prime Minister, on behalf of the Lima Group, underscored the desire to see free and fair elections and the constitution upheld in Venezuela.”

In a sign of the importance Canadian diplomats placed on the Lima Group, the Professional Association of Foreign Service Officers gave Patricia Atkinson, head of the Venezuela Task Force at Global Affairs Canada, its Foreign Service Officers award in June 2019. In a press release announcing the accolade, Atkinson was praised for supporting “the Minister’s engagement and play[ing] key roles in the substance and organization of 11 meetings of the 13 country Lima group which coordinates action on Venezuela.”

Activists have protested against the Lima Group since its first meeting in Toronto. There were also demonstrations held at the second Lima Group meeting in Canada, which included a disruption of the final press conference. At a talk last year, NDP MP Matthew Green suggested “we ought not be a part of a pseudo-imperialist group like the Lima Group” while a resolution submitted (though never discussed) to the New Democrat’s convention in April called on Canada to leave the reactionary alliance.

Hopefully the bold decisions taken by the Peruvian and Saint Lucian governments will mark the end of the Lima Group. But Canadians of conscience should seek to ensure it doesn’t disappear quietly. We need a broader discussion of how Canada became a central player in this interventionist bloc, and seek a new direction for Canadian foreign policy in Latin America and around the world.