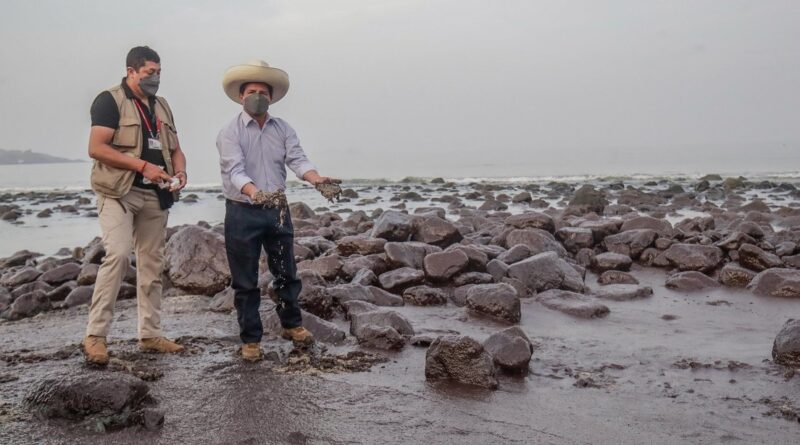 February 1, 2022 (OrinocoTribune.com)—On Monday, January 31, in response to the company’s inaction after a spill of over 10,000 barrels of oil, Peru’s Minister of the Environment Ruben Ramirez said the government will temporarily suspend Repsol’s offshore operations.

In addition, a judge barred four Repsol executives from leaving the country as the administration moves to investigate the details of the oil spill. The executives include Repsol’s Director in Peru, Jaime Fernandez-Cuesta.

Ramirez ordered a “halt to all of Repsol’s operations loading and unloading oil in Peruvian waters, until it provides technical guarantees that no more spills will occur. Furthermore, it has not shown clear evidence of cleaning up the spill,” reported Peru’s Ministry of the Environment.

Outrage in Peru
Following the spill on January 15, demonstrations took place in front of the Spanish Embassy and Repsol’s offices in Lima, and at Repsol’s La Pampilla refinery. On January 22, thousands of fishermen demonstrated in the Ancón municipality, shown in the tweet below. Damage to the marine ecosystem will prevent them from practicing their livelihood.

On January 24, Peru’s President Pedro Castillo promised that he would take measures to bring Repsol to justice, and condemned mainstream media’s silence on the ecological disaster.

“If this contamination were from the government, we would be in the pages [of newspapers] every day, on the screens, but since it is the responsibility of these companies that are on the other side [i.e.the right wing], there is an absolute silence,” said Castillo at that time.

During Castillo’s electoral campaign he promised to confront extractive industries, curbing the ecological damages wrought by their operations and ensuring that a greater share of their profits would benefit Peruvians, earning him strong support among Peru’s rural population.

Ecological catastrophe
The spill polluted 1.7 million square meters of soil and 1.2 million square meters of ocean, covering 21 beaches in four municipalities on Peru’s Pacific coast with tar, and killed an inestimable number of marine organisms. “Hundreds of dead fish, seals, and birds have washed up on the shore covered in oil,” reported People’s Dispatch.

Peru is no stranger to ecological disaster. Extractive industries have destroyed large swaths of the Amazon rainforest, now dotted with mercury-filled tailing ponds from gold mining. Studies have found levels of mercury in Indigenous peoples’ blood that is over five times the acceptable limit.

In June 2021, a study revealed concerning levels of lead in the blood of Peruvians belonging to Indigenous communities in the northern Amazon, reported Tierra Viva news agency. Researchers recounted finding high levels of heavy metals in fish and other foods, and in the local water supply, due to petroleum industry byproducts.

Peruvian oil giant
Repsol claims to account for 40% of Peru’s domestic fuel demand. Now that its operations have been halted, the company insisted that it is willing to cooperate with the government and the cleanup operation.

Repsol SA is headquartered in Madrid, Spain, and was ranked as the 683rd largest publicly traded company in the world in 2021, according to the Forbes global report. Repsol also owns substantial operations in Argentina and Brazil’s petroleum industries, and operates Peru’s largest oil refinery, in La Pampilla.

After Peru’s government intervened in the disaster, it was revealed that twice as many barrels of oil had spilled as Repsol had originally reported.

Last week, Peru’s Agency for Environmental Assessment and Enforcement (OEFA) stated that Repsol did not comply with the deadline for the identification of affected areas.

According to Peru’s laws, conviction for the crime of damaging the environment could lead to a prison term of between four and six years, Prosecutor Tamara Gonzales said.