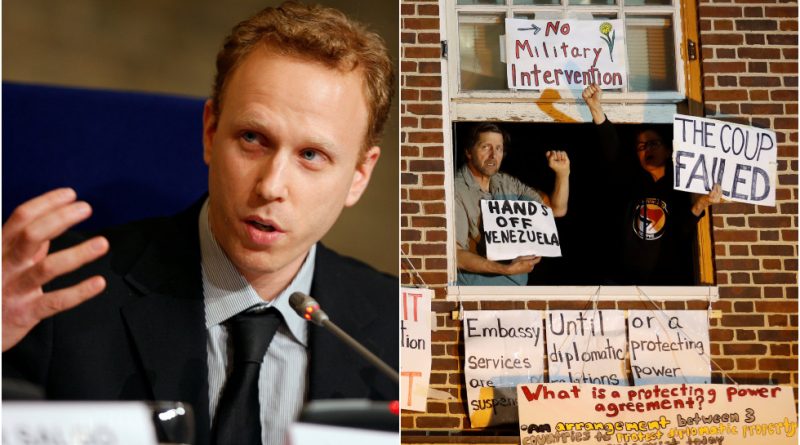 Max Blumenthal was arrested in what he called a politically motivated attempt to silence investigative journalism on a fabricated assault charge linked to his coverage of Venezuelan embassy siege by US-backed opposition activists.

In what he described as a SWAT-style raid, a group of DC police officers arrived at Blumenthal’s home around 9am last Friday. The investigative journalist was hauled off to DC’s Central Jail, where he spent two days in a cell, and was denied requests to call a lawyer.

The federal government essentially enlisted the DC police to SWAT me, ensuring that I would be subjected to an early morning raid and then languish in prison for days without even the ability to call an attorney.

The police eventually told Blumenthal he had been accused of assault, stemming from a months-old standoff at the Venezuelan Embassy in Washington, DC, back in May. Following the US-backed coup attempt and the expulsion of Venezuelan diplomats, supporters of President Nicolas Maduro occupied the embassy building – while the crowd backing the self-proclaimed ‘interim’ leader Juan Guaido besieged the premises for several weeks. The pro-Maduro activists were eventually removed from the embassy by force in a US police raid.

I was arrested on Friday on a COMPLETELY FALSE charge manufactured by the Venezuelan opposition related to their siege of the embassy in DC. I spent 2 days in jail, was shackled for extended periods & was denied my right to call a lawyer. Here’s the facts: https://t.co/2Nco0OzQ7P

Blumenthal was one of the few journalists closely following the standoff and sporadic clashes, and insists the assault allegation is totally fabricated to smear him and intimidate independent journalists. “I was not party to any violent actions around the Venezuelan Embassy,” the Grayzone editor said, dismissing the claim as a “malicious lie.”

“The opposition members who made up these lies about Max and I know they’re lying, and they are obviously using the government and police as tools to get revenge,” said the brother of the Grayzone contributor Alex Rubinstein, Ben. Back then, he was also briefly arrested on phony charges after participating in an attempt to deliver food and sanitary supplies to besieged activists.

This what authoritarian regimes do—and the US government is doing it here at home, to persecute and silence a journalist for his factual reporting on the crimes of Venezuelan coup-mongers it supportshttps://t.co/KGMwoq6BMu pic.twitter.com/qrsnDMzxQg

It remains unclear why the arrest warrant against Blumenthal was brought back to life so many months later, especially since the request for the warrant had initially been rejected, according to an individual familiar with the case. Blumenthal suggested it is “part of a campaign of political persecution designed to silence me and the The Grayzone for our factual journalism.”