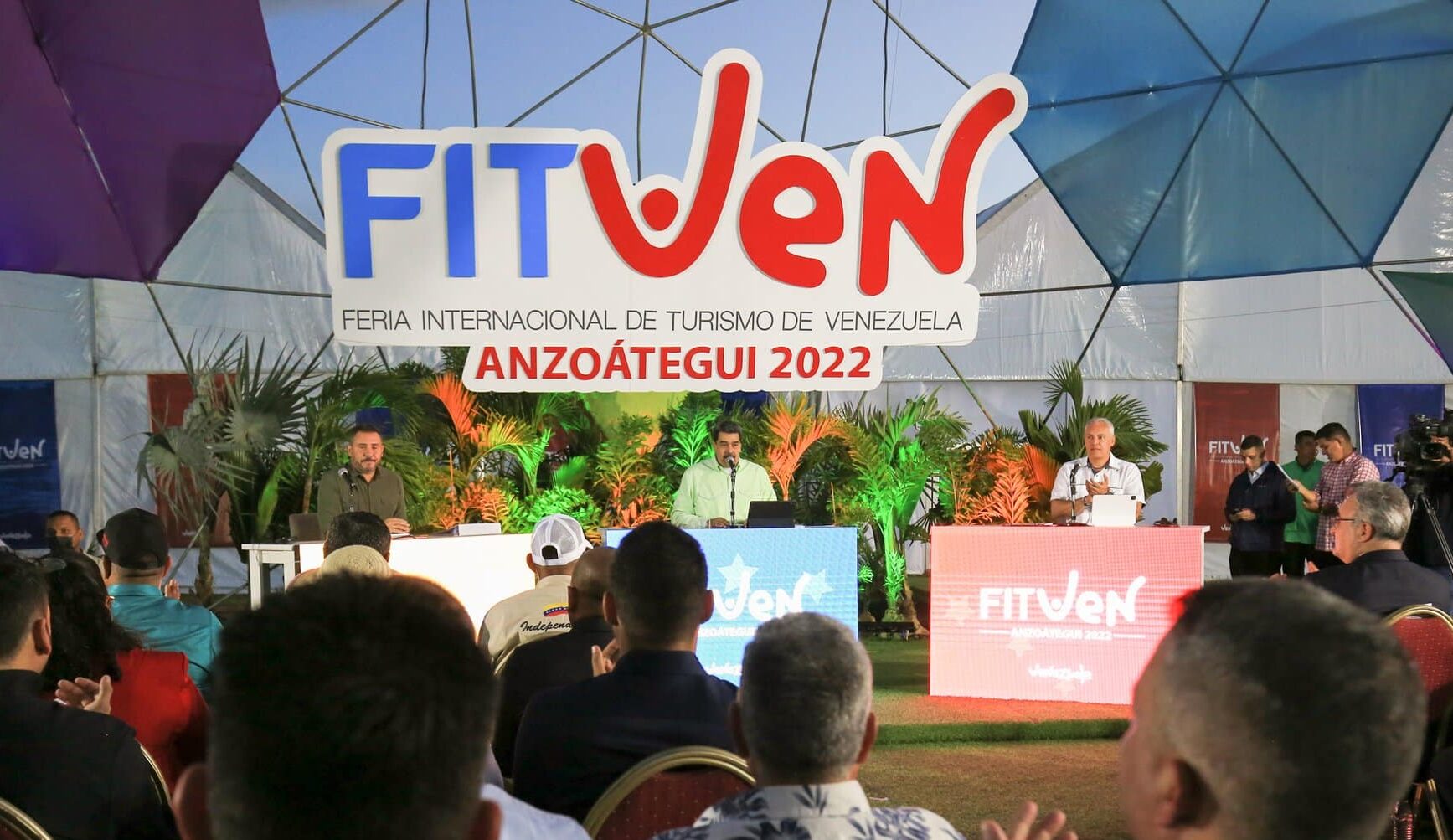 At the closing ceremony of FitVen earlier today, the Venezuelan President Nicolás Maduro announced the availability of additional funding for the execution of tourism projects.

After speaking with the head of the economy, Delcy Rodríguez, it was decided “within the economic growth plan … to revive in a special plan the banking investment portfolio for tourism,” said President Maduro. FitVen 2022, the International Tourism Fair of Venezuela, has been held since November 26 in Anzoátegui state.

The president announced that the plan includes “credits in international currency, in dollars, from private and public banks,” and mentioned the need to “increase the credit portfolio in all currencies.”

President Maduro said that it was not an exaggeration to say that Venezuela is one of the most beautiful countries in the world: “I love Venezuela more and more. The more I see it, the more I recognize it in its growth, in its rebirth, I really love it, more and more. And the greatest strength that the human being has is love.”

New economy detached from oil
President Maduro pointed out how, despite the unilateral coercive measures against Venezuela, the country is experiencing the growth of a new economy that will never depend on oil again, with new elements and new engines.

“Venezuela is one of the most beautiful countries in the world, as are its people, who know how to resist and contribute,” the head of state added. “The future that is coming to Venezuela is beautiful, and we have to continue insisting on building a new economy that is not dependent on oil.”

“We are moving towards an economy that produces food, quality services, and wealth that allow us to invest in our country,” said President Maduro. During his address, he advocated for an economy “that functions as a new and virtuous circuit of goods, services and wealth creation,” an economy which constantly regenerates itself with reinvestment.

President Maduro remarked that tourism is a great driver for economic growth, and referred to the tourism fair as “the best that has been carried out in the country.”

“In this state, the growth that the country is experiencing, its economic recovery, can be seen,” said President Maduro.

President Maduro invited the ambassadors and the rest of those present at the closing of FitVen 2022 to discover the beauties of Venezuela, he said about the unique landscapes of the Gran Sabana that visiting it “is like going to another planet right here on earth … it is another world; the tepuis nature” and he urged everyone to get to know “Canaima, Los Roques, Mochima, Morrocoy, among others, but also the cities,” and referred to recent statistics that indicate that after the pandemic tourism in cultural recreation areas grew 200% and gastronomy “and cultural and gastronomy tourism is the one that is rebounding,” he said.

He said that “it is not by chance that in Venezuela tremendous restaurants and tremendous shopping centers open in the cities every day.” He noted that Lechería, the municipality of Anzoátegui where FitVen 2022 was held, holds the record for the most gastronomy venues per capita in the country.

“Whatever you want to eat you can find here in Lechería, or in any city in the country,” President Maduro said.

PSUV on Mexico Talks: We Signed an Agreement With the UN, the Money is Going to the People and That is What Matters

The president stressed that, together with the national economic development plan that aims at independence from oil, Venezuela will continue to sell hydrocarbons to whoever wants to buy them at a fair price. “Dozens of gas projects are coming up and Venezuela is certified as the fourth greatest reserve of gas,” President Maduro said. “We are going ahead with petrochemicals… we are growing and we are going to be net exporters of petrochemical products, we are going to expand refining capacity, but the important thing is not to feel that oil solves everything for us… Let’s not commit the same mistake again.”

Release the money, they pay you back in full
With the announcements for the renewal of the credit portfolio for Tourism in Venezuela, President Maduro urged Vice President Delcy Rodríguez and the private banks to provide the credits, and explained that if the foreign currencies that enter the country are used for the recovery of hotels and other sectors of tourism, it is easily and quickly recovered by the financial, public, or private institution that lends to businessmen and tourism entrepreneurs.

“The level of delinquency in the payment of credits in Venezuela, in bolivars and in dollars, is almost zero,” President Maduro said. “That is another first-rate economic indicator.”

“People are receiving credits and paying because they are prospering economically,” added the head of state. He reiterated his announcement of the “reactivation, resuscitation, and expansion of a new tourism portfolio for investment and direct loans to entrepreneurs,” in bolivars and foreign currencies, including the dollar.

President Maduro pointed at Mare Mare Hotel, the venue for FitVen’s closing ceremonies, as an example of economic recovery and tourism reactivation. The hotel “was almost destroyed,” recalled President Maduro, and noted the extraordinary conditions in which it is today, receiving the fair’s exhibitors in a luxurious manner.

The minister said that tour operators from 15 countries, out of the 26 that participate in the fair, have plans to start operations in or to Venezuela. He highlighted the participation of “Azerbaijan, Senegal, Jordan, Poland, Turkey, Russia, Curaçao, Mexico, South Africa, Haiti, Vietnam, India, Belarus, Indonesia, Peru, Egypt, Syria, Malaysia, Sudan and others who joined during the business roundtable.”

National Tourism Award
President Maduro recalled that the national tourism award of Venezuela was created this year “to recognize the tremendous achievements of entrepreneurs and people who work in the tourism sector,” and he highlighted the country’s tour operators as very creative and passionate people.

The minister noted that 300 tourism operators and entrepreneurs applied for the 13 categories of the National Tourism Award of Venezuela, and referred to tourism as “oil that does not run out.”

President Maduro stressed that tourism in Venezuela aims to be ecological, healthy, and self-sustaining, “for happiness … for life.”