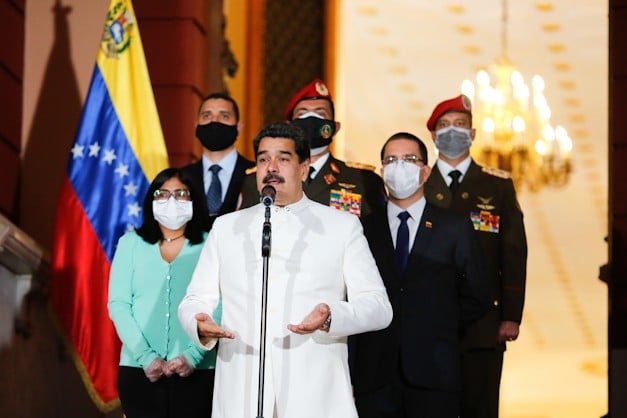 Venezuelan President Nicolás Maduro said Monday that justice will reach all people who, during this delicate phase in which the country and the world are fighting the Covid-19 coronavirus, have dedicated themselves to maintaining “miserable plans for putschist attacks” against the country, instead of joining the fight against the pandemic. “Will they keep working on their miserable plans for coup attacks? Do not complain later, because they usually cry on social networks when justice arrives. And justice will come. To all. I’m just saying today that justice is going to come: Operation Tun Tun to all terrorists, violent conspirators and plotters! Everyone!” he said Monday night in statements to the media at the Miraflores Palace, after meeting with the Russian ambassador, Mélik-Bagdasárov.

The head of state also referred briefly to Donald Trump’s comments on the possible coronavirus death toll in the US, preparing the US population for the worst catastrophe in US history. Early today the US president said: “If we have between 100,000 and 200,000 we’ve all together done a very good job,” during a press conference in the White House and after weeks of back and forth about the right containment measures to save the lives of US citizens.

RELATED CONTENT: Are the European Union and the UN Willing to Bypass the Blockade Against Venezuela?

In that sense President Maduro said: “can you say that a comment like that is human, is rational, for God’s sake, God forgive him because he doesn’t know what he is doing, this barbarian, this supremacist.”

Going back to irrational Venezuelan opposition, President Maduro said: “Justice will even come to you. When it touches you, don’t cry on social media!” without mentioning the recipient of his message, possibly referring to the opposition deputy, Juan Guaidó.

“Here we are not making faces, announcing lies and stupidities!” said President Maduro in another part of his statements, referring to the speech that Guaidó delivered on social networks on March 29, calling for an alleged “emergency government request” of $ 1.2 billion from international organizations. President Maduro added: “Here we are working with the seriousness that a pandemic deserves and with the love that our Venezuelan people deserve!”

Regarding the accusations made by the US government against President Maduro and several high-ranking Venezuelan officials, including the offer of several million dollars as a “reward” for his capture, Maduro said: ” There is a rejection even in the United States itself, for Donald Trump’s flamboyant attitude in putting a price on our heads, as if we were in the wild west of the 19th century. A price was put on the head of Pancho Villa. Morillo put a price on Bolívar’s head, too. And we are honest and authentic revolutionaries, and we are not intimidated by any aggression of the US government!”

He reiterated: “If they touch one of our hairs, the people already have a plans. The civic-military-police union already has the plans and the people gave it a name: the Bolivarian fury! That would be the national to international response to any *flamboyant and brutal action from the American Empire, and they know it. ”

RELATED CONTENT: Venezuelan Mercenary -Clíver Alcala- Turned Himself in and is on His Way to the Empire

He asked for serenity, trust and work for the Homeland, on three prioritized fronts: health, economic and food production, and internal security to guarantee peace.

A million tests
On the other hand, the President thanked China and Russia for the medical material and expert help provided to fight the coronavirus, and noted that there are already a million rapid tests for screenings. “With the arrival of all the tests, this week we are going to increase to Nth power the numbers of personalized extended screening.”

He pointed out that if containment and quarantine measures had not been taken two weeks ago, “the curve today would be more than 10,000 cases and 300 deaths.” He noted that 90 percent effectiveness has been achieved due to social distancing measures taken in time by the Venezuelan government, but that might not be enough. “The virus is out there, and we are in a dangerous stage. There could be a regrowth as a result of community infections. This week and the next one will be the weeks to cut the chains of contagion definitively,” he said.

He added that “life will not be the same when we go back to normal and monitored normality, until vaccines appear and the disease is cured.” The vaccine could take up to 18 months to develop according to the World Health Organization. It could be sooner. As one who is always optimistic, we ask God for sooner,” said Maduro.

The Venezuelan president recalled the case of the taxi driver who died in Antímano on Sunday morning. He pointed out that he had symptoms since February 29, but despite that, he continued working and was not seen in the state health centers, nor did he fill out the survey on the Patria System website, putting at risk the lives of many others.

“I want to ratify our admiration for all the staff of virologists, epidemiologists, doctors, bioanalysts, nurses in hospitals in the public system, in the private system. To all of you our applause, our admiration, our love, may the health workers of Venezuela live (…) To all the military personnel of the country, to all the police personnel, to all, to civil defense, to all the personnel of popular units, militiamen, all the street chiefs, all the communal councils,” added the Venezuelan president.

On the other hand, he thanked the support provided by Russia, China and Cuba, to best combat the pandemic, which already registers more than 700,000 cases worldwide.

Edited and translated by JRE/EF