Venezuelan President, Nicolás Maduro, presented this Tuesday to the National Constituent Assembly (ANC) the draft Constitutional Anti-Blockade Law for National Development and the Guarantee of the Rights of the Venezuelan People, in the face of threats of US military intervention and the intensification of the economic, financial and commercial  blockade imposed by the United States government. The activity was carried out in the Federal Legislative Palace, with the presence of the Executive and Ministerial Cabinet, as well as part of the diplomatic corps posted in Venezuela.

In statements broadcasted by Venezolana de Televisión, the Venezuelan head of state indicated that this bill will provide “the Venezuelan State with the institutional, legal and management tools to face and overcome the most perverse, widespread and brutal aggression that has ever occurred to our country in 200 years of republican life.”

During his speech, the Venezuelan President requested that this bill should be debated by the Venezuelan people to “give have them informed, create more awareness, but also to generate strength for the future and explain many things that have had to be done in silence,” due the nature of this unconventional war the South American country is facing.

He emphasized that the economic, financial and commercial blockade imposed by the US is part of a doctrine of the North American nation to promote a regime change in the country, which responds to its own interests. 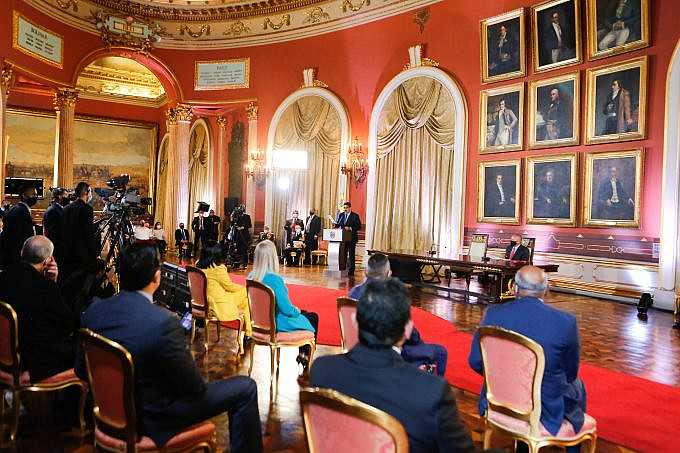 He quoted words from the US State Department : “The pressure campaign against Venezuela is working. The financial sanctions that we have imposed have forced Venezuela to default and we are seeing a total economic collapse in Venezuela. So our policy works. Our strategy works and we will stick with it”. Maduro pointed out that this declaration “is the confession of an international crime, an act of economic savagery to destroy a people, and it is the confession of a crime against humanity.”

He explained that the sanctions have been carried out in phases:

Maduro explains that the measures applied against Venezuela in the six-year period between 2014 and 2019, caused a 99% drop in foreign exchange earnings. “Out of every 100 dollars or euros that the country gained from the sale of oil in 2014, today it gains less than one dollar. We went from $ 56 billion to less than $ 400 million in 2019, ″ he explained.

The Venezuelan President stressed that thanks to the System of Missions and Great Missions and the conscience and resistance of the Venezuelan people, the consequences of the blockade have been avoided. He also affirmed that the fall in external income worsened in 2015, with the “theft” of Citgo Corporation in the United States.

He confirmed -for the first time- the assault on ships from Liberia, which were bringing 3 million barrels of gasoline to Venezuela, but were illegally expropriated by the government of Donald Trump and their merchandise was auctioned off in the foreign market, when it had been paid in full by Venezuela. However, he indicated that there is good news for Venezuela that will be announced this Wednesday.

Maduro called not to be deluded or deceived by the United States elections. “You have to be up and ready with what you have to do to defend Venezuela from the North American empire!” If Trump wins, we will confront him and defeat him! And if Biden wins, too!” But he also stressed that if any of them want to revise the policy against Venezuela and want to enter into a relationship of respect with the country, he is willing to receive them with open arms, ready for dialogue. “But let them see worthy men and women here!” He emphasized.

What is the law
In his speech, President Maduro asked for support to change the legal and institutional framework, in order to recover the economy and generate new conditions for the production of wealth, adapted to the economic imperialist war.

The anti-blockade law is a response of the State as a whole, which in a special and temporary legal framework, “will allow the State to protect our internal and external assets from the threat of confiscation, theft and looting by foreign governments and companies aligned with the blockade, for an efficient management of them.” 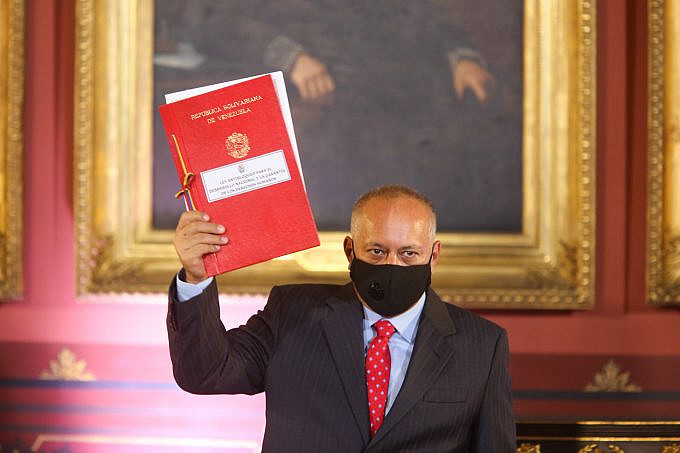 He indicated that the law seeks to strengthen public administration and improve the nation’s income. It will create rational and adequate incentives under flexible controls to stimulate internal economic activity and create external productive alliances that favor national development.

The law proposed by President Maduro aims at making alliances with productive sectors and companies inside and outside Venezuela, to develop economic sectors and businesses in strategic areas, such as hydrocarbons, agriculture, services, etc. National income will be improved by making the State’s shareholding more flexible in joint ventures, as well as managing State assets and liabilities in order to increase the nation’s income.

The law will reaffirm the validity of job stability for all workers and the full enjoyment of social rights. The new income obtained by the country will serve to strengthen the real income of workers, and the policies for the progressive recovery of wages, strengthen the network and social protection policies of the State and its priorities such as food and health.

The extraordinary income generated by the productive alliances will be invested on a mandatory basis in programs such as Clap, in protecting children, adolescents, mothers, vulnerable sectors, improving public services, water, electricity, gas, telecommunications, transportation, among others.

He pointed out that the anti- blockade law and its mechanisms will continue to be in force exceptionally while the blockade lasts or until the effects of sanctions and threats to the economy cease.

Diosdado Cabello: ANC declares regulatory urgency to approve it
For his part, the president of the National Constituent Assembly (ANC), Diosdado Cabello, affirmed that the «Anti-Blockade Bill is an alternative for the people to confront imperial aggressions, so the Plenipotentiary Power declared itself in regulatory emergency for the revision, information and approval of this bill in the shortest time.