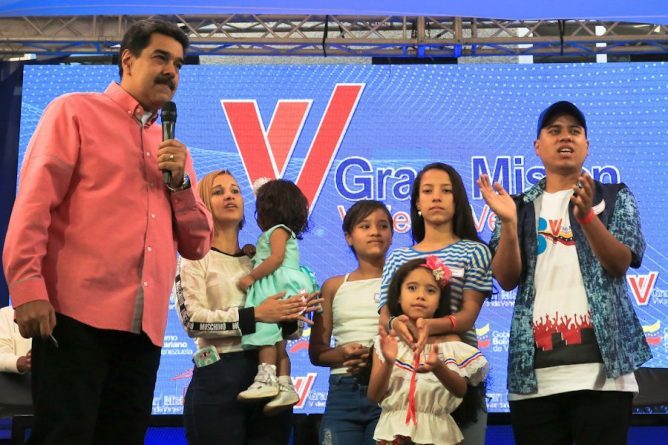 The president of Venezuela , Nicolás Maduro, rejected and repudiated on Thursday the illegal incursion committed by police officers of the United States ( USA ) into the the embassy headquarters of the South American country in Washington. “The USA has raided, has assaulted with commando groups, the precinct of the Embassy of Venezuela in Washington (…) a brutal action against international law and respect for embassies worldwide,” said the president.

In addition, he emphasized that the world is watching with astonishment and indignation the violent way in which the police officers entered the diplomatic headquarters, which marks a precedent in the violation of the Vienna Convention. “From the Bolivarian and Revolutionary Government, together with all the people of Venezuela, we reject and repudiate the assault on the embassy by the police groups of the Donald Trump Government.”

RELATED CONTENT: The Activists who Defended the Venezuelan Embassy, Won

The Head of State reported that he gave instructions to take a complaint for this occurrence to its ultimate consequences and expects the organs of the United Nations system to pronounce themselves against the act. “I have told our Chancellor, Jorge Arreaza, that we should take the complaint to its final consequences and that the UN System should rule sooner rather than later on this serious violation of the Venezuelan Embassy in the US,” he said.

Strengthen security at the US embassy in Caracas

On the other hand, the Venezuelan President ordered Venezuelan law enforcement agencies to reinforce the protection of the US Embassy in the capital, after the assault on the diplomatic headquarters of the Caribbean country in Washington. “In keeping with our strict vision of respect for international law as the basis of peace (…) I have ordered the reinforcement of surveillance and police and legal protection over the building of what was the United States Embassy, which belongs to the Government of the United States here in Caracas,” he said.

Without precedents
He stressed that the incursion of armed police into the embassy of his country sets a dangerous precedent for the immunity and security of diplomatic headquarters worldwide and noted that this is an unprecedented event. “The US governments have had enmity with countries, but had never assaulted an embassy, with armed men, commando groups, had never seen an act as embarrassing, criminal, brutal as he just committed today, May 16, the president Donald Trump,” said Maduro.

On the other hand, he indicated that he has identified the Venezuelans who were stationed on the premises of the embassy to applaud the action of the US police forces. “A small group of Venezuelan fascists (…) applauding the gringo police when they took these activists and took the embassy. They are all identified! We know who these fascists are who supported this!” he added.

The US police entered the Caracas embassy in Washington on May 16 to arrest a group of activists who were guarding the facility. The activists had been living at the headquarters since April 24 at the invitation of Venezuelan diplomats, in order to prevent sympathizers of opposition leader Juan Guaidó from taking control of the building. The Venezuelan leader described the arrest of the activists as a “brutal” act and called for the respect of their rights.

“We advocate for the human rights of these activists who were occupying legally by request of the Venezuelan Government, to protect and legally occupy our embassy, to protect it, to maintain it given that we broke relations with the Donald Trump Government,” he said.

Venezuela and the United States broke relations on January 24, after the president of that North American nation decided to recognize deputy Guaidó as president in charge of that Caribbean nation.