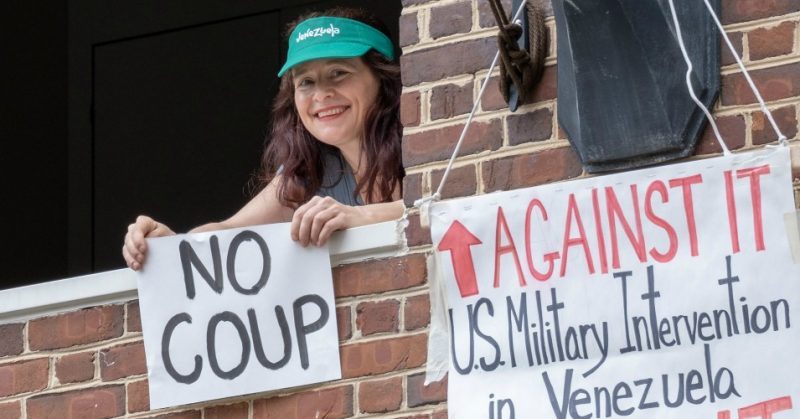 As an anthropologist who has researched and published on Honduras for over 20 years, I have witnessed and lived firsthand the devastating consequences of the US-based coup in that country. That coup, like the one that is being attempted in Venezuela, was plotted by a small group of wealthy elites with the principal aims of privatizing the public sector for their own financial gain, tightening their control over the thriving illegal drug trade, and deregulating and capturing for themselves and their foreign allies the profits of the lucrative extractive sector.

In plotting the Honduran coup and ensuring its success, those wealthy elites had powerful international allies in the US, Canadian and Israeli governments, military and private sectors, as well as throughout Latin America elite circles. Key figures in the 2002 attempted coup against Hugo Chavez in Venezuela, like Otto Reich and Robert Carmona, were deeply involved. So were powerful Washington allies like beltway operative Lanny Davis, who was immediately hired by the coup mongers to represent their interests on Capitol Hill. Similarly, the law firm Arnold & Porter has now been hired with money stolen from the Venezuelan government to advance the ongoing attempted coup against Venezuelan sovereignty.

Honduran and Venezuelan coup mongers are more at home in Miami than in their respective national capitals. As such, it’s no surprise that one of their favorite songs to sing outside the windows of the Venezuela Embassy, where they have been opposing the presence of the Embassy Protection Collective, is the US national anthem. They know they could never take power through free and fair elections; their true allegiance is to empire.

“If, by trying to protect the Venezuela embassy, I can help my government from leading the world into this nightmare scenario, it will be well worth the potential damage to my career.”

Also—as in the current attempted coup in Venezuela—Honduran coup supporters were characterized by their extreme misogyny, homophobia and racism. This hatred came out in their epithets and everyday language, but also had material, institutional and lethal consequences for women, the LGBT community and indigenous, black and Afro-indigenous communities throughout the country.

Combined with the aforementioned push towards privatization, the anti-intellectual and cultural fascistic tendencies of the Honduran coup regime have had an impact going well beyond the numbers. It has left an entire nation in trauma, with marginalized communities and communities of resistance disproportionately bearing the brunt of the extreme state repression necessary to maintain the deeply unpopular regime.

The murder of my friend Berta Caceres—the fierce anti-imperialist, anti-capitalist leader of the Civil Council of Grassroots and Indigenous Organizations in Honduras (COPINH)—was ordered by the powerful coup-mongering Apollo family because she so effectively led opposition to their ethnocidal development project. My friend Edwin Espinal had OAS protective measures issued (as did Berta) after being harassed, threatened and tortured by Honduran state forces for his leadership in organizing resistance to US imperialism and the neo-liberal fascist violence of the coup regime. Edwin has now spent 16 months in a maximum security, US-style prison for protesting the blatant theft of the 2017 election by Honduran Juan Orlando Hernandez, during a popular uprising in which dozens of protesters were shot dead by state security forces.

Like Berta and Edwin, there have been hundreds more cases of political assassination and imprisonment in Honduras since the coup. The vast increase in political violence there is a direct consequence of US intervention in support of the usurpation of electoral and other forms of democratic participation. Above and beyond the political violence used by the Honduran regime to maintain its power, the coup paved the way for immeasurable increases in everyday forms of violence. The destruction of the public health and education systems by the coup-installed neoliberal regime has left Hondurans without those options and while members of the resistance movement are murdered and jailed, organized criminals—from neighborhood gang members to the most powerful politicians in the nation—continue to enjoy impunity.

These conditions—all tracing back to the US-backed coup—are the immediate root cause of the great migration taking place right now. Honduran families are risking their lives to leave their homes, because staying is even more dangerous than making the journey to the United States, where they face family separation and imprisonment in border concentration camps.

Having spent nearly two years living in Honduras since the coup, and having served as a “country conditions expert” on over 50 asylum cases during that same period, I have seen the many ways that the US-based coup in Honduras has destroyed people’s lives. The Honduran people deserve better. So do the people of Venezuela.

As an academic, there are times when our standard tools of teaching, publishing and public speaking aren’t enough. There are times when we need to put our bodies on the line. For me, knowing what I know about the impact of US-supported coups, this is one of those times. A successful coup in Venezuela would have even broader consequences than those I have witnessed in Honduras. It would lead to civil war, and would most likely quickly escalate to a global conflict. If, by trying to protect the Venezuela embassy, I can help my government from leading the world into this nightmare scenario, it will be well worth the potential damage to my career. Please join me.