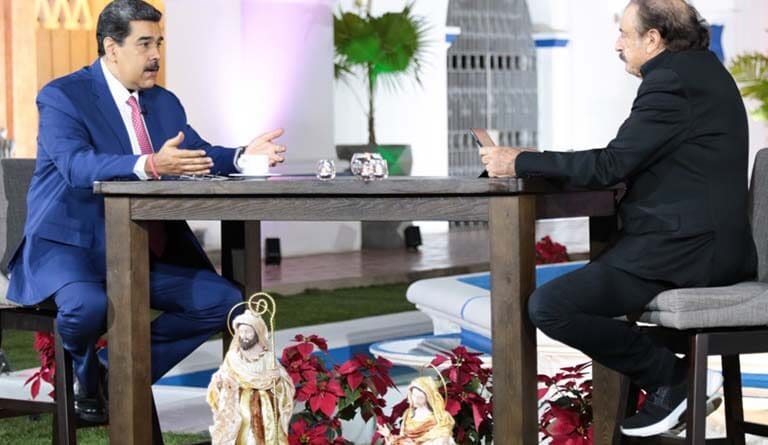 This Saturday, January 1, the President of Venezuela, Nicolás Maduro, said in an interview with the renowned Spanish journalist Ignacio Ramonet that the US caused a breakdown in the dialogue processes in Mexico.

In this regard, the president decried that the United States government, by kidnapping Venezuelan diplomat Alex Saab, sabotaged the dialogue between the government and the opposition that was being carried out in Mexico in spite of Washington’s opposition.

“The US stabbed the dialogue… the US had assured that it was not going to extract our diplomat Alex Saab,” President Maduro said.

The president further explained that the opposition coordinator, Gerardo Blyde, held talks with the US State Department and had given guarantees that the Venezuelan diplomat, Alex Saab, would not be extradited.

“They have Alex Saab kidnapped in a Florida jail, accusing him with thousand false documents, and Alex Saab continues to be one of the representatives of the Mexico Talks,” President Maduro said. “There has to be big changes for us to return to Mexico.”

However, President Maduro reiterated his call for political dialogue in the country: “I believe in dialogue, in understanding, I am against the calls that the opposition has made [asking the US] to invade us.”

“I have called for dialogue during the nearly nine years that I have been president, in all circumstances, with all oppositions, because I am a man of dialogue and peace,” President Maduro added.

The president explained that a bridge of understanding had been established with sectors of the extreme-right opposition: “The dialogues were going very well. We were already getting into the main issues, the re-institutionalization of Venezuela, the economy, the criminal sanctions, the life of the country and, once again, when there were already pre-agreements and we were going to announce good news for the country, the United States Department of State took an action that they knew would cause a breakdown of the dialogues.”

“I always say to my colleagues, leaders, heads of the Great Patriotic Pole (GPP), United Socialist Party of Venezuela (PSUV), and governors,” President Maduro recalled, “let’s not expect anything from anyone but from ourselves.”

RELATED CONTENT: Chuck Kaufman: A Great man has Left us

“Hopefully—who knows when and with whom—the possibilities of a direct, courageous, sincere and mutually understanding dialogue with the United States government will open,” he said. “If it happens, very good, and if it doesn’t happen, we will continue on our way.”

“These people—the extreme right—have shown their moral rot,” President Maduro said. “They put their claws like birds of prey into these companies—CITGO and Monómeros—into these assets, and they have stolen them and distributed them like loot.”

The Venezuelan president recalled that the United States government declared, more than a year ago, that it had given some $1.6 billion to the far-right group led by Juan Guaidó and Leopoldo López.

“That is $1.6 billion of US taxpayers’ money,” he stressed. “One day there will be justice, by good people who seek the truth. Where did they get the money, to whom did they give it, and how did they embezzle it?”