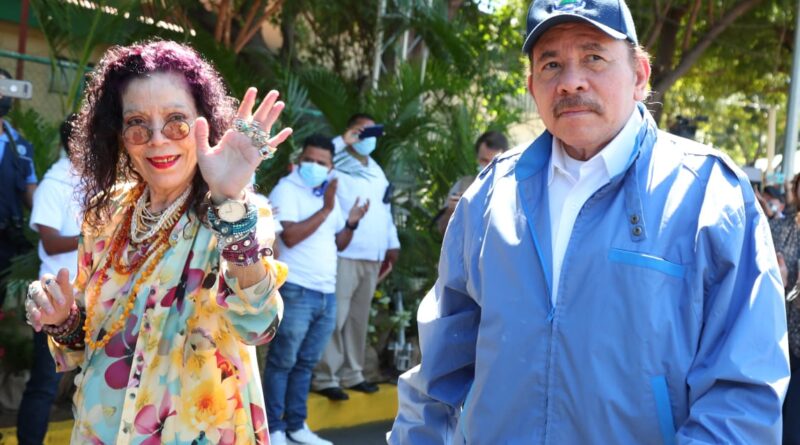 On Sunday, November 7, Nicaraguan President Daniel Ortega said that the general elections taking place in his country are a sign and a commitment by the vast majority of Nicaraguans to vote for peace and not for war or terrorism.

After voting in Managua, the president addressed the nation from the House of the Peoples, expressing that this election does not call for paralyzing the economy and destroying families. He stressed that the people want peace and well-being, while the right-wing sows hatred and terror and therefore opts for smear campaigns and violence, so that war returns to Nicaragua.

President Ortega pointed out that his country has the same right as the United States to defend itself against any act contrary to peace. He recalled that US authorities classified the violent assault on the Capitol on January 6 as a terrorist act, after which they detained more than 500 people involved in those violent acts, and they are being prosecuted.

He emphasized that those same authorities financed the violent coup attempt against the elected authorities of Nicaragua in April 2018, when representatives of the right promoted the murder of citizens to sow fear and generate rejection towards the authorities and the process of changes that the country promotes in peace.

Ortega added that from 1984 to this date, a total of 49 elections have been held in Nicaragua. He announced that more elections will be held in 2022 and 2023. In one of them, mayors, deputy mayors and councilors of 153 municipalities will be elected, and in another election, the councilors of the autonomous regions of the North Caribbean Coast and the South Caribbean Coast will be elected.

In addition, President Ortega mentioned the achievements of the country in the daily construction of its present and future for peace, such as the modernization of infrastructures, expansion of healthcare, the education system, agriculture and food sovereignty, and vaccination against COVID-19.

RELATED CONTENT: From Nicaraguan Revolutionaries to US Embassy Informants: How Washington Recruited Ex-Sandinistas Like Dora María Téllez and her MRS Party

Peaceful process
Bolivian news outlet Kawsachun News has been covering the elections in Nicaragua, along with other international news agencies. They have reported on Sunday that the elections may grant another big victory for the Sandinista Revolution, but the threat of US intervention is always present since the 1912 invasion by US Marines. Since then, US plutocracy considered Nicaragua a colony until the triumph of the Sandinista Revolution. Even now the US continues to hold on to the Monroe Doctrine, which considers all the territory south of the US border to be US colonial property.

Nicaragua's elections are today, polls indicate a big victory for the Sandinista Revolution.

However, the threat of foreign intervention hangs over the vote. The US govt invaded Nicaragua in 1912 and they've regarded it as their colony ever since. https://t.co/kJmVNnAWk4

A good turnout was reported by many Nicaraguans posting in social media platforms, most of them showing long lines of voters and informing about the presence of international observers and delegations.

Twitter user @DrSuazo915 reported about long lines of people waiting to vote in the early hours of Sunday at the Rafaela Herrera school in the town of Bonanza.

US imperialism activated
After a strong and sustained propaganda campaign using mainstream media, and despite all that the Nicaraguan elections being held peacefully, US authorities in Washington made public an interventionist statement on Sunday night, threatening Nicaraguans with more illegal economic sanctions and transmitting neocolonial hatred, because a country they consider its colony could dare to be  sovereign.

RELATED CONTENT: Why Black Revolutionaries Must Stand with the People of Nicaragua

U.S. escalates its war on Nicaragua, releasing a scheduled statement as polls come to a close in Nicaragua’s elections. Cynical words from the Biden regime. pic.twitter.com/7grUhViZbz

“Long unpopular and now without a democratic mandate, the Ortega and Murillo family now rule Nicaragua as autocrats, no different from the Somoza family that Ortega and the Sandinistas fought four decades ago,” is part of the statement where the racist and neocolonial US regime tries to label Nicaraguan democracy as an “authoritarian regime” in a way very much like the failed US led Guaidó “regime change” operation in Venezuela and the non-recognition of democratically elected President Maduro. In addition, arrogant US imperialism also dares to teach Nicaraguans history lessons about their own country.

Washington ends the grotesque statement in this way: “the United States, in close coordination with other members of the international community, will use all diplomatic and economic tools at our disposal to support the people of Nicaragua,” an euphemism really meaning that they might be already preparing plans to starve millions of Nicaraguan people in the same way they are trying to starve Cubans and Venezuelans.

President Maduro’s congratulations
Venezuelan president Nicolás Maduro congratulated the people of Nicaragua for their strong participation in a peaceful exercise of democracy.

By late evening on Sunday, international journalists on the ground in Nicaragua started reporting about the closing of voting centers and about the positive spirit of Sandinista forces after the closing of the polls. Around midnight, it was reported that electoral data had started to arrive at the counting headquarters of Nicaragua’s electoral authority.