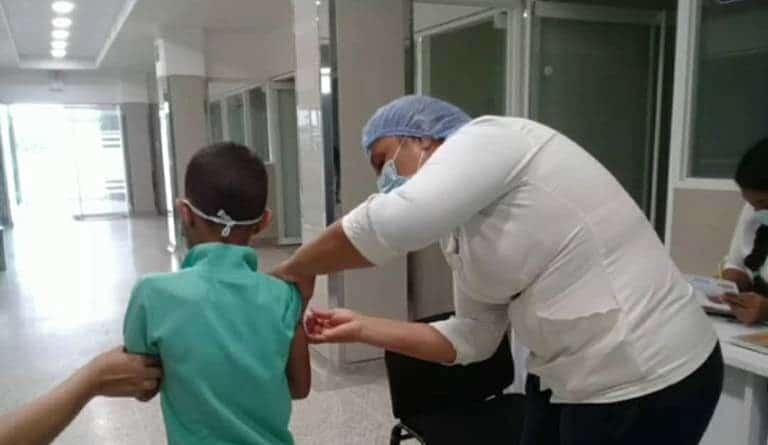 This Sunday, November 7, the President of Venezuela, Nicolás Maduro, announced the beginning of COVID-19 immunization for children two years of age and up, starting Monday, November 8.

“Tomorrow, Monday, in Venezuela, we are going to start vaccinating children two years of age and older,” said the Venezuelan president during a speech delivered from the Teresa Carreño Theater, where he presented prizes on behalf of the Rómulo Gallegos Centre for Latin American Studies.

RELATED CONTENT: Venezuela to Receive Another 2.5 Million Doses of COVID-19 Vaccines Through COVAX

He highlighted that in the last four weeks there has been a sustained decrease in daily infections.

“This is the lowest point in more than a year of pandemic,” President Maduro said. In Venezuela, the number of patients recovered each day day continues to exceed the number of new infections. “In this last week, we had an average of 890 new cases and 1,162 recovered per day,” he said.

The president reiterated his call to Venezuelans to get themselves vaccinated, and reported that as a result of the mass immunization being carried out in the country, a 55% reduction in moderate and severe cases was achieved, as well as a 50% reduction in the mortality rate.

New treatments
Maduro announced that in the coming days new treatments for COVID-19 will be arriving in the country, among which, he assured, is one that has demonstrated high effectiveness in reversing the infectious process in severe and moderate patients.

“I can’t say what it is, because the US empire will come and try to steal it,” President Maduro said. “When I have it in my hands I will show it, but I can only say that it is produced by one of the important drug manufacturers.”

Regarding vaccines, he indicated that 1.6 million Abdala vaccines are expected soon, to be added to the set of antigens that are already being applied in the South American country.