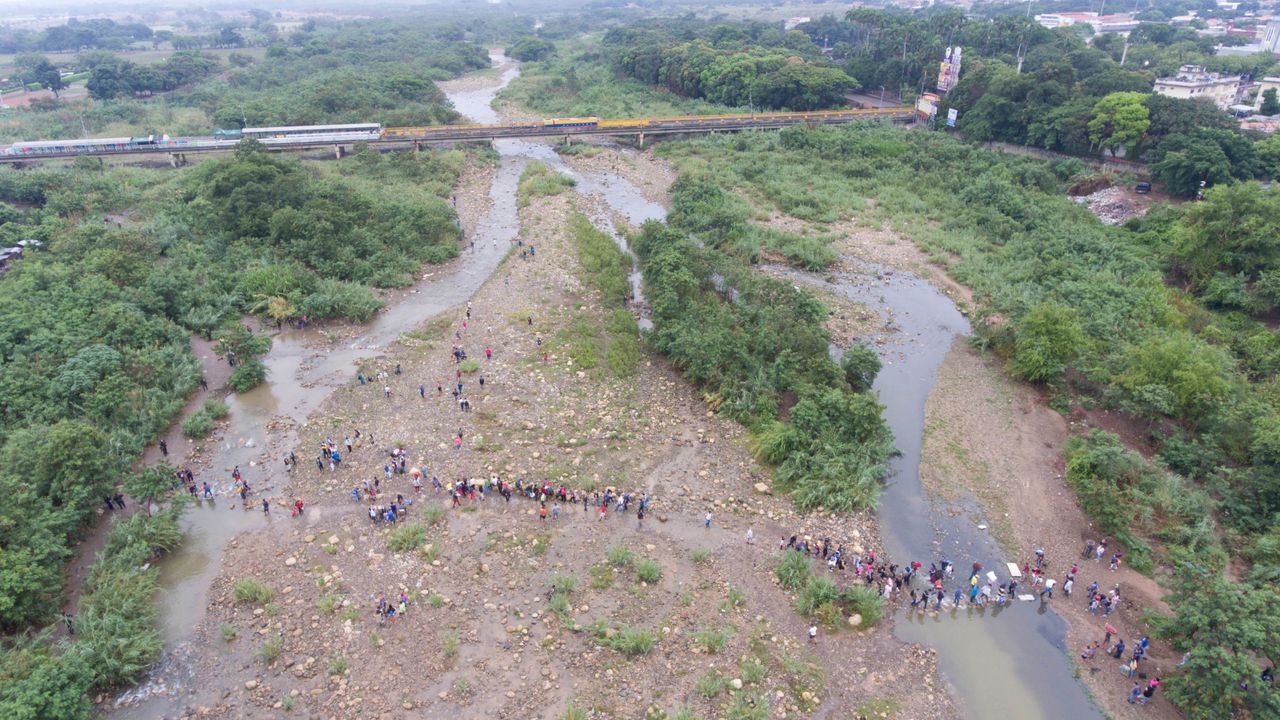 Colombia-Venezuela border. One of many illegal trails,this one just next to the Simon Bolivar International Bridge near Cucuta. Photo: Juan Pablo Cohen/La Opinion.

On Thursday, October 27, the president of Colombia, Gustavo Petro, ordered the closure of the numerous irregular crossings, known as “trochas,” which still exist on the Colombia-Venezuela border. This measure will be adopted with the intention of boosting binational trade and combating smuggling and corruption of Colombian and Venezuelan officials, the Colombian president said.

During an event on Binding Regional Dialogue in Cúcuta, capital of the department of Norte de Santander, President Petro stated that the expected economic impact of the complete reopening of the Colombia-Venezuela border, which he himself headed a month ago, has not been significant or profitable, since the trade of goods continues to be done through the illegal border crossings.

“After one month, only two and a half million dollars worth of goods have passed through the border. Where is the rest of the goods passing through?” Petro wondered.

“We opened the bridge, we made the effort, we took the political risk, and the economy continues to move through the illegal crossings, because there, officials and security personnel from there [Venezuela] and here [Colombia] are charging the commission,” expressed the Colombian president. “We are going to make changes on this side, and I am going to request changes on that side.”

Petro instructed his minister of Commerce, Industry and Tourism, Germán Umaña, to close the illegal crossings. “Those trails have to be closed,” he emphasized.

The president emphasized that the Simón Bolívar and Francisco de Paula Santander bridges, which connect Norte de Santander with the Venezuelan state of Táchira, were not opened “for those living here and there to fill their pockets and get rich.”

Petro added that if necessary, he will speak to his Venezuelan counterpart, Nicolás Maduro, about this issue, “because this border is for the people, not for the mafias.”

So far, the movement of people through the border remains limited and the passage of cargo trucks, which was a symbol of the reopening, averages three per day.

Venezuela’s response
The governor of the Venezuelan state of Táchira, Freddy Bernal, supported the statements made by the Colombian president in the framework of the binational plan to boost trade and end smuggling.

Bernal stressed that Venezuela will do “everything possible to coordinate jointly between Colombian and Venezuelan authorities” and support this initiative that will benefit the “liveliest border in Latin America.”

“On this side we have 200,000 personnel along the 164 kilometers of the border and more than 21 posts of the Bolivarian National Army, then there is the National Guard and then there are the police forces,” Governor Bernal added.

Bernal also spoke about Colombian criminal groups active in the border area and emphasized that authorities of both countries should work on a joint plan that gives best results for the region.

“On the Colombian side there are Los Rastrojos, Los Urabeños, the Gulf Cartel, the Aragua Train, La Línea, El Paisa… unfortunately the Colombian State does not have control of its border, that is why we join this exhortation made by President Petro, we support it,” Bernal explained.

He added that in conversations with President Nicolás Maduro and Vice President Delcy Rodríguez, he has recommended “the need for a binational meeting between both governors and military and police authorities of Norte de Santander and Táchira” to establish a plan for coordinated actions.

“The border problem is like dancing bolero, it takes two,” Bernal continued. “For years there has been only one dancer, which has been Venezuela; the Colombian side was missing.”

He added that President Petro’s initiative shows his commitment to improve the border situation. “At last Colombia has a president who is thinking about the border… because all the earlier presidents: Iván Duque, Santos, Uribe and those before them always abandoned the border,” Bernal stated.