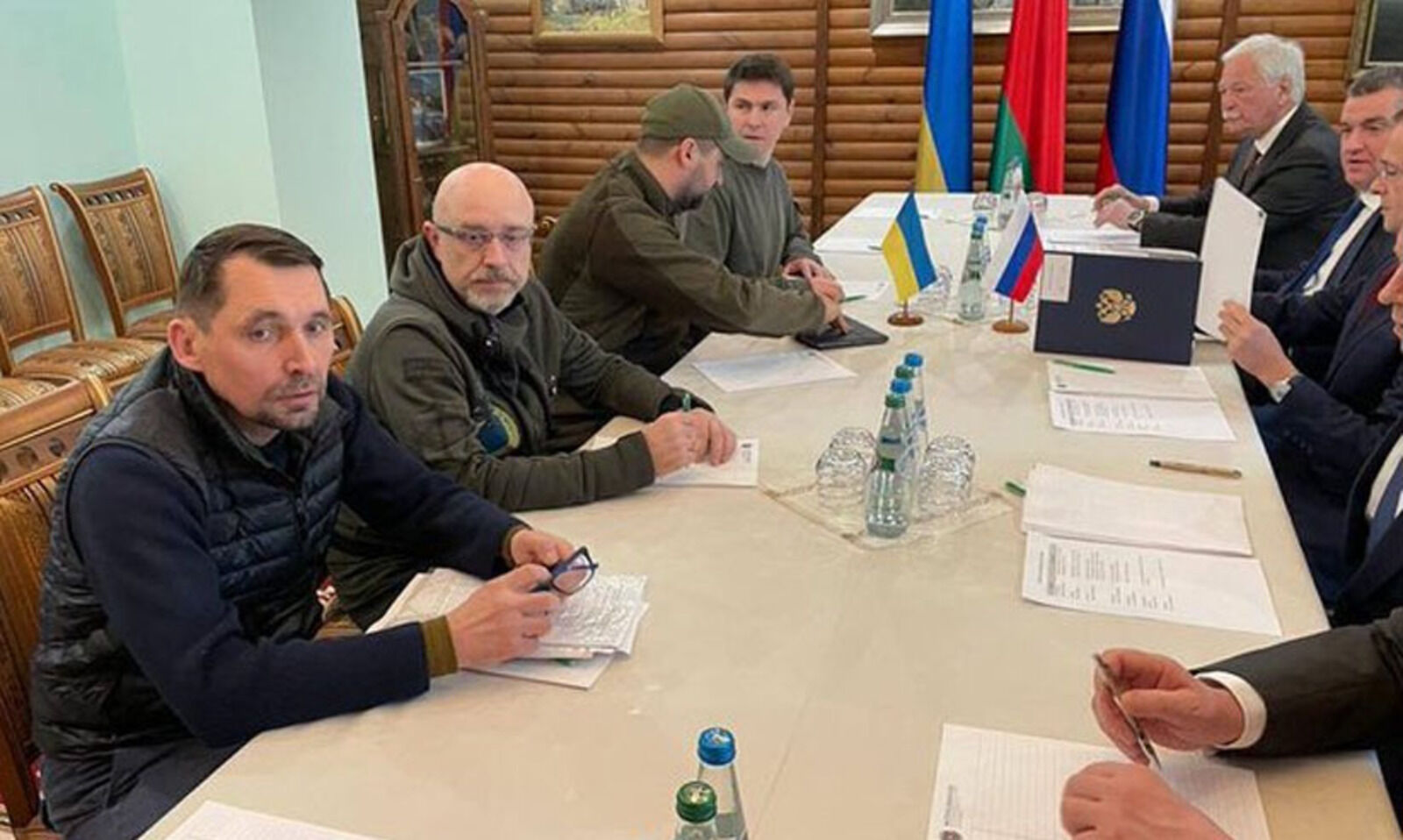 Russian and Ukrainian delegations during the third round of negotiations in Belarus, March 2022. File photo.

Russia invaded Ukraine on February 24, 2022. This war has been horrendous, though it does not compare with the terrible destruction wrought by the US bombardment of Iraq (“shock and awe”) in 2003. In the Gomel region of Belarus that borders Ukraine, Russian and Ukrainian diplomats met on February 28 to begin negotiations toward a ceasefire. These talks fell apart. Then, in early March, the two sides met again in Belarus to hold a second and third round of talks. On March 10, the foreign ministers of Ukraine and Russia met in Antalya, Türkiye, and finally, at the end of March, senior officials from Ukraine and Russia met in Istanbul, Türkiye, thanks to the initiative of Türkiye’s President Recep Tayyip Erdoğan. On March 29, Türkiye’s Foreign Minister Mevlüt Çavuşoğlu said, “We are pleased to see that the rapprochement between the parties has increased at every stage. Consensus and common understanding were reached on some issues.” By April, an agreement regarding a tentative interim deal was reached between Russia and Ukraine, according to an article in Foreign Affairs.

In early April, Russian forces began to withdraw from Ukraine’s northern Chernihiv Oblast, which meant that Russia halted military operations around Kiev, Ukraine’s capital. The United States and the United Kingdom claimed that this withdrawal was a consequence of military failure, while the Russians said it was due to the interim deal. It is impossible to ascertain, with the available facts, which of these two views was correct.

Before the deal could go forward, then-UK Prime Minister Boris Johnson arrived in Kiev on April 9. A Ukrainian media outlet—Ukrainska Pravda—reported that Johnson carried two messages to Ukraine’s President Volodymyr Zelensky: first, that Russian President Vladimir Putin “should be pressured, not negotiated with,” and second, that even if Ukraine signed agreements with the Kremlin, the West was not ready to do so. According to Ukrainska Pravda, soon after Johnson’s visit, “the bilateral negotiation process was paused.” A few weeks later, US Secretary of State Antony Blinken and US Secretary of Defense Lloyd Austin visited Kiev, and following the trip, Austin spoke at a news conference at an undisclosed location in Poland and said, “We want to see Russia weakened.” There is no direct evidence that Johnson, Blinken, and Austin directly pressured Zelensky to withdraw from the interim negotiations, but there is sufficient circumstantial evidence to suggest that this was the case.

The lack of willingness to allow Ukraine to negotiate with Russia predates these visits and was summarized in a March 10, 2022, article in the Washington Post where senior officials in US President Joe Biden’s administration stated that the current US strategy “is to ensure that the economic costs for Russia are severe and sustainable, as well as to continue supporting Ukraine militarily in its effort to inflict as many defeats on Russia as possible.”

Long before the Russian invasion of Ukraine, since 2014, the United States has—through the Ukraine Security Assistance Initiative of the US Department of Defense—spent more than $19 billion in providing training and equipment to the Ukrainian military ($17.6 billion since Russia invaded Ukraine on February 24, 2022). The total annual budget of the United Nations for 2022 is $3.12 billion, far less than the amount spent by the US on Ukraine today. The arming of Ukraine, the statements about weakening Russia by senior officials of the US government, and the refusal to initiate any kind of arms control negotiations prolong a war that is ugly and unnecessary.

Ukraine is not in Iowa
Ukraine and Russia are neighbors. You cannot change the geographical location of Ukraine and move it to Iowa in the United States. This means that Ukraine and Russia have to come to an agreement and find a solution to end the conflict between them. In 2019, Volodymyr Zelensky won by a landslide (73%) in the Ukrainian presidential election against Petro Poroshenko, the preferred candidate of the West. “We will not be able to avoid negotiations between Russia and Ukraine,” Zelensky said on a TV panel, “Pravo Na Vladu,” TSN news service reported, before he became president. In December 2019, Zelensky and Putin met in Paris, alongside then-Chancellor of Germany Angela Merkel and France’s President Emmanuel Macron (known as the “Normandy Four”). This initiative was driven by Macron and Merkel. As early as 2019, France’s President Emmanuel Macron argued that it was time for Europe to “rethink… our relationship with Russia” because “pushing Russia away from Europe is a profound strategic error.”

In March 2020, Zelensky said that he and Putin could work out an agreement within a year based on the Minsk II agreements of February 2015. “There are points in Minsk. If we move them around a bit, then what bad can that lead to? As soon as there are no people with weapons, the shooting will stop. That’s important,” Zelensky told the Guardian. In a December 2019 press conference, Putin said, “there is nothing more important than the Minsk Agreements.” At this point, Putin said that all he expected was that the Donbas region would be given special status in the Ukrainian Constitution, and during the time of the expected Ukraine-Russia April 2020 meeting, the troops on both sides would have pulled back and agreed to “disengagement along the entire contact line.”

Role of Macron
It was clear to Macron by 2020 that the point of the negotiations was about more than just Minsk and Ukraine; it was about the creation of a “new security architecture” that did not isolate Russia—and was also not subservient to Washington. Macron developed these points in February 2021 in two directions and spoke about them during his interview with the Atlantic Council (a US think tank). First, he said that NATO has “pushed our borders as far as possible to the eastern side,” but NATO’s expansion has “not succeeded in reducing the conflicts and threats there.” NATO’s eastward expansion, he made clear, was not going to increase Europe’s security. Second, Macron said that the US unilateral withdrawal from the Intermediate-Range Nuclear Forces Treaty in 2019—and Russia’s mirroring that—leaves Europe unprotected “against these Russian missiles.” He further said, “As a European, I want to open a discussion between the European Union and Russia.” Such a discussion would pioneer a post-Cold War understanding of security, which would leave the United States out of the conversation with Russia. None of these proposals from Macron could advance, not only because of hesitancy in Russia but also principally because they were not seen favorably by Washington.

Confusion existed about whether US President Joe Biden would be welcomed into the Normandy Four. In late 2020, Zelensky said he wanted Biden at the table, but a year later it became clear that Russia was not interested in having the United States be part of the Normandy Four. Putin said that the Normandy Four was “self-sufficient.” Biden, meanwhile, chose to intensify threats and sanctions against Russia based on the claims of Kremlin interference in the United States 2016 and 2018 elections. By December 2021, there was no proper reciprocal dialogue between Biden and Putin. Putin told Finnish President Sauli Niinistö that there was a “need to immediately launch negotiations with the United States and NATO” on security guarantees. In a video call between Biden and Putin on December 7, 2021, the Kremlin told the US president that “Russia is seriously interested in obtaining reliable, legally fixed guarantees that rule out NATO expansion eastward and the deployment of offensive strike weapons systems in states adjacent to Russia.” No such guarantee was forthcoming from Washington. The talks fizzled out.

The record shows that Washington rejected Macron’s initiatives as well as entreaties from Putin and Zelensky to resolve issues through diplomatic dialogue. Up to four days before the Russian invasion, Macron continued his efforts to prevent an escalation of the conflict. By then, the appetite in Moscow for negotiations had dwindled, and Putin rejected Macron’s efforts.

An independent European foreign policy was simply not possible (as Macron had suggested and as the former leader of the Soviet Union Mikhail Gorbachev had proposed in 1989 while talking about his vision for a “common European home” that would stretch from northern Asia to Europe). Nor was an agreement with Russia feasible if it meant that Russian concerns were to be taken seriously by the West.

Ukrainians have been paying a terrible price for the failure of ensuring sensible and reasonable negotiations from 2014 to February 2022—which could have prevented the invasion by Russia in the first place, and once the war started, could have led to the end of this war. All wars end in negotiations, but these negotiations to end wars should be permitted to restart.