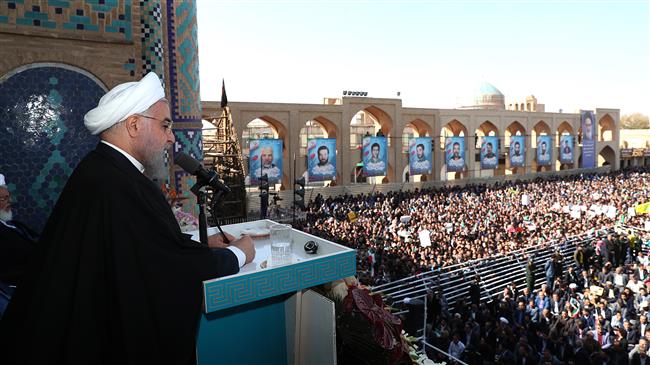 Rouhani told a large crowd of people in the central city of Yazd on Sunday that the discovery was made despite US hostilities which have mainly targeted Iran’s oil sector.

“It is a large oil field that extends from Bostan to the vicinity of Omidiyeh spanning an area of 2,400 square kilometers with a depth of 80 meters,” he said.

“Today we are announcing to the US that we are a rich country and despite your enmity and tyrannical sanctions, the Iranian oil industry’s workers and engineers have succeeded to discover this vast oil field,” Rouhani added.

The US has unleashed the “toughest ever” sanctions against Tehran since unilaterally withdrawing from the 2015 nuclear deal, officially called the Joint Comprehensive Plan of Action (JCPOA).

Rouhani said, “The first thing I would like to emphasize here is that we have withstood the pressure exerted by foreigners over the past year, during which our people had to go through difficult times.”

It’s been one year-and-a-half since President Donald Trump pulled the United States out of the nuclear deal with Iran and embarked on a policy of “maximum pressure.”

Trump has been piling sanctions and heating up the rhetoric against Tehran, saying he aims to negotiate a better agreement with Iran and his policy will bring the Iranians to the table for that new deal.

However, the maximum pressure policy has not succeeded in bringing Iran to the negotiating table or curbing its regional activities across the Middle East as sought by Washington.

“In fact maximum pressure seems to have backfired and pushed Iran across the edge,” British daily The Independent wrote on Saturday.

According to the paper, “economically, Iran has been able to draw on some of its financial reserves to cushion off the impact of American sanctions.”

Politically, Iran has been able to utilize the theme of nationalism and historic grievances about big power bullying and fend off any unrest, it said.

On Sunday, President Rouhani called on Iranians not to let “America’s wishes rise from the larynx of a few people, even though they are very limited in number.”

He said the Iranian people’s “resilience and unity and their ceaseless efforts have brought us to the point where the United States, in my opinion, has become disappointed.”

From an international perspective, The Independent says, the world is more sympathetic to Iran’s position in the nuclear dispute than the United States, because Iran stayed strictly committed to the nuclear deal for one year, after the US left the deal and violated its terms.

“There is also not much admiration for Mr Trump on the international stage – except among right wing authoritarian and neo-fascist groups – and that also helps Iran,” it added.

The Trump administration’s policy on Iran, the paper said, has isolated the United States and diminished its leverage to enforce the JCPOA, if not open the door to its complete destruction.

“At the moment, President Trump and his administration are running out of options on Iran. There is not much left to sanction in Iran, and short of military conflict, there is not a lot more pressure that can be applied,” it added.

Iran is a founding member of the Organization of the Petroleum Exporting Countries and sits on what were already the world’s fourth-biggest oil reserves and second-largest gas reserves.

The new find would add around 34 percent to Iran’s current proven reserves, estimated by the Oil & Gas Journal at 158 billion barrels of crude oil and representing almost 10 percent of the world’s crude reserves.