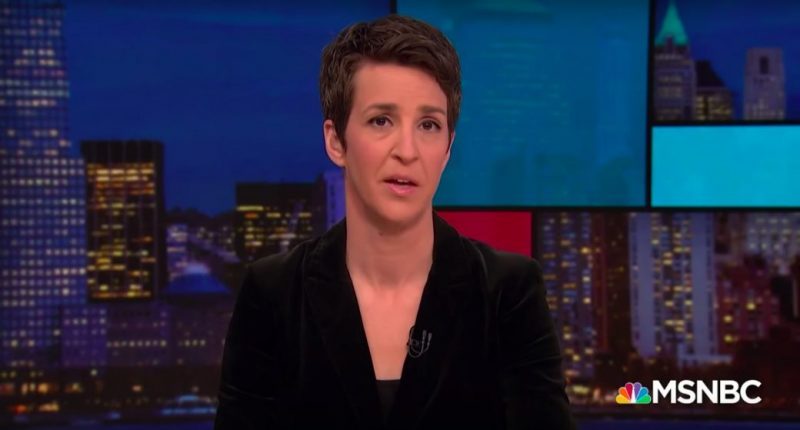 Rachel Maddow has aired a segment condemning the new indictment against Julian Assange for 17 alleged violations of the Espionage Act.

MSNBC’s top host began the segment after it was introduced by Chris Hayes, agreeing with her colleague that it’s surprising that more news outlets aren’t giving this story more “wall to wall” coverage, given its immense significance. She recapped Assange’s various legal struggles up until this point, then accurately described Assange’s new Espionage Act charges for publishing secret documents.

“And these new charges are not about stealing classified information or outsmarting computer systems in order to illegally obtain classified information,” Maddow said. “It’s not about that. These new charges are trying to prosecute Assange for publishing that stolen, secret material which was obtained by somebody else. And that is a whole different kettle of fish then what he was initially charged with.”

“By charging Assange for publishing that stuff that was taken by Manning, by issuing these charges today, the Justice Department has just done something you might have otherwise thought was impossible,” Maddow added after explaining the unprecedented nature of this case. “The Justice Department today, the Trump administration today, just put every journalistic institution in this country on Julian Assange’s side of the ledger. On his side of the fight. Which, I know, is unimaginable. But that is because the government is now trying to assert this brand new right to criminally prosecute people for publishing secret stuff, and newspapers and magazines and investigative journalists and all sorts of different entities publish secret stuff all the time. That is the bread and butter of what we do.”

RELATED CONTENT: As US Seeks to Crush Media Freedom, we All Need to Read Assange’s Letter From Prison

Maddow carefully explained to her audience that these new charges have nothing at all to do with the 2016 election or any of the Russiagate nonsense the MSNBC pundit has been devoting her life to, correctly calling what the Trump administration is doing with Assange “a novel legal effort to punch a huge hole in the First Amendment.” She tied this in with Trump’s common references to the mass media as the “enemy of the people”, finally taking mainstream liberalism into a direct confrontation with Trump’s actual war on the press instead of nonsense about his tweeting mean things about Jim Acosta. She rightly highlighted the dangers of allowing a president with a thick authoritarian streak the ability to prosecute journalists he doesn’t like, and discussed the possibility that the UK may not comply with this new agenda in extradition proceedings.

“I think these 17 espionage charges against the WikiLeaks guy are a huge deal, and a very dark development,” Maddow concluded. “Chris Hayes this evening called it a ‘four alarm development’, and I absolutely share that.”

“And, you know, I know you,” Maddow continued, pointing to the camera. “Given everything else that we know about the WikiLeaks guy, I can feel through the television right now your mixed feelings about what I am saying. I can feel what may be, perhaps, a certain lack of concern about Julian Assange’s ultimate fate, given his own gleeful and extensive personal role in trying to help a hostile foreign government interfere in our election in order to install their chosen president with WikiLeaks’ help. Okay? I know. Okay, I feel ya. I got it. But, it is a recurring theme in history, heck, it is a recurring theme in the Bible, that they always pick the least sympathetic figures to try this stuff on first. Despite anyone’s feelings about this spectacularly unsympathetic character at the center of this international drama, you are going to see every journalistic institution in this country, every First Amendment supporter in this country, left, right and center, swallow their feelings about this particular human and denounce what the Trump administration is trying to do here. Because it would fundamentally change the United States of America.”

Wow. Make no mistake, this is a hugely significant development. This isn’t just some columnist for the New York Times or the Guardian, this is Rachel effing Maddow, the Queen Mother of all tinfoil pussyhat-wearing Russiagate insanity. This same pundit was just a couple of months ago not just smearing but outright lying about Assange, deceitfully telling her audience that the new legal rings closing around Assange were about his 2016 publications then instructing viewers not to Google anything about it because they’ll get computer viruses. Now that she’s recognized that this could actually hurt her and her network directly, she’s finally feeding her audience a different narrative out of sheer enlightened self-interest.

The fact that such a hugely influential figure in mainstream liberal media is now pushing back against Assange’s prosecution, and doing so in a way that her mainstream liberal anti-Trump audience can relate to, cannot be over-appreciated. Maddow’s credulous audience would eat live kittens if she told them to, so the way she’s pushing back against a dangerous legal precedent in language they can understand will make a difference in the way American liberals think about Assange’s predicament. It won’t make them like him, it won’t make them value the things he’s done, but it will get them to finally begin resisting something that badly needs to be resisted. And that’s huge.

The danger has always been that this fatal blow to journalism would be meted out with total compliance and support from a population hammered into docility by the ongoing narrative war which has been waged on Assange’s and WikiLeaks’ reputations with the help of the mass media. There was a very real danger that thought leaders like Maddow were going to choose their feelings over reasoning when the foot finally fell and the charges that criminalize journalism as “espionage” were finally put into play. I don’t think anyone would have been surprised if she’d applied that giant intellect of hers into making it possible to ignore it without upsetting her audience and try and figure it out later when it was too late and the legal precedent was set. It would have been so easy to keep feeding into the dominant “Assange is bad so everything bad that happens to him is good” sentiment, but she didn’t. She directly contradicted it.

She actually chose to do the right thing. I’m gobsmacked, and it’s not an exaggeration to say that my hope for humanity sparked up a little today.

If the resting smugfaced apex of liberal psychosis is getting this one right, then many more will surely follow. And indeed, many already are. In addition to Hayes’ coverage of the story, MSNBC’s Ari Melber also did a segment harshly criticizing the implications of Trump administration’s new charges. We’re seeing multiple segments from CNN about the grave dangers of the legal precedent that is being set with the superseding indictment, as well as urgent warnings about the new charges from major publications like the New York Times, the Washington Post, and the Guardian. The outlets which have been smearing Assange relentlessly are now finding themselves forced to defend him.

A typical comment under Maddow’s YouTube share of this segment reads “This is very strange. Very alarming! There we go again. The GOP is preparing the country for a Dictatorship.” And okay, that’s not exactly what is happening (this has been a bipartisan push and it’s not just preparations, we’re in full swing), but whatever, now this viewer can actually see the monster’s outlines. Finally the Maddow crowd which has been fruitlessly expending all their energy so far on punching at Russian shadows will actually be attacking a real thing.

And I’m quietly excited about that. I’m eager to see what happens to the #Resistance if it actually starts #Resisting something. It doesn’t matter that this is only happening because mainstream liberal media outlets realized that they might be next on the chopping block; it matters that it’s happening, period. Last month I argued that all journalists everywhere should be defending Assange regardless of how they feel about him, “out of sheer, garden variety self-interest.” And now that’s happening, and that’s a good thing.

For years mainstream liberals have been fixating on the fake Russiagate psyop and rending their garments about Trump’s rude tweets while commentators like me desperately implored them to pay attention to the actual dangerous agendas that this administration is actually advancing. They’ve been in a holding pattern of adamantly refusing to do that, and now, because it’s threatening them personally, we’re suddenly seeing a sharp deviation from that holding pattern.

See this is what I’m talking about. If even virulent narrative managers like Maddow and Orr are vetoing Trump’s latest Assange charges, that’s a severe disruption in the narrative war against WikiLeaks. Yes they’re only doing it out of self-interest, but they’re doing it. pic.twitter.com/Jj3qRK8D9X

As Bill Murray said at the end of Groundhog Day, something is different. Anything different is good.