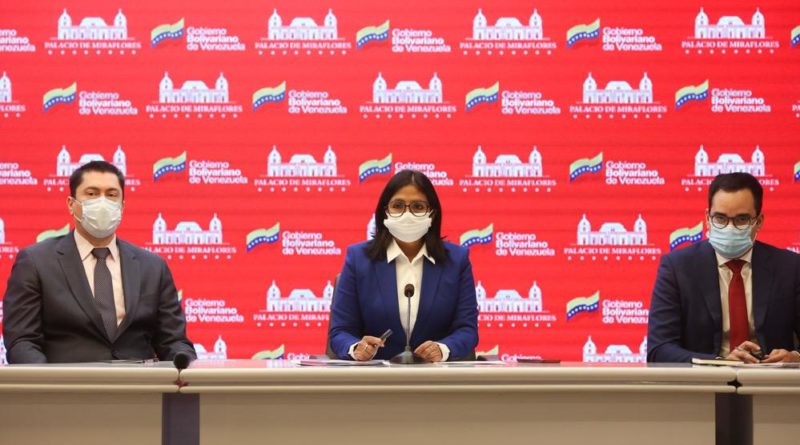 Following a request made this Thursday by President Nicolás Maduro, Venezuelan justice will open an investigation to determine the criminal responsibilities of those who have promoted the theft of Venezuelan gold in the United Kingdom. “An investigation will be opened with the goal of determining the criminal responsibilities of those who are participating in this robbery, in addition to the international actions that the General Prosecutor is preparing,” reported the Executive Vice President of the Republic, Delcy Rodríguez.

“We are never going to resign or rest in defense of the life of the people,” she said in a statements from Miraflores Palace broadcast by the Venezuelan Television channel (VTV).

Rodríguez also stresed that this complaint, after “the extravagant decision” of the English judge Nigel Teare that seeks to strip the Bolivarian nation of its gold resources stored in the Bank of England, will join the demand that the government of Venezuela is handling before the International Criminal Court (ICC).

Earlier, Teare asserted in his decision that, for the United Kingdom, the deputy in contempt Juan Guaidó is “unequivocally” the alleged “interim president” of Venezuela. Based on this position, he stated that only an “ad hoc” board representing the self-proclaimed can access the reserves.

Venezuela has at the Bank of England 31 tons of gold, more than a billion dollars, and since 2018 the Central Bank of Venezuela (BCV), a client of the aforementioned English bank, has requested its withdrawal.

In this regard, the vice president also said that the intention of Guaidó and his accomplishes is to satisfy their personal interests and those of the United States government using, among other resources, the gold of Venezuela retained in the Bank of England. In an attempt to confiscate these resources, they seek to “gain political recognition” that they have claimed after their self-proclamation, in a public square in eastern Caracas on January 23, 2019.

She explained that Neumann, a Venezuelan with US citizenship, together with the deputy Guaidó, lead an international circuit that seeks to seize in a “vulgar and piratical” way the resources of Venezuela.

The Vice President presented a telephone conversation between Neumann and Néstor Morales, a radio journalist and Colombian television host. In their conversation, the journalist asks her if Guaidó will be able to seize the 1.8 billion dollars in Venezuelan gold, located in the coffers of the Bank of England. “It would have to be seen, that is a process. We never intended to move that gold. The only thing that counts is the full recognition and the declaration of the chancellery of the entities of the British government, which have expressed their support for Juan Guaido,” Neumann replied.

Faced with the claims, Rodríguez reiterated that Neumann is a US agent who seeks to commit crimes against the Venezuelan people, including the theft of Venezuela’s assets abroad. “They are only there to steal and commit fraud,” stressed the Vice President.

She also pointed out that Neumann compromised the interests and rights of Venezuela on the Essequibo territory, with the sole purpose of receiving recognition from the UK regime for the virtual government of the self-proclaimed Guaido.

On May 14, the BCV sued the Bank of England in order to recover its reserves and sell the ingots to transfer the resources to the United Nations Development Program (UNDP) in order to acquire food and medicine for millions of Venezuelans. In this scenario, the BCV exposed to the justice of the European country that the decision to withhold resources is part of a political plan to financially pressure the Venezuelan government.

The political maneuvers of the US, Guaidó and other international entities have illegally confiscated several Venezuelan assets abroad, such as Citgo, a subsidiary of Petróleos de Venezuela (PDVSA) and Monómeros in Colombia.