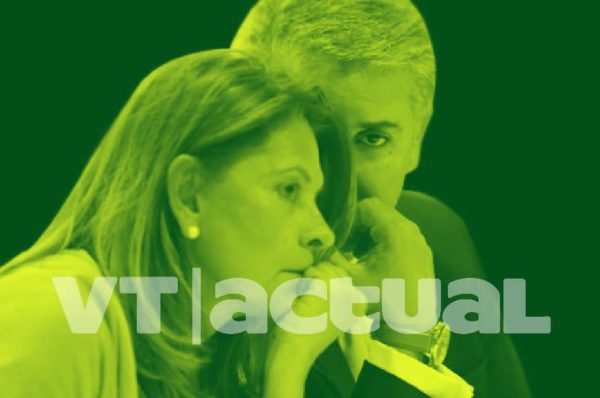 This has definitely been an annus horribilis for the Vice President of Colombia. If we were looking for a cinematographic metaphor to describe it, there is no doubt that it would be the scene from the thriller “Poltergeist” (1982) in which the coffins with the corpses of the cemetery in a beautiful neighborhood were beginning to emerge from the ground.

Marta Lucía Ramírez exhibits on Wikipedia a career that delights journalism from the heart: an elegant and glamorous Colombian politician and lawyer who, thanks to her intellectual and moral skills, was named Minister of Foreign Trade (1998-2002) during the Conservative government Andrés Pastrana, and Minister of Defense for the recently elected President Álvaro Uribe (2002), being the only woman to hold this position. In 2018 she was the vice – presidential running mate of the right-wing Iván Duque in the elections of that year, resulting in winners. Not bad, right?

“Under the moonlight, the skeletons dance in our oblivion …”
Recently, thanks to the revelations published on the web site “La Nueva Prensa” and an investigation by Gonzalo Guillén and Julián Martínez a series of VP Ramirez’ scandals came to light, who removed the bones of skeletons not very well kept in her closet. We will make a brief review of the most relevant of those skeletons.

The “narco-brother” and his bail
Taking the aforementioned investigation as a starting point, Senators Gustavo Petro and Iván Cepeda turned up the heat in Parliament and on social media.

In July 1997, Marta Lucía Ramírez, supported the payment of a US $ 150,000 bail for her brother Bernardo Ramírez Blanco, who that same year was arrested and sentenced in the United States to four years and nine months in prison on charges of drug trafficking.

Although in all the families there is a “black sheep” and the rest of the herd is not to blame, the vice president is asked why she had not made this “detail” public knowledge — because even though almost 23 years have already passed — in the time in which the current situation occured, Marta Lucía Ramírez held public positions as Minister of Foreign Trade.

Given these signs, her mentor –FBI most wanted #82 — came to her defense and Senator Gustavo Petro asked for her resignation:

Businesses with “Ghost Memo”
His drug trafficker brother is not the only link Ramírez is known to have with these mafias since she and her husband, Álvaro Rincón, were related in real estate business to the paramilitary and drug trafficker Guillermo León Acevedo Giraldo, alias “Memo Fantasma”.

“Operation Money Flight”
The Colombian VP, also ally of the self-proclaimed interim president of Venezuela, Juan Guaido, seems to be linked to a network of corruption and money laundering that involves her husband, Álvaro Rincón Muñoz, who was on the board of directors of the Miami-based company named Global Securities, discovered in the so-called “Operation Money Flight” carried out in the USA.

Álvaro Rincón Muñoz was one of the “substitutes” on the board of directors of the Global Securities group, Colombia subsidiary. It was learned that Mathías Krull, José Vicente Amparan and Fernando Vuteff, who is son- in- law of the Venezuelan fugitive Antonio Ledezma, are detained in this corruption plot.

According to the US courts, the suspects were being investigated for the laundering of $ 600 million, but in the course of the investigation the sum amounted to more than $ 1.2 billion, stemming from bribes and fraud at Petróleos de Venezuela (PDVSA).

Salvatore Mancuso and the Club “El Nogal”
The journalist, lawyer and criminologist Daniel Mendoza Leal in Chapter Three of his TV series “Matarife” mentions that Marta Lucía Ramírez -when she was the Defense Minister of Álvaro Uribe- held repeated meetings with the then wanted paramilitary chief Salvatore Mancuso at the El Club Walnut.

A few days after this serial episode aired, the law firm of Víctor Mosquera Marín announced that it will represent Vice President Marta Lucía Ramírez, in a legal process that will start against the producer of the series ‘Matarife’, calling it “a defamatory production.” Draw your own conclusions.

“And one that who was a human being, now is compost” Operation Orion
The Operation Orion was a military operation carried out between October 16 and 17, 2002 in San Javier — Comuna 13 — Medellin. It was commanded by members of the Colombian Military Forces, the Colombian National Police, the Colombian Air Force and the paramilitaries commanded by Don Berna. Marta Lucia Ramirez was Minister of Defense so she bears responsibility for this action that left 300 “desaparecidos”, according to different human rights organizations. Data that Anonymous recalled in recent days and that we share with you: