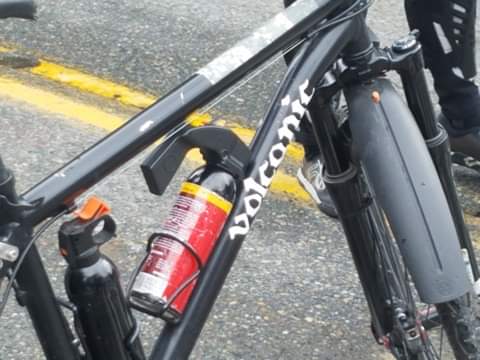 The Seattle federal judge’s restraining order banning tear gas, pepper spray, rubber bullets and concussion grenades put Seattle on the cusp of a potential historical turning point. Seattle has had the option to turn away from police violence after the judge’s order, making the judge’s order banning indiscriminate use of weapons on peaceful protesters a key to such a historic transformation.

But the use yesterday of rubber bullets and the brandishing of pepper spray in violation of the judge’s order are evidence of police resistance to this change. Moreover, the size of the Seattle Police Automonous Zone or SPAZ increased overnight somewhat, as police tape advanced to eliminate a key vantage point from which to photograph the Black Power fist sculpture.

Largely unreported at this point are the internal battles within Seattle city government for the soul of Seattle, which for the time being seem to have been won by police in defiance of both the federal judge’s order and of some of the more conciliatory statements of the mayor.

RELATED CONTENT: “The Heart of the Movement has Moved”

The black power fist is now confirmed dismantled. Police today say even they don’t know about this sculpture’s fate as even they are not allowed in the park. This may be taken as further evidence that CHOP anti-racism and black lives matter cultural militancy is intentionally being erased from existence, even though the fist certainly has cultural, artistic, historical and political value as a symbol of CHOP.

Early this morning, Omar Salisbury of Converge Media gave an emotional interview on KUOW public radio. Yesterday police had ordered Converge to cease broadcasting even though it has offices next to the east precinct. Police later backtracked and clarified by tweet that it was an “active and fluid” situation and the order to cease broadcasting was some sort of “misunderstanding.”

Salisbury did not speak directly to the attempted silencing of Converge broadcasting, but instead pointed out that no new city leaders emerged politically that were interested in really listening to protesters who, above all, simply wished to be heard. He also reminded public radio listeners that the east precinct was preserved against attempts to burn it down.

One might add that graffiti can be understood as the voice and the art of the voiceless, or of those who are simply not being heard. In this lens, the scrubbing of CHOP is seen as the erasure and cultural cleansing of the culture of anti-brutality.

There are some positive notes: the art piece that so far has been preserved is the Black Lives Matter road mural. Mixed into the paint in this mural are the ashes of someone’s mother. In addition, Seattle Mayor Durkan is plugging the creation of a community room within the east precinct where policing might be reimagined, and putting a longtime anti-brutality organizer at the head of that effort. One listener reacted to yesterday’s reporting here by pointing out that genocide is focused on the erasure of an entire culture — even though it typically also involves mass killing. Scrubbing CHOP can be interpreted as culture-erasing or cultural cleansing in this sense, so it will be important to see what decisions Seattle makes in terms of scrubbing CHOP or of preserving its rightful place in history. As one caller into a pandemic show on KUOW put it before being cut off: all eyes need to be on CHOP now.