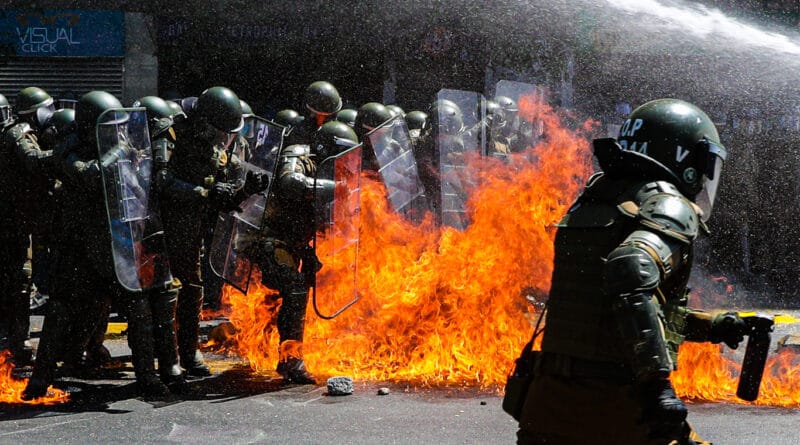 Historic protests are taking place across Latin America as people take to the streets to voice their displeasure at the IMF, government corruption, and the spread of fascism.

With attention fixed on this week’s events in Bolivia, you would be excused for not realizing that much of the rest of the region has for weeks also been ablaze in the flames of protest.

In Costa Rica, the neoliberal coalition government of Carlos Alverado attempted to force through a $1.75 billion loan from the International Monetary Fund (IMF) to deal with the economic fallout of the COVID-19 pandemic. As has been its modus operandi this year, the organization offered the money attached to a host of free-market changes, including tax changes, cuts to public services, and privatization of state-owned assets, something Alverado was more than happy to do.

Yet the people of Costa Rica clearly did not consent to the measures, launching a weeks-long general strike that paralyzed the country. Taking to the streets, they shut down dozens of the country’s principal transport arteries, fighting with many of the nation’s 30,000 strong police force.

The rebellion has resulted in a victory for the protesters, as Alverado announced the cessation of IMF negotiations.

Meanwhile, a little south in Colombia, the country is today heading into the second day of a national strike, with the country’s highly organized teachers’ union FECODE announcing a 48-hour work stoppage in opposition to conservative president Ivan Duque’s plans to reopen schools and other educational institutions with few protective measures, despite a COVID-19 pandemic raging through the country, killing between 100 and 200 people daily. The teachers join students, trade unions, and a host of other organizations in collective action against Duque’s government.

There is a wide range of grievances on display. Indigenous protesters are out in great numbers, demonstrating against the Duque administration’s treatment of them. Others are protesting against the country’s appalling human rights record. Colombia has long been the most dangerous place in the world to be an activist. Four more indigenous leaders were killed on Monday and Tuesday, with two narrowly escaping death. Their murders are rumored to be a retaliation for the mobilizations in Bogota, as thousands have traveled to the nation’s capital to voice their displeasure.

Much of Chile was ablaze this time last year, with citizens attempting to force the conservative government of Sebastian Piñera (the country’s richest man) to concede a vote on the country’s outdated, fascist-era constitution. The initial spark for the nationwide action was a hike in Santiago’s subway fares in order to subsidize private transport companies, but soon snowballed into much more. “It is an outrage that nearly 30 years since the end of the dictatorship, Chile should still have this Pinochet-era constitution in place,” founder and co-editor of Alborada Magazine Pablo Navarette told MintPress last year.

Chile’s referendum will take place on Sunday, with opinion polls suggesting that the people will overwhelmingly vote for change. The country has seen weeks of protest, some turning violent. Earlier this month, a police officer was filmed throwing a 16-year-old protester off a bridge, where he was left face down in the water with serious injuries. At the weekend tens of thousands of Chileans gathered in central Santiago to mark the one year anniversary of the protests that began the process of change, and to rally support for a “yes” vote this Sunday. They were met with force by the police, the resulting violence forcing the closure of at least 15 metro stations.

Meanwhile, in Haiti, U.S.-backed President Jovenal Moise is facing fresh waves of near-continuous protest, ever since he canceled elections and began ruling by decree. This weekend saw new demonstrations in the country’s capital, Port-au-Prince, blocking roads and calling for Moise’s resignation. Police fired tear gas and rubber bullets into the crowd, injuring many.

However, none of these protests have been given much attention at all in the Western press, who prefer to concentrate on demonstrations happening in enemy nations against adversarial governments. The 2019 protests in Hong Kong, for example, were given over 50 times the amount of coverage in The New York Times and CNN than the far deadlier and longer-lasting Haitian uprising.

Those out on the streets this week will no doubt draw inspiration from the events in Bolivia, where the government of Jeanine Añez suffered a catastrophic electoral defeat on Sunday at the hands of the grassroots Movement to Socialism (MAS) party. Añez, who came to power in a coup in November, insisted she was merely an “interim president.” Despite this, she postponed elections three times, while brutally suppressing organized resistance to her rule. However, a week-long general strike paralyzed the country in August, forcing Añez to concede to elections in October. Despite constant intimidation, the MAS won a resounding victory, setting the stage for the return of democracy to the Andean nation.

2020 has been an extremely turbulent year for the people of Latin America. While the region has suffered greatly thanks to the coronavirus outbreak, organized protest once again offers hope that a better world is possible. And with the Bolivian example fresh in their minds, the people might truly believe it is within their grasp.

Featured image:  Fire from a molotov cocktail explodes in front of police as a police vehicle shoots water at protesters who marched against the commemoration of the discovery of the Americas, organized by Indigenous groups demanding autonomy and the recovery of ancestral land in Santiago, Chile, Oct. 12, 2020. Esteban Felix | AP