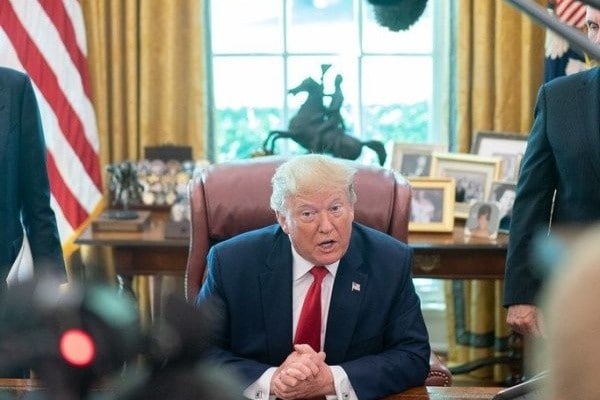 Sanctions are economic warfare, pure and simple. As an alternative to a direct military attack on a country that is deemed to be misbehaving they are certainly preferable, but no one should be under any illusions regarding what they actually represent. They are war by other means and they are also illegal unless authorized by a supra-national authority like the United Nations Security Council, which was set up after World War II to create a framework that inter alia would enable putting pressure on a rogue regime without going to war. At least that was the idea, but the sanctions regimes recently put in place unilaterally and without any international authority by the United States have had a remarkable tendency to escalate several conflicts rather than providing the type of pressure that would lead to some kind of agreement.

The most dangerous bit of theater involving sanctions initiated by the Trump administration continues to focus on Iran. Last week, the White House elevated its extreme pressure on the Iranians by engaging in a completely irrational sanctioning of Iranian Foreign Minister Mohammad Javad Zarif. The sanctions will have no effect whatsoever and they completely contradict Donald Trump’s repeated assertion that he is seeking diplomacy to resolving the conflict with Iran. One doesn’t accomplish that by sanctioning the opposition’s Foreign Minister. Also, the Iranians have received the message loud and clear that the threats coming from Washington have nothing to do with nuclear programs. The White House began its sanctions regime over a year ago when it withdrew from the JCPOA and they have been steadily increasing since that time even though Iran has continued to be fully compliant with the agreement. Recently, the US took the unprecedented step of sanctioning the entire Iranian Revolutionary Guard Corps, which is part of the nation’s military.

American Secretary of State Mike Pompeo has made clear that the sanctions on Iran are intended to cause real pain, which, in fact, they have succeeded in doing. Pompeo and his accomplice in crime National Security Advisor John Bolton believe that enough pressure will motivate the starving people to rise up in the streets and overthrow the government, an unlikely prospect as the American hostility has in fact increased popular support for the regime.

To be sure, ordinary people in Iran have found that they cannot obtain medicine and some types of food are in short supply but they are not about to rebel. The sanctioning in May of Iranian oil exports has only been partially effective but it has made the economy shrink, with workers losing jobs. The sanctions have also led to tit-for-tat seizures of oil and gas tankers, starting with the British interception of a ship carrying Iranian oil to Syria in early July.

Another bizarre escalation in sanctions that has taken place lately relates to the Skripal case in Britain. On August 2nd, Donald Trump signed an executive order imposing a package of new sanctions against Moscow over the alleged poisoning of former Russian spy Sergei Skripal and his daughter in England in March 2018. The order “prohibit[s] any United States bank from making any loan or providing any credit… except for loans or credits for the purpose of purchasing food or other agricultural commodities or products.” The ban also includes “the extension of any loan or financial or technical assistance… by international financial institutions,” meaning that international lenders will also be punished if they fail to follow Washington’s lead.

The sanctions were imposed under the authority provided by the US Chemical and Biological Weapons Control and Warfare Elimination Act adopted in 1991, which imposes penalties for use of chemical weapons. Novichok, which was reportedly used on the Skripals, is a chemical weapon developed in the labs of the Soviet Union, though a number of states are believed to currently have supplies of the agent in their arsenals. Russia can appeal the sanctions with 90 days by providing “reliable assurance” that it will not again use chemical weapons.

Russia has strenuously denied any role in the attack on the Skripals and the evidence that has so far been produced to substantiate the Kremlin’s involvement has been less than convincing. An initial package of US-imposed sanctions against Russia that includes the export of sensitive technologies and some financial services was implemented in August 2018.

Venezuela is also under the sanctions gun and is a perfect example how sanctions can escalate into something more punitive, leading incrementally to an actual state of war. Last week Washington expanded its sanctions regime, which is already causing starvation in parts of Venezuela, to include what amounts to a complete economic embargo directed against the Maduro regime that is being enforced by a naval blockade.

The Venezuelan government announced last Wednesday that the United States Navy had seized a cargo ship bound for Venezuela while it was transiting the Panama Canal. According to a government spokesman, the ship’s cargo was soy cakes intended for the production of food. As one of Washington’s raisons d’etre for imposing sanctions on Caracas was that government incompetence was starving the Venezuelan people, the move to aggravate that starvation would appear to be somewhat capricious and revealing of the fact that the White House could care less about what happens to the Venezuelan civilians who are caught up in the conflict.

Venezuelan Vice President Delcy Rodriguez condemned the move as “serious aggression,” and accused the Trump Administration of trying to impede Venezuela’s basic right to import food to feed its people.

One of the most pernicious aspects of the sanctions regimes that the United States is imposing is that they are global. When Washington puts someone on its sanctions list, other countries that do not comply with the demands being made are also subject to punishment, referred to as secondary sanctions. The sanctions on Iran’s oil exports, for example, are being globally enforced with some few exceptions, and any country that buys Iranian oil will be punished by being denied access to the US financial and banking system. That is a serious penalty as most international trade and business transactions go through the dollar denominated SWIFT banking network.

Finally, nothing illustrates the absurdity of the sanctions mania as a recent report that President Trump had sent his official hostage negotiator Robert O’Brien to Stockholm to obtain freedom for an American rap musician ASAP Rocky who was in jail after having gotten into a fight with some local boys. The Trumpster did not actually know the lad, but he was vouched for by the likes of Kim Kardashian and Kanye West, both of whom have had nice things to say about the president. The negotiator was instructed to tell Sweden that if they did not release Rocky there would be “negative consequences.” Who can doubt that the consequences would undoubtedly have included sanctions?

It has reached the point where the only country that likes the United States is Israel, which is locked into a similar cycle of incessant aggression. To be sure Donald Trump’s rhetoric is part of the problem, but the indiscriminate, illegal and immoral use of sanctions, which punish whole nations for the presumed sins of those nations’ leaders, is a major contributing factor. And the real irony is that even though sanctions cause pain, they are ineffective. Cuba has been under sanctions, technically and embargo, since 1960 and its ruling regime has not collapsed, and there is no chance that Venezuela, Iran or Russia’s government will go away at any time soon either. In fact, real change would be more likely if Washington were to sit down at a negotiating table with countries that it considers enemies and work to find solutions to common concerns. But that is not likely to happen with the current White House line-up, and equally distant with a Democratic Party obsessed with the “Russian threat” and other fables employed to explain its own failings.