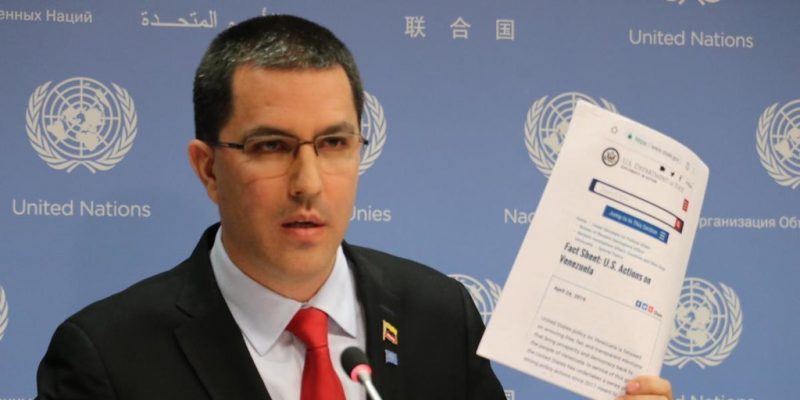 Last week, Jorge Arreaza, Minister of Foreign Affairs of Venezuela read a document posted by the US Department of State enumerating some of the “achievements” of the US unilateral and ilegal sanctions on Venezuela. He mentioned that the document can and will be use in legal proceedings on international courts against the US.

When you search the web you still (as for today) can find the document in a couple of websites but we expect that to change for worst in the next hours. That’s why we are posting it here in OT.

The official US Consulate in Brazil website have it still posted and we took enough screenshots to prove it, maybe they did not get the memo. It was also still posted in the EIN Newsdesk website and in a Foreign Affairs website from New Zealand.

It is obvious that the US government is working actively in strangling Venezuelan economy no matter how many Venezuelans they kill in the process, that is why it’s so important to have their own confession in writing even though this document lacks in counting all terrible effects this imperial and arrogant attitude have cause and is still causing on millions of Venezuelans just to achieve their regime change goals on a peaceful country only interested in promoting the well being of all Venezuelans.

This is the text of the document:

United States policy on Venezuela is focused on ensuring free, fair, and transparent elections that bring prosperity and democracy back to the people of Venezuela. In service of this goal, the United States has undertaken a series of strong policy actions since 2017 meant to pressure the former Maduro regime and support democratic actors.

The U.S. government has made over 150 designations of individuals and entities in Venezuela since 2017 via Executive Orders (E.O.) and the Kingpin Act. This includes 10 sets of designations in 2019 alone of multiple individuals, entities, and listings of properties. Such actions ensure the former Maduro regime cannot rely on the U.S. financial system for its destructive practices.