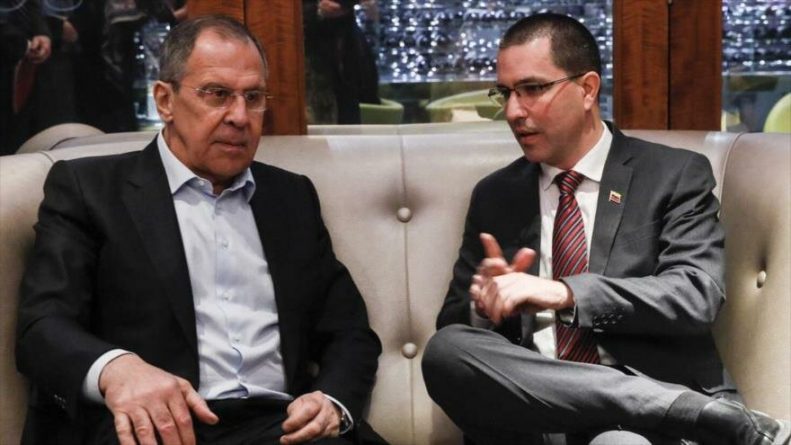 The Federal Republic of Russia expressed its indignation on Friday over the unilateral sanctions imposed by the government of the United States (USA) against the Minister for Foreign Affairs of Venezuela, Jorge Arreaza.

Through a statement, published by Prensa Latina, Russia said that these actions – which are in addition to the constant threats of the US against Venezuela – have as their fundamental objective to generate pressure in the country, in order to overthrow the Bolivarian Revolution and the President of the Republic. Bolivarian of Venezuela, Nicolás Maduro, elected on May 20 as head of state by more than 67% of the votes.

“Washington repeatedly demonstrates a categorical rejection of negotiation methods to resolve the situation in Venezuela (…) The United States discards in a demonstrative manner any opportunity for civilized dialogue with legitimate authorities in Caracas and seeks to prevent its international contacts, even in the headquarters of the UN, in New York (…) We see this step as another manifestation of the increasingly aggressive line of the White House to discredit international diplomacy and replaces it with dictates and cynical political and economic pressure,” the document said.

In this regard, Russia exhorted the government headed by Donald Trump to comply with international norms and laws and to curb threats of possible military intervention in Venezuela; and it urged the international community to join efforts to consolidate a dialogue between the Government and sectors of the Venezuelan opposition, to peacefully resolve the political situation in the South American nation.

According to Secretary of the Treasury Steven Mnuchin, the US will continue to impose sanctions, “including on those charged with conducting diplomacy,” AFP reported.

On the subject of the aggressions against Venezuela, Chancellor Arreaza warned on Thursday from the United Nations (UN) in New York, that if the United States enters the Caracas embassy in Washington, his country could take a reciprocal action.

RELATED CONTENT: US Would Evict Embassy of Venezuela in DC if Guaido Requests it

The United States reiterated that these sanctions do not have to be permanent and aim to “change behavior”. The Treasury announced that these assets must be reported to the Office of Foreign Assets Control (OFAC).