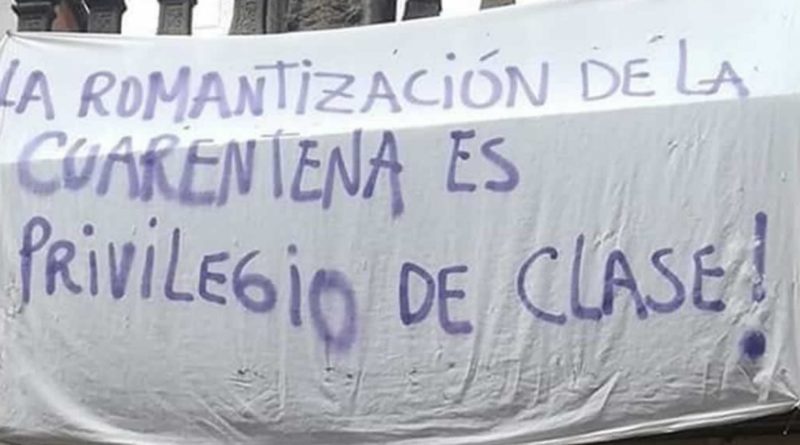 Rafael van der Vaart uploaded a video to Twitter where he shows us how he passes the time in quarantine: tapping his head on a ball in his heated pool. Jesé Rodríguez did the same with his own pool. It encourages us to continue training and urges us not to forget that we are not on vacation. In his video he appears running through a garden larger than my house, which in turn is probably larger than the vast majority of homes.

In another situation, seeing two soccer players in their natural surroundings — private planes with cream-colored leather seats, mansions with marble countertops, decorated with little less than questionable taste — would not have created a stir. That soccer players, like so many other professionals and not so professionals from different fields can bury us in money if they feel like it is something we already knew.

But this quarantine is making us realize, among other things, that social classes -in addition to existing- matter; that it is not the same to spend the quarantine in luxury mansions with huge gardens than in tiny apartments of public housing, where the windows are so small that hardly any light enters through them. That there are those who pass the quarantine on the street. “To romanticize quarantine is a class privilege” said a poster that hung from a balcony and then went viral. And yes, it is.

It is paradoxical that precisely when we are forced to isolate ourselves is when we realize that what the meme says is true: WE LIVE IN A SOCIETY. In a liberal and capitalist society, to be precise. And we realize it because the street equalizes us. When we leave the house and close the door behind us, we seem, for better or worse, all the same. We do more or less the same things, we wear more or less the same clothes, we talk more or less about the same series of shit and our life is, more or less, a concatenation of preparing food and putting it in tupperware and going to work and going to work and preparing food and putting it in tupperware.

But video calls and “stories”, the quarantine posts are making us perhaps more aware than ever of the importance of a home. How the class differences are evident in the light that enters them, in how full the shelves of their refrigerators and libraries are, in their square meters, in the decoration of their walls and even in their dishes. The working class uses plates and cutlery that they bought in a supermarket promotion, but some even have special spoons for coffee.

Since I was born 28 years ago and until today, I have lived in 13 houses. We moved 12 times, each one for a different reason. I have had rooms with balconies and chalets with patios and I have shared a room with my brother and my parents when, after their divorce, we had to learn to live separately and with half. But I have never thought as much as before about the importance of having a house, a home, and how neither the alignment of our teeth nor the way we speak or dress reflects so much where we come from and what we are.

I have been in quarantine for a week now in my shared apartment, which has two bathrooms and considerably larger rooms with even considerably larger windows. And since then I have not stopped thinking about my family and my friends, if they are well or not and, very often, at home. I think of my mother and her apartment on the ground floor, I imagine my father smoking cigarettes on the balcony and talking to the neighbor across the street and my grandfather in his corral full of flowers, ranting against “God and all the saints” because they have closed the retirement home. I think of Cynthia, who lives with her partner in a tiny apartment for just over $ 800 and my cousin Marta and Sara, who have a terrace almost the size of their apartment.

On Sunday a friend sent me a photo of him and his sister in the garden with a pool of their family home in the north of Madrid, they were doing sports on two extended mats. And I remembered the Hangouts that I had done 10 minutes before with other friends to do cardio and Cynthia in her study, in a house with several studios and patio in the center, it is one of those where you hardly have room to do an abdominal crunch between the sofa and the table. The table they have is folding so they can watch TV, because the only place where they could place it is right behind it. I also remembered when, in 2008, his father was fired from the bar where he worked. And the day he told me, at 18, that he had worried more about money than many people in his life would. And it was true.

In this quarantine we are realizing the importance of a house, a home, due to the difference it makes to spend a month locked in 40 meters or 100 meters. We are becoming aware of the extent to which they mark and, at the same time, reflect what we are, the walls between which we live. And we are beginning to notice, too, that there is an inversely proportional relationship between the amount of light, the dimension in meters, and fear these days. The smaller the house and the less light, the more fear. They fear for the father of the family who still has to go out to work and for the number that the cashier will dial when this happens.