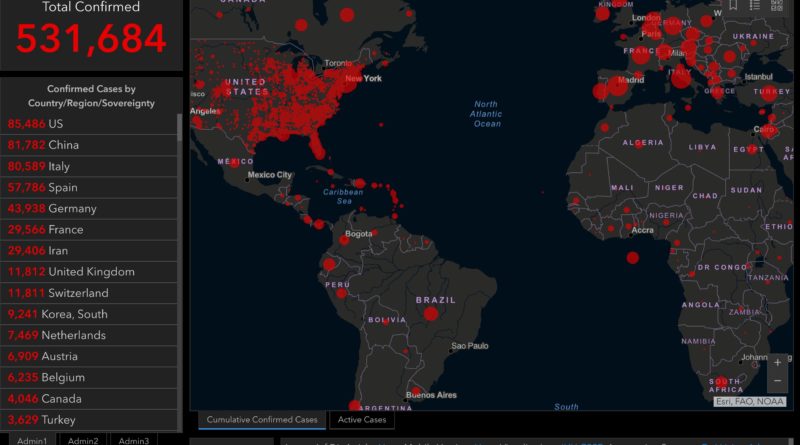 The World Health Organization (WHO) said Monday, March 23, that the United States could soon become the global epicenter of the new coronavirus pandemic. As this report is published, the US has more than 69 thousand confirmed cases and a little more than a thousand deaths due to the virus.

A figure that is probably inaccurate and does not reflect what is happening on the ground, since the United States is not employing the method of mass screening that South Korea successfully implemented, and that is being replicated in Venezuela, with the use of the Patria system.

Europe continues to be the region with the greatest focus of contagion. European governments, in an effort to curb the spread of the disease, have stepped up containment measures. The pandemic overwhelmed the health systems of some of its countries, as expected.

Italy, for example, has a death rate of around 600 deaths per day, the highest in the world.

The WHO sees a “very big acceleration” in the number of infected cases in the United States. This was reported by their spokeswoman, Margaret Harris, indicating that in 24 hours of new infections in the world (from March 22 to 23), 85% of them were concentrated in Europe and the United States, and 40% specifically in that country.

The Donald Trump administration has taken partial population restriction measures to counteract the effects that the uncontrollable growth of the pandemic could have in a few weeks.

The House of Representatives, with the support of Trump, approved a bill that supposedly would provide up to two weeks of paid sick leave for people with confirmed cases, as well as their families, to comply with social isolation. The rest of the country is exempt from this measure.

In addition, the Senate passed a law that would give money directly to American families in the context of the pandemic. However, a much larger budget was awarded to Wall Street.

In addition, the federal government vetoed the entry of foreigners from Europe for a period of 30 days. Trump alleged that this measure was justified by the failure of the European Union to install precautions against the coronavirus, despite the fact that his cabinet made the same mistake.

In his last televised speech, Trump played down the coronavirus, repeated again that it was “a flu” and declared that the country “was not designed to be closed”, so the possibility of relaxing preventive measures so they do not affect the country’s commercial activities, is there.

He said that officials have learned a lot about the pandemic since the first eight days of the administration’s “15 days to curb the spread” program, and hinted that the new measures will be more permissive.

“We lose thousands and thousands of people a year to the flu. We do not close the country (…) We lose much more than that in car accidents. We do not call car manufacturers to tell them ‘stop manufacturing,’” said the millionaire president.

Relaxing isolation so that the fortunes of American elites are not unbalanced because of Covid-19 can sicken millions and cause hundreds of thousands of deaths, in the latter case, at least 480 thousand Americans could die in a year from the disease in the best of scenarios. It is the estimate made by the University of Nebraska public health researcher James Lawler.

The range projected by epidemiologists from the Centers for Disease Control and Prevention (CDC) is much broader. Assuming the pandemic lasts a full year, and assuming that the U.S. government will take minor action, the possible deaths from the new coronavirus would range from 200,000 to 1.7 million.

In other words, in the worst-case scenario, the number of deaths from the “flu” would be greater than the number of Americans who die from cancer or heart disease.

The carefree rhetoric of the White House is beginning to explode in its face. In several cities, hospital capacities are being outstripped and local authorities are taking action on their own.

In Italy, more people die from coronavirus than in China. The focus of the disease is in the north-western region of Lombardy. Across the Atlantic Ocean, New York is becoming the Lombardy of the United States. Coronavirus cases are increasing at a worrying rate: there are more than 25,000 confirmed infected and 218 dead, the highest rate in the country.

State Governor Andrew Cuomo recently said at a press conference that the Trump administration’s search for ventilators for treating patients has been insufficient. Likewise, he revealed the concern about running out of capacity in hospitals, since the state has a deficit of 140,000 beds for the cases they are expecting, in addition to a lack of medical personnel.

An alarm in the “Big Apple” is already a fact in the city of Atlanta. On March 24, Mayor Keisha Lance Bottoms confirmed that all of the city’s Intensive Care Units (ICUs) were occupied. New patients admitted to hospitals with a critical health condition will not be able to be treated.

Trump ignored New York’s warnings, but on the same day as Cuomo’s remarks, the pandemic committee announced at the White House that people who had recently left the city were to be quarantined for 14 days “to make sure that the virus does not spread to others.”

“What happens to New York will end up happening to California and the state of Washington and Illinois; it’s just a matter of time. We are just getting there first,” the New York governor also said in his speech.

The response to Covid-19 has been left in the hands of the state governments and only a fifth of the country is following measures of social distancing. California, New Jersey, Connecticut, Illinois, Louisiana, Ohio, Oregon, Nevada, and Pennsylvania have issued their own quarantine and closing orders for non-core businesses.

However, the precautions of the regional authorities remain ineffective for the peak of the growth curve, similar to that of New York, which they will have to face in a matter of days.

Florida is an example of this. Just a week ago, large groups of people could be seen partying on Miami’s beaches, ignoring WHO recommendations to stay indoors. Now many of them are testing positive for Covid-19.

Public health experts and local officials have pressured Governor Ron DeSantis to issue a temporary quarantine order. “You simply cannot lock up our society indefinitely with no end in sight,” DeSantis replied at a press conference on March 24. “It is not sustainable. It is not something that society would accept.”

What is the growth rate of the state of Florida? The report on Monday, March 23, showed 1,171 people infected with the virus. “A week ago there was less than half that amount,” says an article published by the Tampa Bay Times.

Examining the experience of China and Europe, the main objective of any country in facing the pandemic should be to prevent the rapid spread of the coronavirus to prevent further disasters in the health system.

The interest in protecting the economy first is not going to allow the Donald Trump government to consider the Asian model of harsh controls of isolation and paralysis of the non-strategic sectors of the country for the protection of society.

Although last week he suggested a more drastic approach to address the expansion of the coronavirus, the President of the United States has resumed the rhetoric of dismissing the severity of the pandemic, and thereby ordering much less aggressive actions.

This attitude coincides with that of the United Kingdom until recently, but which it abandoned when the dead began to be numbered in the hundreds. Now, the government headed by Boris Johnson is moving in the opposite direction, imposing an almost total closure of the country.

Instead, the speech of various officials is focusing on convincing the population that there is no solution to the vulnerable situation to which they are condemned, omitting the fact that it is the political decisions of the White House that is putting hundreds of thousands of people at risk of death.

It is better to sacrifice the working class for the financial health of a small group. And the first tribute that Dan Patrick offers, lieutenant governor of Texas, are American grandparents.

“Let’s go back to work. Let’s go back to life. Let’s do it intelligently (…) And those of us who are 70 years old or older will take care of ourselves. But let’s not sacrifice the country,” said the Republican in an interview for Fox News.

Allowing the older adult population to be exposed to the disease is a proposal that borders on eugenics, since 79% of deaths from coronavirus that are being recorded in the United States are of people over 65 years of age .

The rejection of this sector of the population is not a new position among the voices of neoliberalism. In 2012, the International Monetary Fund (IMF) published an analysis referring to the “risk that people live longer than expected” and proposing measures to cut benefits and delay retirement age to cushion the “cost” that would be incurred for governments and companies.

If resources cannot be directed towards the prevention of coronavirus infections, much less will they be directed to the treatment of confirmed patients. According to a TIME magazine publication, a person infected with Covid-19 can pay up to $ 34,900 to be hospitalized in the United States.

*From this perspective, the medical industry need not be disrupted by a pandemic.

Following Washington’s logic, the only culprits for the health emergency that will inevitably spread throughout the territory will be American citizens, for the simple fact of not having enough money to pay for proper medical care.

Featured image: Screenshot of Coronavirus COVID-19 Global Cases by the Center for Systems Science and Engineering (CSSE) at Johns Hopkins University’s Map on Thursday March 26 at night whet the US already was as #1 in the list of confirmed cases.