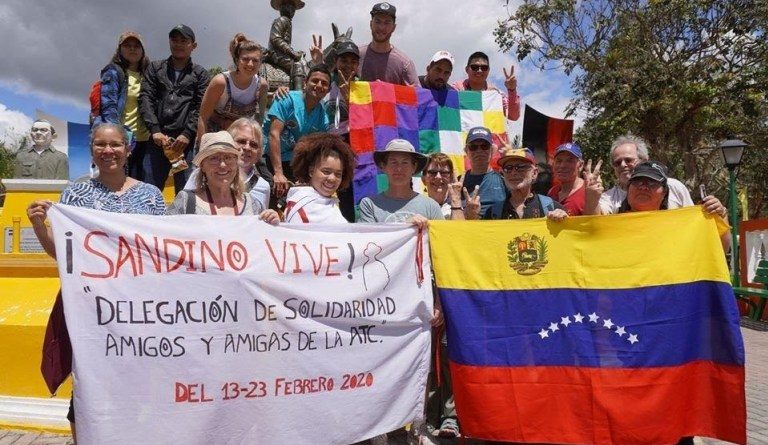 La Asociación de Trabajadores del Campo, ATC, (Rural Workers’ Association) was founded before the victory of the Sandinista Revolution in 1979. Small farmers and laborers organized to form cooperatives and unions to defend their rights to cultivate land with native seeds, use agroecology, empower women, and educate youth to stay in the countryside. In the 1990’s, the ATC participated in founding La Via Campesina, the International Peasants’ Movement that now has 182 member organizations in 81 countries.

The delegation carried the name of Sandino, who is Nicaragua’s national hero, having defended the north of Nicaragua by guerrilla warfare against control by the US Marines from 1927 until the Marines were defeated and left in 1933. Sandino formed the first cooperative in Wiwili in 1933, but it was destroyed by the National Guard when he was assassinated. The first instances of aerial bombings occurred in Ocotal, Nicaragua, in July, 1927, and the Marines bombed Sandino’s camps multiple times after that, but they never defeated him. He fought against US imperialism (US control of countries for the benefit of US companies), because it was greatly worsening the plight of peasants in the Nicaraguan countryside. A nationalist, he refused to sell out to US control as both the Conservative and Liberal Parties had done.

The delegation traveled for ten days, first seeing the beautiful Salvador Allende Port and Luis Alfonso Velazquez Park in Managua, both built for the recreation of families, and the Sandino museum in Niquinohomo.

The countryside visits began with the Marlon Alvarado Community near Santa Teresa, Carazo, a shining example of food sovereignty, helped by ATC and FSLN programs that brought land, a good road, electricity, potable water, decent homes, seeds, schools, health care, and training in agricultural methods to the residents. Emerita Vega, a local leader, remembers, “In the time of Somoza, I had to ride a horse with two buckets five kilometers to get water for my family, and often the road was so muddy it was impassable. We had no school, so I didn’t learn to read until I was an adult.”

Many of the families in the Marlon Alvarado Community have land thanks to the very important agrarian reform that was carried out in the 1980s after the triumph of the Revolution. The agrarian reform created a large base of peasants with land. They now grow beans, rice, corn, coffee, bananas, raise cows and pigs, chickens, honey, eggs, and more, all of which contribute to the country’s very high level of food sovereignty, about 90%.

Next the group divided up: Some visited the Gloria Quintanilla Women’s Coffee Cooperative near El Crucero, where women own the land, domestic violence has been eliminated, and everyone uses agroecological methods to grow their food and the coffee that they process for sale. Others went to La Montañita, west of Estelí, in the Dry Corridor where rainfall is low. The ATC and FSLN government of President Daniel Ortega brought the coop a good road, electricity, potable water, a school and a health center. Both communities welcomed us into their homes with open arms for three days, a new experience for some of us.

One topic that our delegation was interested in was how these communities were affected by the 2018 coup attempt. Sandinistas were targeted at the infamous roadblocks set up around different parts of the country, and there were millions of dollars of damage to both public and private infrastructure. Nevertheless, the international media claimed they were innocent students protesting with slingshots. While the opposition wanted to completely shut down the country’s
economy, they never could, because over 70% of the country’s workers
are employed in the “popular” or grassroots economy of cooperatives,
self-employed workers, individual small farmers, including those who
make up the ATC in communities like Marlon Alvarado, Santa Julia and
La Montañita, the opposition could never shut down the popular economy and, along with its food self-sufficiency, this makes Nicaragua especially resilient to imperialist aggression.

In the end, people self-organized to take down roadblocks and defend their properties and homes. We heard about how men and women from Santa Julia participated in taking down the roadblock in El Crucero, and how worker-owners of the San Nicolas Tobacco Cooperative in Estelí defended their land with machetes against take-over.

Delegation member Stansfield Smith said, “I was most impressed by the commitment of the pro-Sandinista Nicaraguans to defend the many economic and human rights gains made under the presidency of Daniel Ortega. They were not fooled by the 2018 protests, and saw it was a US coup attempt operation; they recognized Daniel Ortega’s ability to outmaneuver it, and are better prepared than before for the next one. I was also impressed by what an example Nicaragua is for other countries, compared to Honduras, El Salvador and Guatemala. We must really work hard to defend Nicaragua, so the US won’t turn it into another Honduras.”

On February 19th, National Cooperatives Day, between Somoto and the Honduran border, we were received by the president of the Union of Agricultural Cooperatives of the North of the Segovias (UCANS), Rafael Lovo. UCANS coordinates many cooperatives that produce corn and beans in Madriz. President Lovo explained that organizing in cooperatives is a way for communities to improve their living conditions and grow more food for their people. Today Nicaragua has a thriving economy of 5,000 cooperatives inspired by Sandino, the majority of which are in the agricultural sector. One interesting part of the visit to the UCANS was seeing the dozens of silos filled with red beans that will be sent to Venezuela through the Manito’s Children’s Fund, www.ManitosChildrensFund.org.  Donations to this Fund through the Alliance for Global Justices buy beans from cooperatives to feed underfed children in Venezuela.

The next day we traveled to Jinotega, to visit the ATC’s Primero de Mayo Cooperative in La Union, east of Lake Apanás. Cooperative president (and ATC-Jinotega General Secretary) Rosalpina Gutierrez explained the long struggle for land in Jinotega. With the Revolution’s Agrarian Reform, more than a hundred thousand families received land. In the 1980s ATC members had to defend themselves from US-directed Contra attacks. And in 90s, much of the land was effectively stolen under neoliberal president Violeta Chamorro to give to large landowners who left during the revolution and demanded their land back in the 90s. Additionally, Chamorro’s government gave land to ex-contras.

Our last visit was to San Rafael del Norte, home to Augusto Sandino’s wife, Blanca Arauz, who was the telegraph operator there during the war to expel the Marines. February 21 is the day when Nicaraguans commemorate Sandino’s death in 1934 at the hands of the US-trained/funded/directed National Guard headed by Anastasio Somoza.  In a rousing speech, Jinotega Mayor Leonidas Centeno exclaimed, “We wish we could have delegations visit us daily and see for themselves all that our Sandinista government has done to improve the lives of its citizens!”

Mayor Centeno described the free education, including free school backpacks, given each year to hundreds of thousands of children, free healthcare including specialized tests like MRIs and dialysis treatments, and the excellent roads that allow for movement of people and goods between city and countryside. He charged us with taking this image of a peaceful and progressive Nicaragua home with us to tell the true story. Then we participated in their parade with our flags of Nicaragua, Cuba, Venezuela, the Wiphala of Bolivia, and the ATC, to place flowers at Sandino’s statue.

Sandino, we can see that you are alive and strong in Nicaragua. Viva Sandino!