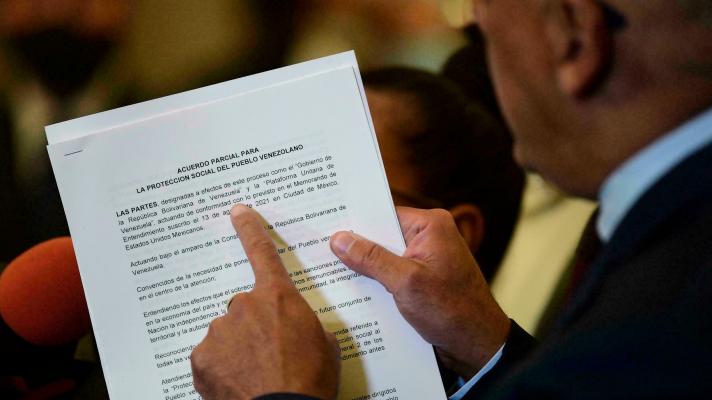 After four days of discussions in Mexico for the second round of dialogue and negotiations between the Venezuelan government and the so-called Unitary Platform of Venezuela, the parties published a joint statement this Monday night, September 6, announcing the signing of two partial agreements.

The statement said that “the parties agreed to establish mechanisms for restoring and obtaining resources to meet the social needs of the population, with special emphasis on the effects of the COVID-19 pandemic, including those from multilateral organizations that the Republic has the right to access.”

Joint statement by the parties of the #Venezuela dialogue and negotiation process in Mexico.https://t.co/BFJYo86awO pic.twitter.com/VVIPtzFkvw

The document also includes the agenda for the upcoming round in the Mexico Talks, scheduled for the end of September:

• “The discussion will also continue regarding the protection of the national economy, and social measures and services for the Venezuelan people, including discussion of Venezuela’s Special Drawing Rights, provided for this purpose by the International Monetary Fund (IMF).”

The dialogue continued with special attention to the use of “consultation mechanisms with political and social actors that are as inclusive as possible.”

As for the partial agreements, the first consists of a “partial agreement for the social protection of the Venezuelan people” and has six points. A National Board of Social Welfare will be installed to address the areas of health and food for the general population; the management of pandemic will take priority; there will be a “review process” of the western sanctioning regime against Venezuela to ensure that “resources for the welfare of the People of Venezuela are guaranteed;” and a system will be put in place to monitor the parties to ensure compliance with the partial agreements.

The second is an ” agreement for the ratification and defense of the sovereignty of Venezuela over Essequibo [disputed with Guyana],” which confirms that Venezuela’s territory historically corresponds to what, before the declaration of independence of 1810, was called the Captaincy General of Venezuela, and reiterates that the 1966 Geneva Agreement is the current legal framework for the border dispute between the Bolivarian Republic of Venezuela and the Cooperative Republic of Guyana. The agreement has four parts, including ratification of Venezuela’s right to the Essequibo territory in question, rejection of the Arbitration Award of 1899 and of Guyana’s request to the International Court of Justice to rule on the territorial dispute bypassing the 1966 Geneva Agreement signed between both countries, and a proposition to renew negotiations with Guyana according to the Geneva Agreement.