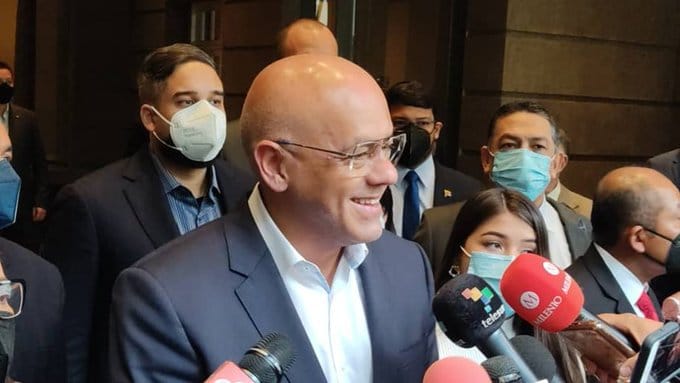 Caracas, September 4, 2021 (OrinocoTribune.com)—Jorge Rodríguez, leader of the Venezuelan government delegation in the ongoing dialogue in Mexico, reported this Saturday, September 4, that the second day of the talks was focused on reaching partial agreements related to lifting US and European illegal sanctions and the illegal seizure of assets affecting millions of Venezuelans.

“There is a willingness to put all our efforts to achieve partial agreements soon,” Rodríguez said, adding that “this is a great opportunity for Venezuelans to regain their right to economic freedom.”

“We are very attentive to the economic guarantees that have been cut off, blocked, stolen—stolen from the people of Venezuela,” he asserted.

“The talks are proceeding in a cordial atmosphere, which implies a positive element,” said Rodríguez, commenting that the work that is being carried out is very difficult.

RELATED CONTENT: Round 2 of Mexico Talks Begin – Jorge Rodríguez: ‘I Believe This Work will Bear Fruit’

He also informed that there is “a memorandum of understanding that we are going to address in its entirety.” 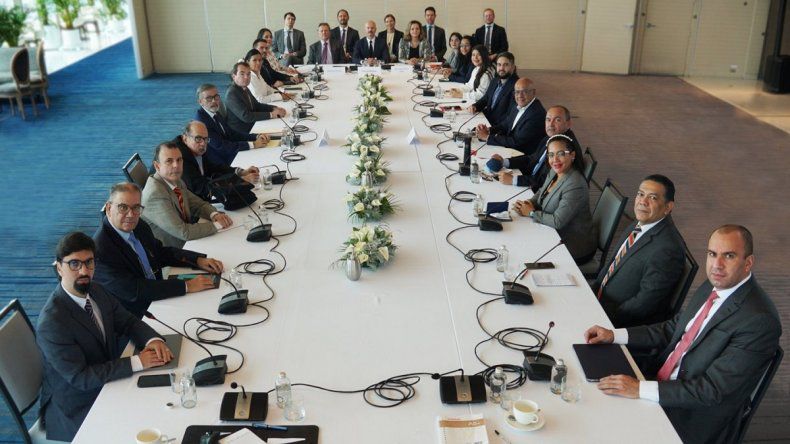 This Saturday, the Kingdom of the Netherlands and the Government of the Russian Federation participated in the negotiations as observers.

“This is a process that begins, that is hard, that is complex, that requires hours and hours of work and we are willing to work as long as it takes to produce early agreements for the benefit of the country and agreements that are contained in the agenda,” insisted Blyde.

RELATED CONTENT: Government of Venezuela Polishes Agenda for 2nd Round of Mexico Talks

“It is important that everyone knows that we came here to work, and we are working to produce agreements for the country,” he continued, and asked those who wish to add proposals to the issues being discuss in the Mexico Talks should do so as they are very clearly defined in the memorandum signed by all the parties.

“Ambassador” Vecchio whining for being removed by the opposition delegation
In the middle of the dialogue process taking place in Mexico City, the opposition arrived with a change of members in its delegation. Carlos Vecchio, who is supposed to be the “ambassador” to the United States for former deputy Juan Guaidó in his imaginary “interim government,” was replaced by Freddy Guevara, a former deputy of the National Assembly, who is a member of Guaidó’s Popular Will party and one of his close aides.

Vecchio announced his retirement from the delegation through a statement that he posted this Saturday, September 4, on his Twitter account, where he also announced his replacement by Freddy Guevara.

The statement, which is a mix of reiterations of Washington’s talking point against Venezuela, praises his role in the illegal sanctions and the illegal seizure of Venezuelan assets abroad, which have severely harmed millions of Venezuelans. The message also contains criticism of the government of Norway for being “complacent” with the Venezuelan government, and a veiled criticism of the delegation and the leadership of the Opposition Unitary Platform, and gives the impression that the extreme right opposition politician is planning to enter an electoral race.

Rodríguez, asked about the statement issued by Carlos Vecchio as the head of the government delegation exited the meeting, preferred not to comment in order not to “contaminate the good atmosphere of the negotiations,” and also suggested that “it would be good if you [the press] ask the opposition representatives” why Vecchio is not part of their delegation anymore.

Featured image: Jorge Rodríguez speaks to the press at the end of the second day of the second round of the Venezuelan dialogue going on in Mexico. Photo: Twitter.