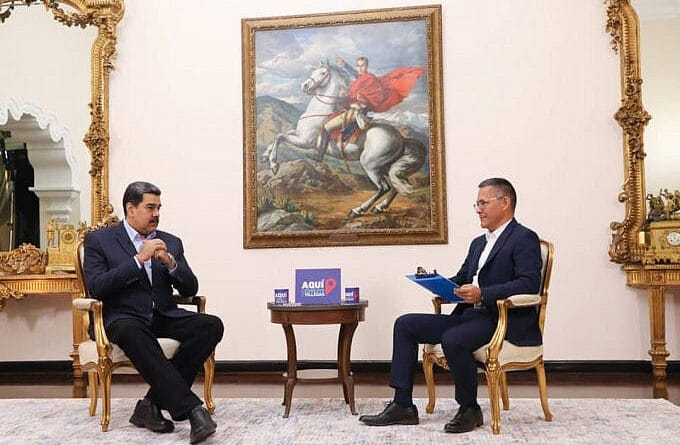 On Sunday, September 5, the President of Venezuela, Nicolás Maduro, emphasized that the Venezuelan National Dialogue process established in Mexico (Mexico Talks) resumes mutual recognition of Venezuela’s political forces, highlighting the work of the new National Assembly in this process. “The people elected a new National Assembly that has known how to occupy the space of the country’s Legislative Power as an eminently political, deliberative and legislative institution,” said the head of state in an interview on the show Aquí con Ernesto Villegas, hosted by the Minister for Culture, Ernesto Villegas Poljak, and broadcast by Venezolana de Televisión.

The president highlighted the two points on the agenda brought by the government of Venezuela to the Mexico Talks. The first is the immediate lifting of all sanctions and the immediate return of all seized or blocked bank accounts, assets and gold belonging to Venezuela. The second is a statement in defense of the legitimate rights of Venezuela over the Essequibo territory.

There is no duality of power
“In Venezuela there never existed duality of power,” emphasized the president regarding the duality of power narrative promoted by the opposition. “That there were two governments that governed the territory, the population, the institutions, the public policies? Never. There was only one legitimate government, the Constitutional government.”

RELATED CONTENT: On Messi, YouTubers, Migration, and ‘Venezuela Got Fixed’

“Here there was never a duality of political power,” he continued, “what was there was a brutal campaign against Venezuela. They sought the overthrow of the government, the destruction of the Bolivarian Revolution and a kind of political and economic colonization of Venezuela.”

“When we sit at that table, we understand that we sit with the government of the United States, because those are the politicians dependent on the United States,” stressed the head of state. “That is the truth!”

He also asserted that there will be no impunity for the opposition leaders who have committed crimes against the nation. “The extremist opposition has done a lot of damage to the life of the Venezuelan families, through the theft of CITGO, Monómeros, stealing more than $8 billion in bank accounts abroad, and the theft of the gold seized by the Bank of England,” explained President Nicolás Maduro.

In this sense, the head of state asserted that the Venezuelan government is seeking “to build a country that produces wealth and distributes that wealth for the economic, social, and cultural happiness of all the people of a country united in peace.”

“Sooner rather than later we are going to achieve a fair market, fair prices, and control the distortion created as a result of the economic war,” said the head of state.

Vaccination process
President Nicolás Maduro affirmed that to date 30% of the Venezuelan population has been vaccinated, through alliances with China, Russia and Cuba in order to access vaccines and medical equipment for the country’s vaccination process.

“We were forced to adopt an alternative plan because we found that the COVAX mechanism was being slowed down,” decried the president. He also announced that the first vaccines from COVAX will arrive in the country in the coming days.

“Venezuela has a very reliable protocol for COVID-19 treatment that has allowed us to combine the most powerful antivirals in the world with ours, free of charge for Venezuelans,” added the president.

“The Venezuelan health system is stressed, as are those of the world, but we are attending to it, and will continue to take care of patients, in addition to guaranteeing a smile, a gesture of love and the best medicines in the world free of charge for all,” he asserted.