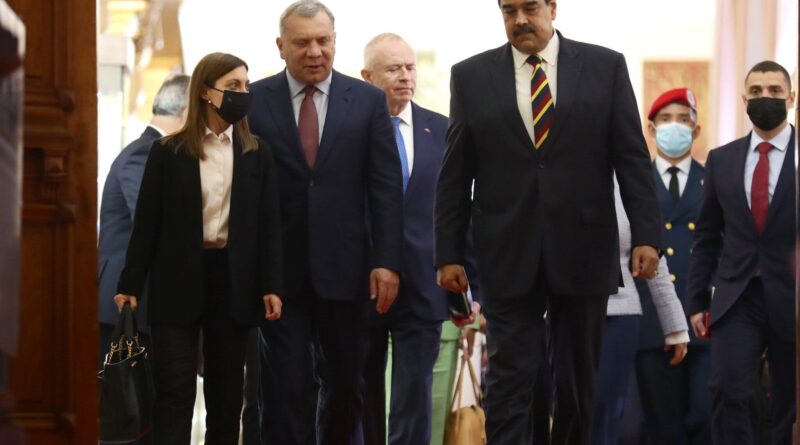 Caracas, March 6, 2022 (OrinocoTribune.com)—Yesterday, the New York Times (NYT) published a news piece by hardcore anti-Chavista journalist Anatoly Kurmanaev, about an alleged visit of Washington top officials to Venezuela, in an attempt to weaken the solid alliance between Caracas and Moscow amid the Ukrainian conflict.

The first paragraph of the NYT hit piece claims that “senior US officials are traveling to Venezuela on Saturday to meet with the government of President Nicolás Maduro, according to people familiar with the matter, as the Biden administration steps up efforts to separate Russia from its remaining international allies amid a widening standoff over Ukraine.”

The Venezuelan investigative news website La Tabla posted a thread on its Twitter account, pointing out that the piece is inconsistent with Washington policies, because it claims that the US administration is trying to obtain support from a government that it has considered a threat for seven years, and on which it has imposed multiple illegal sanctions, which have impacted the lives of the entirety of the Venezuelan population.

In a tweet, La Tabla posted: “It is even striking that the anniversary of the executive order—declaring Venezuela an unusual and extraordinary threat—is March 8, but the Joe Biden administration advanced the renewal and did so five days earlier this year. If the contact with the Maduro government was planned, it could have waited a few more hours for renewal.”

The NYT article continues: “Russia’s invasion of Ukraine has prompted the United States to pay closer attention to President Vladimir V. Putin’s allies in Latin America, which Washington believes could become security threats if the standoff with Russia deepens, according to current and former US officials who spoke on condition of anonymity to discuss sensitive policy matters.”

For some analysts this statement reinforces the narrative of a scenario developed by Washington to try and expand US/NATO aggression against Russia in Europe and bring it to Latin America, as Joe Biden’s advisor, Juan González, stated a few days ago that illegal sanctions against Russia were made “by design” to also impact Cuba, Nicaragua and Venezuela.

The US news outlet, owned by Amazon’s Jeff Bezos added: “It is unclear how long the US delegation, which includes senior officials from the State Department and the White House, will remain in Caracas or with whom the group will meet. Spokespeople for Mr. Maduro and for the State Department and the National Security Council in Washington did not respond to requests for comment.”

La Tabla also questioned the author’s credentials, adding that the author of the piece is veteran Anatoly Kurmanaev, an “expert” on issues related to Venezuela, who “in May 2018 opened a campaign on GoFundMe asking that his friends, instead of giving him gifts for his wedding, donate money to the children’s kitchens program Alimenta La Solidaridad, led by opposition leader (an ally of Juan Guaidó) Roberto Patiño.”

The Venezuelan government has not yet issued any comments about this NYT piece, 24 hours after it had been published. However, it is known that the piece was prepared by reporters who only cite “people familiar with the matter” as sources without giving any names, claiming they are working “undercover” for supposedly “journalistic confidentiality.”

The piece is considered by many in Venezuela as part of a psychological operation (PSYOP) aiming to break the solid alliance between Russia and Venezuela, something that seems very far from reality if looked at from the Venezuelan side. To give more credibility to the story, the NYT uses the argument of oil prices and oil market disruption—caused by US illegal sanctions—as the excuse for the alleged meeting between Venezuelan and US officials.