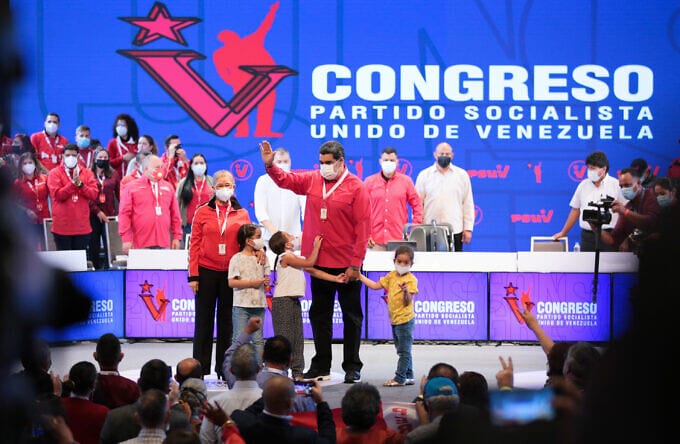 “Zero tolerance for corruption and the moral rottenness of a few,” Venezuela’s President Nicolás Maduro said at the Fifth Congress of the United Socialist Party of Venezuela (PSUV) on Saturday. “If they are involved in acts of corruption, in criminal acts, wherever they are, whatever they have been,” added the head of state, “they will be taken to court and to prison, and punished with the greatest penalties.”

PSUV President Maduro recalled that the Venezuelan government, in recent months, has detained mayors, deputies, and other public officials involved in gasoline trafficking, and others implicated in drug trafficking.

Noting the Congress’ prioritization of ethics and revolutionary values ​​that oppose corruption, bureaucracy, and bureaucratism, Maduro expressed his desire that justice be meted out to those who get involved in “narcopolitics,” whether from the left or from the right.

“Let them know, those involved in that,” said the president, “that we are coming for them and we are going to get them. We are not going to allow a project as beautiful as Bolivarianism, socialism of the 21st century, to be contaminated by Colombian narco-politics.”

RELATED CONTENT: PSUV is Against Corrupt Officials, There will be No Impunity, Says Diosdado Cabello

Venezuela also faces corruption in the trafficking of COVID-19 treatments by illegal crime networks within the healthcare system, added the president.

“It is a bitter struggle, sometimes painful, because you have to get rid of people that you loved, that you valued,” recalled President Maduro. “It is the great theme of the ethical, spiritual and moral rebirth of the Bolivarian Revolution, of the United Socialist Party of Venezuela.”

Focus on the morals of civil servants
The PSUV must strive to “apply a process of rebirth of revolutionary ethics and morality in all men and women leaders who hold public office,” encouraged Maduro, “a rebirth of morality, of commitment, of consciousness.”

For several minutes, Maduro insisted on the need to reinforce revolutionary values ​​in the face of corruption and bureaucracy. “It should not be a theoretical issue, it should serve to unmask the values ​​of capitalism, of consumerism.” He insisted that the PSUV Congress serve for the prioritization of the ethical and moral values ​​of revolutionary leaders.

Concrete proposals
He invited PSUV members to advance concrete proposals to confront corruption, in addition to presenting complaints. In some institutions, the president related, he has heard that they make statements such as “Maduro rules there, but I rule here.” For those individuals who say such things, said Maduro, the law will come for them if it is  appropriate. He recalled that the people are the only ones ruling in Venezuela.

The president also urged PSUV national delegates to contribute concrete proposals for the configuration of the 1X10 Plan for Good Governance, the roadmap of solutions, and the Concrete Action Agendas (ACA) of the Bolívar-Chávez Battle Units (UBCh).

President Maduro also emphasized that the Congress must be held “with open doors for our people, to listen to the truth of the people, [to] bring our truth to the people, and define the guidelines for resistance, rebirth, and the changes that Venezuela needs.”

The event also marked the Fourth Congress of the United Socialist Party of Venezuela Youth (JPSUV).