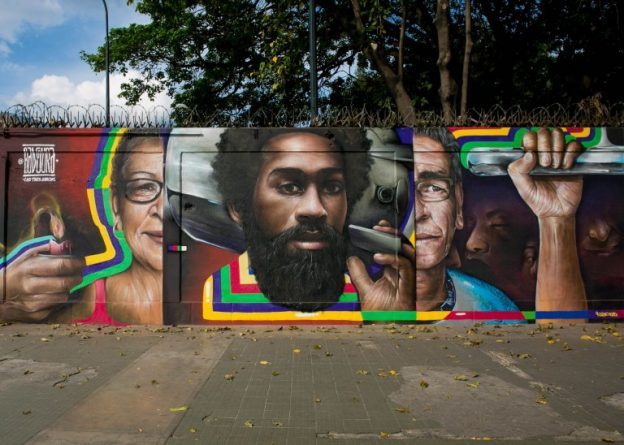 On Saturday around ten o’clock in the morning we reached the agreed point. As soon as he got into this strange, wonderful and fascinating device called a car, in which three friends from Caracas were traveling, Gerardo, who lives in La Carucieña, the largest neighborhood in Barquisimeto, decided to grant us a five-minute extension. First he wanted to check if it really was, if we really had been able to fill the gas tank, if it was not a ruse, a bad taste joke that we were making.

Gerardo came to think that he would never again know the interior of a car. After a few blocks, and after allowing himself to enjoy that marvelous experience, letting himself be caressed by the soft and delicious breeze of the air conditioning, he started with us, inclemently, with an incomparable sharpness, foolproof.

He asked us if we had problems with internet connection in Caracas. Somewhat surprised, we answered that the service worked, but that it failed with some frequency, that it was slow and, to make matters worse, a few days ago it had collapsed for hours in some areas and in others even for a couple of days. Unable to disguise his laughter, he told us that Miguel, his oldest son, kept track of the time they had without Internet at home: nine weeks. He revealed his plan: when he arrived at nine-and-a-half weeks they would celebrate it, watching the famous movie of the same name, it does not matter if Miguel is not old enough to see it. The occasion deserves it.

The problem, he continued telling us, is the electric light service. He asked us how things were going in Caracas.We replied that the electricity rarely fails, only in some specific places, such as in Ciudad Tiuna or Caricuao, who knows for what reason. He explained something we knew partially, because we have friends and family in Lara, but it is one thing to learn by third parties and another is to live it: almost all Barquisimeto is without light for up to twelve hours, sometimes more, sometimes less, every day. You can speak, therefore, of a certain regularity, although it is practically impossible to know when it will go, much less when it will return. Except when the President visited the city, recently: that day the service was provided uninterruptedly. Far from celebrating, the bulk of the population was on hot coals the entire day, waiting for the impending cut. Night came and the light was still there, stubbornly. They went to bed worried about what the next day would bring. But not to stray: the point is that, given the circumstances, it is not possible to know if, when the day comes, they will be able to enjoy the film.

Eventually the light arrives, but they still do not have internet service, and the land line telephone does not work at home for a longer time. The latter does not matter so much: after all, almost everyone has their cell phones at hand, although less and less smart. There will be no internet on the personal computer, but with electricity, and if data is available, you can browse for a while. The problem, as is known, is that to use cell phones it is necessary to be able to charge them. But hey, one step at a time, you have to be smart, patient, see the glass half full and not half empty, that’s a pessimist’s thing.

The thing is that water service is impossible. That is to say, there is almost never water in La Carucieña. This being so, it will be understood that it is not possible to fill any glass, so there is no other way to imagine it half full. And of course they get it: imagination, popular inventiveness, that’s never missing.

For some strange reason, Gerardo did not ask us if we had water in Caracas. He wanted to know, instead, how we were doing with the gas service. And yes, there are many places in Caracas with gas problems, but none of us in the car have them. He accused us of being privileged. We urged him to reduce his hostility towards us, under threat of getting him out of the car. He let out another laugh, and told us that in the barrio, they have been cooking with firewood for a long time, sometimes several families taking turns to take advantage of the stove, that it is not easy to get firewood and they can not afford to waste the fire. He confessed that several times he has faced the dilemma of burning still green or wet wood and therefore have to deal with the almost unbearable smoke or burn the furniture and books of the house. When he assured us that his library had been cut in half, we suspected he was exaggerating, but we were left with the doubt.

We protested once again the fact that he turned all his resentment on us, his dear Caracas friends and, with general laughter, we demanded that he think of the people of Táchira, Zulia, Delta Amacuro. He answered us, this time in all seriousness, that what happens with those people is always in their thoughts: they can not imagine what it must be like to live in a town or border town, so far from the capital of the country, so close to everyday tragedy.

When we arrived in Sarare, we told several friends in common about everything we had to listen to during the trip. As if relieved, almost satisfied, the Sarajean friends told us that at least the electricity service had been regularized a bit, that what never came was the CLAP. So far this year it only came when they were fortunate to receive, at the same time, a member of the national leadership of the PSUV. That was all it took: Gerardo rushed into details about the irregularity of CLAP in La Carucieña, the people of Sarare told us of the permanent sabotage against the company of direct social communal production that is responsible for the distribution of gas in the municipality, at the same time that the town was left without electric power for five days and the mayor took refuge with his family in a hotel with a generator, and it was like starting again.

At night, without losing a moment of good humor, Gerardo told us that much of the popular malaise associated with the terrible provision of services was perfectly digestible, that the situation was even understandable: many people know that, at least in part, the that suffering is the product of the war against the people, that there is a direct relationship between the imperialist sanctions and the problems of everyday life, that what is sought is to break the popular will. What is absolutely intolerable, he explained to us, more than the corruption of some officials of the companies providing services, is the inconsistency of the government, the fact that, as a rule, those responsible do not face, explain or report, but above all, do not accompany the people. What bothers you most is feeling alone, not unprotected, but alone, a popular loneliness that contrasts with an official discourse that abounds in references to the “protection” of the people.

Gerardo is undoubtedly a lucky man: the next day, after stocking up at the El Maizal Socialist Commune store (which, incidentally, Gerardo complained irately, because how are these Caracans to come to buy cheaper in Sarare? ), in spite of everything he had put us through, we gave him a lift to his house. Lie: to Vargas Avenue. We left him there as punishment, so he had to grab the shuttle or, as they say in Barquisimeto, the route to La Carucieña.

While we were still on the road, he sent us a wasapp message: he had managed to get home, all good. I replied: “Oh, but you got a ride and you have electricity. Then don’t go complaining later. Ingrate”.