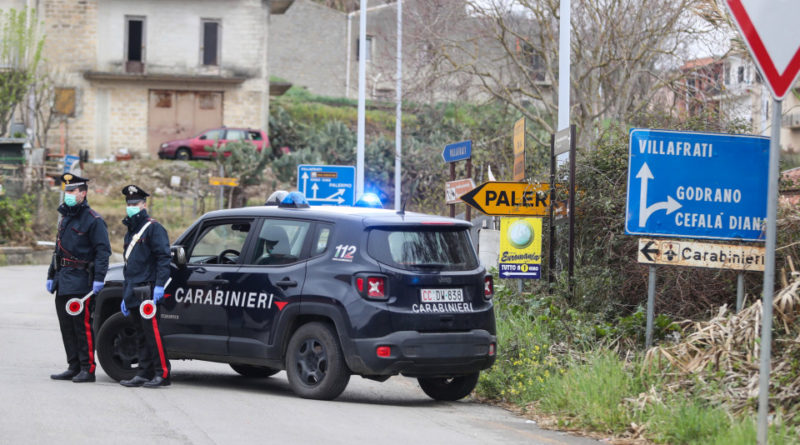 Citizens in difficulty due to the crisis launch aggressive messages on social networks, with calls for revolt

Rome, March 30, 2020.- The health emergency is also becoming, as feared, a social emergency in southern Italy: Fearful social protests are feared and the first looting has begun, forcing supermarkets to equip themselves with special surveillance. A cry of alarm emerges strongly from the south, echoed by Italian mayors and Italian intelligence services warning the government: “The people are hungry. ” The signals are many and dramatic, turning viral in a few hours. One of them is a video of a father and his daughter biting a slice of bread with Nutella. In a threatening tone he addresses Prime Minister Conte and the Mayor of Palermo in a threatening tone: “If my daughter will not be able to eat a piece of bread, we will storm the supermarkets.”

Precisely in Palermo, an organized group of twenty people appeared, before the boxes of a Lidl supermarket – in Via Regione, one of the largest and most frequented in Palermo – with their carts full of products, refusing to pay while shouting: “Enough of being at home, we don’t have money to pay, we have to eat.” The employees of the supermarket called the police, while panic spread among the large public waiting on the street, queuing with a safety distance of one meter between people. The chaos went on for hours. To avoid the worst, law enforcement agencies are watching today to protect supermarkets in Palermo and other cities.

Calls to revolt
Calls to revolt spread like wildfire on social media. The profile of a group called “Noi” has been opened on Facebook, which encourages the revolt with a slogan: “Take back what is taken from us.” Within hours, he had hundreds of followers, some of whom are organized via chat. Their messages leave no room for doubt. There are those who say: “Those who are ready for war on the 3rd (date foreseen for the end of the emergency, although it is certain that the government will decree an extension), must write it out here”, “we must break into all the supermarkets.” Another writes: “The problem is immediate, the children must eat.”

RELATED CONTENT: Upside Down World: Now the US Says That Coronavirus in Venezuela Endangers the Region

Alexander’s message is similar: “I don’t wait for April, I am without a euro, my family must eat.” Many play videos, showing their identity, calling for social revolt, letting their own children be seen. Luky shouts in one of those videos: “At home there may be those who have a fixed salary, if we must be locked up, the State has to bring us food and must pay the rent, we are not Cristiano Ronaldo: Here three quarters of Italians work in black (informal economy); Rebel!” According to a recent study by the CGIL (main Italian union), in Palermo, one out of three worker “works in black.”

Robberies on the street
The call for looting of supermarkets is not only in Sicily, it extends to other places in the south. In that half of Italian territory, the underground economy employs almost four million people. In Campania, particularly in some areas of the province of Naples, robberies on the street have increased, with people taking bags with products that some customers have just bought in supermarkets. Rare is the day where in some southern provinces there is no assault on a pharmacy. There are people who shout their anguish and hunger from the balcony. In Bari, the capital of Apulia, the Minister for Social Affairs, Francesca Bottaloci, had to personally appear to bring two packages of basic necessities to a family she had placed in social networks a video screaming from the balcony of his house: “We no longer have money, we have nothing. Come see.”

The so-called 007, the information service, has produced a reserved report sent to Prime Minister Conte and Interior Minister Lamorgese with this warning: “There is a potential danger of spontaneous and organized revolts and rebellions, especially in southern Italy, where the underground economy and the capillary presence of organized crime are two of the main risk factors.” It does not escape anyone that the mafias are always ready to take advantage of any explosive occasion. For mafia organizations, the coronavirus represents an optimal opportunity for their criminal businesses.

That risk of the mafia is warned by the mayor of Palermo, Leoluca Orlando, who says that organized crime will take advantage to lead the revolts. The alderman of the Sicilian capital asks the government to grant a survival income: “Alongside many who are living through this moment of very serious crisis with anguish but with dignity, there are groups of jackals and professionals protesters who promote violent actions, characters and groups that show and claim their membership in the mafia. I ask all citizens to report them to the police authorities,” warns the mayor of Palermo.

“This media attempt to connect hunger with mafia and crime is just an expression of racist and elitist narrative that looks to have a good excuse for repression while not understanding that hunger and desperation in the population can not be just stopped by decree or even repression,” an analyst said to Orinoco Tribune.

There are several council members who sound the alarm, including some from an area with high crime, Campania, where the Camorra considers that a golden opportunity presents itself. Ciro Buonajuto, mayor of Herculaneum, threatened by the camorra, has warned: “We have a youth unemployment rate of 75%, who works in many cases in precarious employment; now I fear the economic and social effects: usury, drug trafficking, camorra business can spread …”

“Attentive to the south, it can explode”
The unrest in the “Mezzogiorno” is echoed by the minister for the south, Peppe Provenzano, who in an interview today tells Repubblica: “Attentive to the south, it can explode. We must act quickly, the maintenance of democracy is at risk. You have to extend the income of the citizenry” (this is economic aid, around 550 euros on average , offered by the State to those who do not have a job).

In this context of a very serious crisis caused by the coronavirus, the dramatic speech that the President of the Republic, Giorgio Mattarella, addressed to the country on Friday night, is also explained: “We are living a sad page of our history. We have seen images that will be impossible to forget. Some territories, and particularly the older generations, are paying a steep price. Europe must understand the seriousness of the threat, or it will be too late. Further common initiatives are indispensable – added Mattarella-, overcoming old schemes that are already out of the reality of the dramatic conditions in which our continent finds itself.”

The well-known Italian scientist Silvio Garatini has said these days: “The meaning of life comes before the meaning of business. But someone has reversed the priorities.” Thinking of Europe, a diplomat said it in other words: “When you count the dead, you don’t count the billions.”