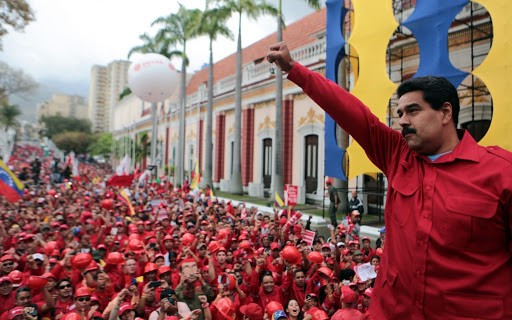 Once again Donald Trump’s impudence is raging against Bolivarian Venezuela. In reality, the great obsession of the white supremacist ultra-millionaire who misgoverns the United States is Nicolas Maduro. It is against him fundamentally and other high officials that he has now aimed all his guns, believing that the revolutionary government can be intimidated by his bravado. As if the first sanction decree by Obama back in 2015 that declared Venezuela of being “a danger to the security of the United States”, was not ridiculous enough, what can be said about this latest hoax cooked up by the Trump-Mike Pompeo duo, using as an excuse for this latest aggression by accusing Maduro and his government of being “narco-terrorists, arms trafficking, money laundering, and corruption, without a shred of evidence.

The timing of this scurrilous attack could not be more obvious. As the Bolivarian Government moves precious medical resources, depleted by the sanctions in place, to combat the Coronavirus, Trump is using the moment in the most sadistic way to distract from the health crisis at hand in Venezuela and the world. Unlike the Trump Administration Maduro’s government has acted swiftly in testing and social distancing and at this moment they have one of the lowest number of confirmed cases in Latin America with one death.

Trump resents Maduro’s enormous popular leadership, just as Bush had been banging his head against the wall a thousand times looking for the formula to attack the eternal commander Hugo Chavez. The current U.S. presidential figure is no different from any of the last American presidents: despotic, warlike, genocidal, ignorant, inept in politics, not counting the resource of weapons, invasions, authoritarian impositions, devastating policies of sanctions and corruption on a large scale.

For their part, Chavez and Maduro represent the opposite and that is why they had, and still have, the unconditional support of their people. To say Chávez’s name in the Bolivarian Homeland and also in Our America is to express the greatest expectations to which millions of Venezuelans aspired to and for years have fought to achieve. From literacy to recovering self-esteem at all levels.

In Maduro is the declared and loyal continuation of those same flags, the man who carried on his shoulder “the mother of all responsibilities” and tries to carry them out with all the dignity and solvency in spite of the aggressions from inside and outside.

That’s why the Empire has put a bounty on the heads Maduro and President of Venezuela’s National Constituent Assembly Diosdado Cabello as the “interlocutors” to eliminate first, and then take over the country’s wealth, which is what Trump would most like to see in the short term. But he is wrong from start to finish, since every time he has tried to generate destabilization in Venezuela he has had to retreat, losing his little battles and even being embarrassed among his own troops. He slipped with the execrable Lima Group, lost ground again when he tried to invade Venezuela with the consent of the puppet OAS secretary Luis Almagro and is still left out in the cold and unsatisfied as he continues to bet on a criminal nobody like Juan Guaidó.

How Trump must be cursing his CIA “boys” who recommended his Colombian pawns President Iván Duque and his manager former President Uribe Vélez who have tried and failed countless times to motorize invasions by paramilitaries linked to drug trafficking like Los Rastrojos and others. If the role the CIA played in “the delivery of fake humanitarian aid” in February of last year (where they brought together the most prominent members of the continental right-wing) was not enough, when the popular militias and the Bolivarian National Guardsmen stopped them in their tracks on the bridges bordering Cúcuta, now they have another failure to add to their list.

This time the agency brought a traitorous soldier Cliver Alcalá to lead a group of armed commandos to murder and create fear in the population but they were caught. They launched the operation to take advantage of the moment when the obligatory health quarantine was declared.

Beaten internally by his lack of control and organization to control the virus that strikes his own population with an almost non-existent public health system, Trump tries to divert some attention by attacking Maduro and Venezuela as an excuse.

With the help of Pompeo, who seems to think he’s a cowboy from some bad movie in his country, they have proposed a bounty of $15 million to stop the legitimate president of Venezuela. What do they think? That the Bolivarian people will meekly agree with such an idea? Do they imagine that the rest of the fighters of the Patria Grande will remain passive with their arms crossed in the face of such disdain for our continent, which is not and never will be their backyard?

No, Trump is going to stumble again, because Venezuela is not for sale. The Bolivarian population has been building a concept of a civic-military alliance that its enemies cannot penetrate by any of their aggressions; a concept they could never emulate.

Now when the whole world is experiencing a serious and painful moment, Venezuela, together with Cuba, is the most powerful Latin American example of popular self-defense against the virus but also against imperialist arrogance, which are not the same but are similar in terms of destruction.