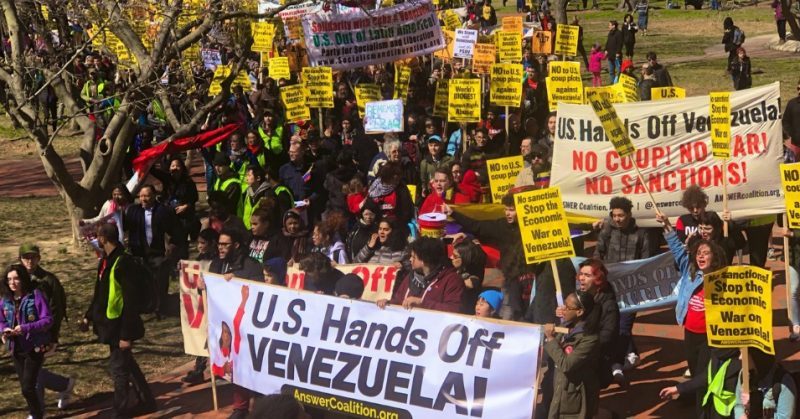 I wrote on June 14 about Reuters burying (for over a month) a study (CEPR, 4/25/19)  by prominent economists Jeffrey Sachs and Mark Weisbrot that links economic sanctions President Donald Trump imposed on Venezuela in August 2017 to an estimated 40,000 deaths by the end of 2018. As of January 2019, Trump made the sanctions even more severe.

The study is the clearest evidence of the devastating impact US policy is having on the people of Venezuela. Below is a list of English-language outlets that, according to the Nexis news database, mentioned the study as of June 17. They are overwhelmingly non-US outlets:

To be fair, Nexis doesn’t seem to catch Reuters articles or reprints in other outlets. Reuters did finally mention the study at the end of an article (6/9/19). Telesur English reported on the study, but is not on the list above.

Also missing above is an excellent news article that Andrew Buncombe wrote for the UK Independent (4/26/19) the day after the study was released. Having followed Buncombe’s reporting (as well as his Twitter timeline) for many years, I wasn’t surprised. Aside from monitoring non-US outlets to catch important facts that are “missed” by the US media about Washington’s role in the word, readers would be well-advised to watch for individual journalists who, even within corporate media, are willing to break from the herd.

Alternative outlets that covered the study (VenezuelAnalysis.com, The Canary, FAIR.org and Media Lens, for example) are obviously key to what Chomsky once called “intellectual self-defense.”

And let’s not forget two of the big outlets from which we all need “intellectual self-defense”: The New York Times and the Washington Post. As I write this, a direct search on their sites turns up no mention of the study.

A reprint of a lengthy Reuters article appeared on the New York Times website (6/16/19) with the headline “As Peru Tightens Its Border, Desperate Venezuelans Cling to Asylum Lifeline.” At one point, the article states:

The crisis has deepened since the United States imposed tough sanctions on the OPEC nation’s oil industry in January in an effort to oust leftist president Maduro in favor of opposition leader Juan Guaidó.

I guess they forgot to mention that Trump’s sanctions had already been linked to tens of thousands of deaths before he decided to make them more savage in January.

Featured image: Photo of protest march from a Venezuelanalysis report (4/26/19) on the CEPR study. (photo: @ChuckModi1/Twitter)