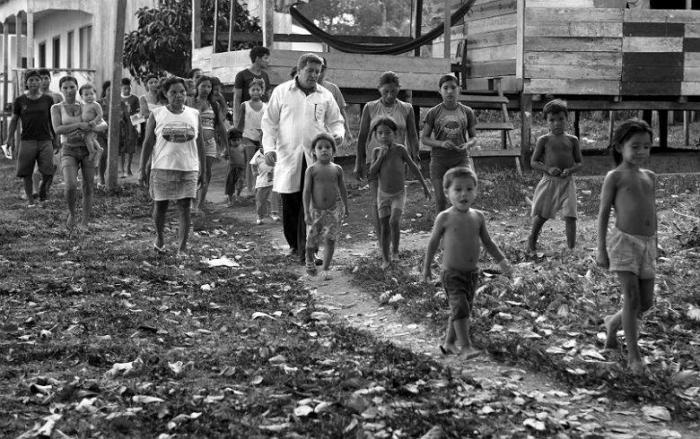 One truth that has to be recognized in what Donald Trump said in his most recent speech against Cuba was that our doctors work tirelessly and their living conditions are often below “normal” in some countries. The irony is that what he takes as shameful is what we view as an honor of solidarity and where his eagle eye sees slavery; our gaze is one of love and distinguishes our commitment to patients in great need. The conditions that the White House is referring to is one that he is making sure, with sinister efficiency, continues and worsens for our doctors and the people of Venezuela. This “abnormal” is nothing less than part of Trump’s regime change agenda.

The genesis of this attack, served a la carte to the right wing worm like representatives in the U.S. government -the ones that knows best how to pull the strings and make deals to promote counter revolution and misery while acting like they represent Cuba and all of Latin America-, is the re-election ambition of Trump.

Trump also wants to be president from 2021 onwards and to get his campaign off to a good start, there is nothing better than asking that part of the Floridian electorate for a shoe polish which, for any promise of attack on their homeland of origin, would give the vote to the devil himself in person. It is no coincidence that Trump jump started his campaign right in Orlando and stirred up the old ghost of the communist threat with the declared hope of improving his performance at the polls with the help of this diminishing sector of the electorate.

RELATED CONTENT: Trump Knows About Wars but not About Solidarity

What does this have to do with the diatribe against the management of our internationalist missions? Everything, because the downgrading of Cuba to the State Department list of governments engaged in human trafficking is another screw coming from Bolton, Abrams or Pompeo to tighten the machinery of sanctions to asphyxiate a small country that stands in its way.

Imperialism has said it and repeats it with a rattle of its own that Havana does nothing to move against the accusations of forced labor in Cuban medical missions abroad. “Observers point out that the government does not inform participants about the terms of their contracts, which makes them more vulnerable to forced labor.”

With that terminology they have twisted the rights, clouded the values and manipulated for centuries the history of this world to an image so deformed that it is unrecognizable to reality.

In its jargon of evil, totally contrary to the terms of solidarity, it cannot be understood that Cuba, after forming brigades with willing men and women, gives them in one sentence, the most detailed protocol of the whole mission and that is; they are going to save other people’s lives, even if theirs could be in danger.

It’s true, there are always a handful of deserters who auction off their abandonment in whatever way they can, but tens of thousands continue to respond, because the socialism that Trump whipped up against in Florida thrives on the island causing him to break out in a rash. It is also true – and this is pointed out by someone who has lived next to them for more than a year and a half – that once their mission is over, many of these medical professionals would like an extension.

One day there will be a chronicle report to show, with all forcefulness, that the United States is responsible before the world for trafficking of governments. It exploits them, divides them, deceives them, manipulates them, swindles them, pits them against each other and always betrays them, at a disastrous cost to its peoples. Everything, as in the old West, is carried out for a handful of money. By the way, the State Department is the main tool of such slavery.

If the 600,000 Cubans who have provided medical services in more than 160 countries in the last 55 years under the banner of the Revolution have been slaves; where is the most prepared, transformative, noble and sensitive work that could be expected from the human capital massively formed under the tinkling of capitalist coins? Has the State Department ever organized and sent a freer, more capable and qualified civilian mission to the countries that the White House has kept underdeveloped at gunpoint for decades than the ones sent in solidarity for decades from this small island of solidarity?

Will the NGO’s of the world write this report? I don’t think so, they, who make so much money at the expense of false values, are not going to recognize that Cuba has today, in more than 60 countries in Latin America, Africa, Asia, Oceania and even Europe, the freest – and most liberating – slaves that modern history has ever known.

The dutiful modern day scribes of the empire are more occupied in seeing and promoting Cuba’s support for Venezuela being forcibly taken away in order to bring down a good project that just happens to carry another capital sin – it is being carried out in a country of immense natural resources.

The man who has made cynicism his political trump card has no qualms about proclaiming that Cuba has to change its behavior on Venezuela, nor does he have any second thoughts or qualms about appealing to blackmail in any sphere.

After the Major League Baseball (MLB) leadership in December reached an agreement with Havana that would have allowed Cuban baseball players to join MLB teams without having to renounce their country, the White House blocked it before the first pitch. We have now learned that Trump administration would be willing to review this refusal as long as the MLB gets Cuba to reduce its “long-standing cooperation” with Nicolas Maduro’s regime. Now that’s what I call dirty game!

Isn’t Trump encouraging the human trafficking mafias that turned baseball players into boaters, swimmers and likely shark bait? Those who exploit and speculate in trafficking for political ends?

The president who halted the docking of cruise ships on the Island, who imposed a list of sites and services to which U.S. travelers must stick to while in Cuban territory, who came up with fanciful sonic attacks lacking any evidence, now dangles before us a revolver in one hand and a wallet in the other when he recently said on Fox New: “With the right move, Cuba could do very well, we could make an opening.” Poor millionaire… with so many checkbooks, but doesn’t realize that the right move was done, 60 years ago, by Fidel Castro Ruz!