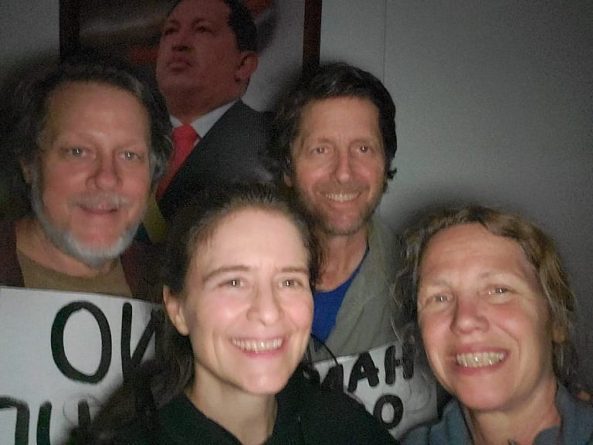 International News
May 16, 2019May 16, 2019 orinocotribune Defending the Embassy in DC, Embassy Protection Collective, Solidarity, you are our heros

A significant number of social movements and groups in Venezuela issued a statement on Wednesday in support of the protection collective at the Embassy of Venezuela in Washington, consisting of a group of people who defend the building before Carlos Vecchio’s intentions of taking the space, person who claims to be ambassador of Venezuela in the United States but who was appointed by the opposition deputy Juan Guaidó.

In a letter, the social movements recall that the constitutional government led by President Nicolás Maduro “has authorized only the activists of the Embassy Protection Collective in Washington to enter our headquarters”.

RELATED CONTENT: Urgent Message from the Embassy Protection Collective to US State Department

In addition, they point out that “we reject the claims of the government of the United States and of any government of another country, of breaking into our diplomatic missions, in violation of Article 22 of the Vienna Convention that clearly states that they can not be penetrated by agents of the host State without the consent of the head of Mission”. They also sympathize with “the North American movements and collectives that defend their right to peace, before a government that intends to lead us in a global and fratricidal war risking life on the planet.” Below the full text:

Given the actions of the United States Government whose president Donald Trump is at the head of the continued coup against the Bolivarian revolution, the social movements grouped in the platform of movements against the blockade denounce: We are a people of peace that defends its sovereignty and its right to build an alternative and solidary model to capitalism. We are the sons and daughters of Bolívar and Chávez.

We subscribed the Organizations and Popular Movements of the Bolivarian Republic of Venezuela today, May 15, 2019: